Today was one of my favorite days of the whole year! The annual "My Dog Loves Central Park Country Fair, smack dab in the middle of Central Park. There are probably several thousand dogs and their people attending (over 8,000 last year!) and it was a glorious day. 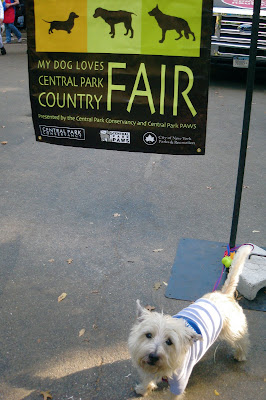 There were lots of booths with free dog treats, micro-chipping and information about becoming a therapy dog. There were dogs and kitties there for adoption, two guys auditioning dogs for David Letterman's Stupid Pet tricks, you name it! 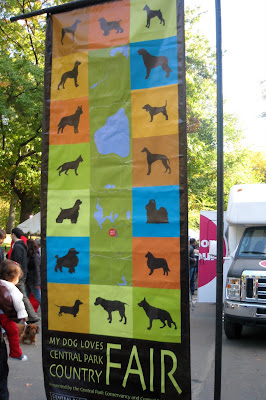 I went with my friend Jazz, an 11 year old Schnoodle who lives just a few blocks from the park, so he could let me know the best places to leave my pee-mails. 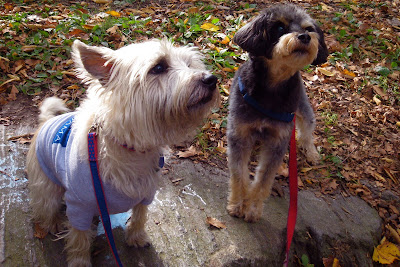 Here we are laughing at our Mommies as they try to get us to hold still together and smile for the camera "Cheese--burgers with bacon!" 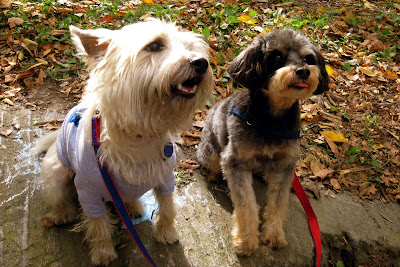 They have lots of fun things for dogs to do with their owners. There were spoon races where you had to run with your owner while they held an egg in a spoon without dropping it.
Mommy and I ran through this maze in 26 seconds! The lowest time was 13 seconds and we could have beat that if someone hadn't sabotaged the maze by dropping dog biscuits all through it. I was probably the only doggie that ate his way along the course! 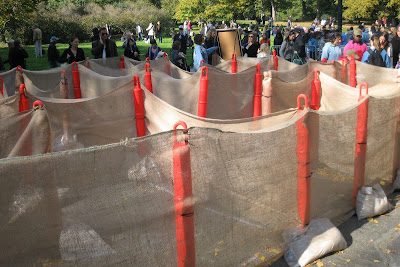 My favorite thing to do was the agility course! We had to wait 45 minutes to do it, because so many dogs wanted to give it a try. I had to jump over hurdles, through a tire like this (twice!), run through a tunnel, and then go up one end of a teeter-totter and down the other (that took a couple tries because I fell off a couple times until I got the hang of it.) I was much faster than the other doggies trying the course. 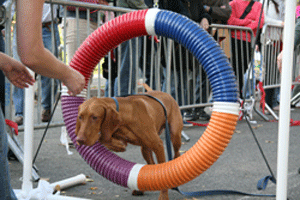 There was a pawsome costume contest for the most Fashionable New Yorker. I liked the doggie in the Yankees shirt myself.  (Do you recognize that Jack Russell giving his paws a sniff? More later!) 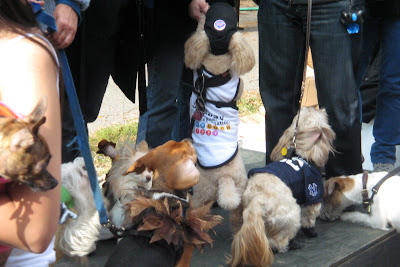 These were two of the finalists -- the great pumpkin pup and Frankensteindog. 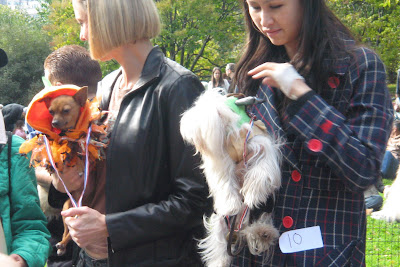 He was so small, I don't think you could make a pumpkin pie from him! 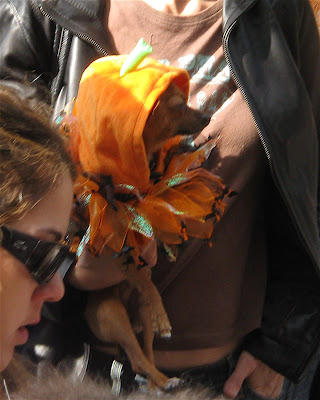 Okay, guess who the celebrity dog judge and owner were? Elvis and Dave from The Greatest American Dog!!! OMD!!! Elvis was our absolute favorite! Not only was he from New York, but he was the awesomest terrier!!! 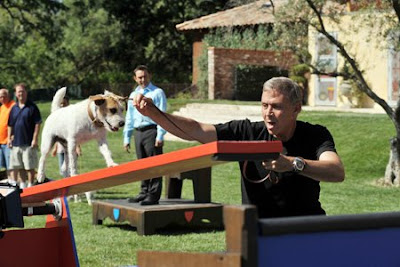 Look! I even got my photo taken with him! He was really swell, not a big showoff. Mommy thought he was soooo adorable and very sweet. (Elvis, that is.) Dave was very nice too. He told us that there were lots of rattlesnakes where the show was shot - one day they took away 13! And alot of the events were held in a horse corral so Elvis was very interested in the smells rather than the events. I don't blame him! He's a city dog, after all. 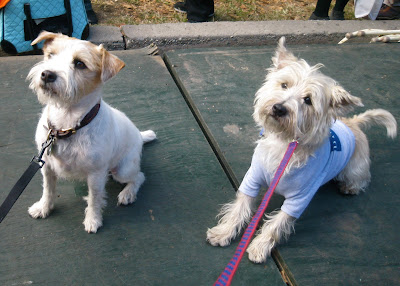 Wow. I can't believe I got to meet my terrier idol from TV!
There were also lots of book readings -- "Dog Tales"-- from new books about dogs. This fellow rescued the Chihuahuas that are on Broadway playing Bruiser in "Legally Blonde" from a shelter. From rags to riches - that's a true Broadway story on the "Avenue of Dreams...." 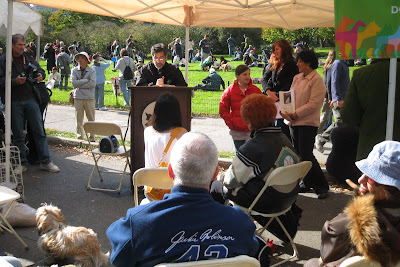 Just look at all the books about dogs! Mommy's favorite title was "Puppy Chow is Better Than Prozac." I don't read, so I'll just have to wait for the movie. (Although we did pick up complimentary copies of Animal Fair and Bark magazines - for the pictures!) 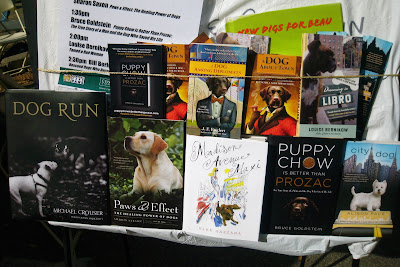 The event was hosted by a Cav, one of the organizer's doggies, who happened to be wearing this very excellent tee-shirt! 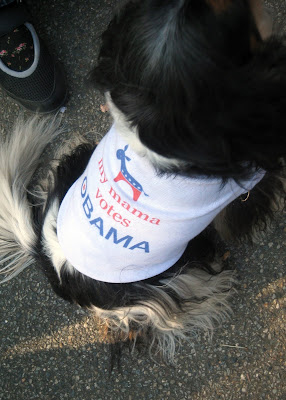 I was wearing my "Bark Obama" tee-shirt all day (www.petsvote.com) and we got asked about 1,000 times where we got our shirt!  So we decided to hit the campaign trail together! 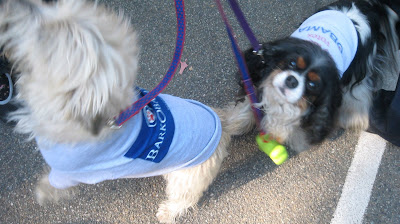 While there were lots of fun things to do (and LOTS of fun things to eat! Rachel Ray's new dog treats in Bacon or Peanut Butter are AMAZING!), the best part of the day was seeing all the different kinds of doggies, just hanging out together and having a great time on a beautiful fall day in New York.
Check out this assortment of pups! 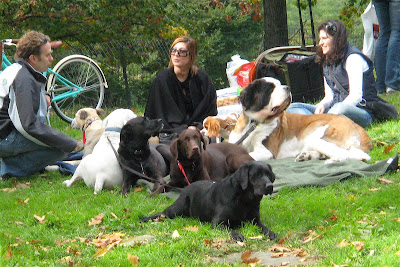 There were little teensy dogs.... 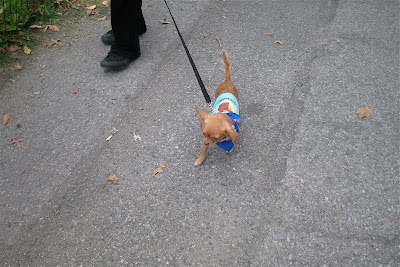 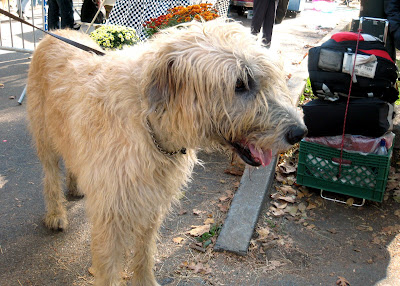 There were dogs from Germany (Wouldn't Lorenza look cute in one of these coats?)... 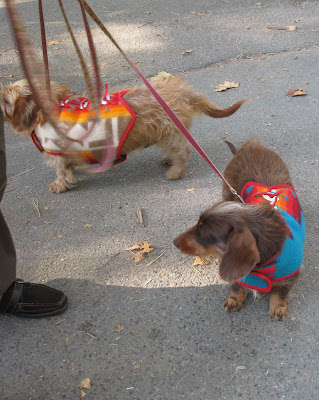 And dogs from Olde England.... 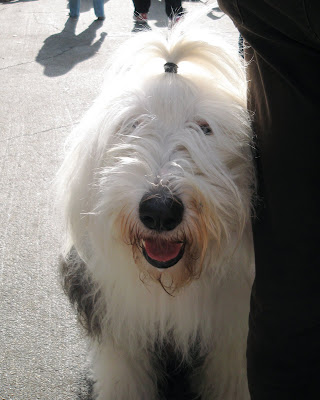 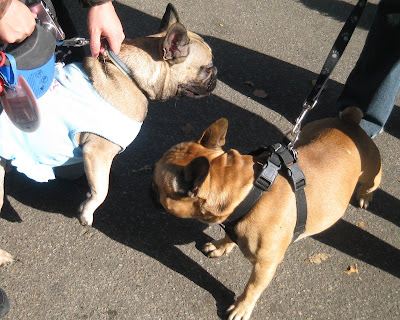 And everyone got along. It didn't matter if they were big or small, old or young, or where they were from or what color they were. If they were beautiful or ugly, were purebred or mutt. 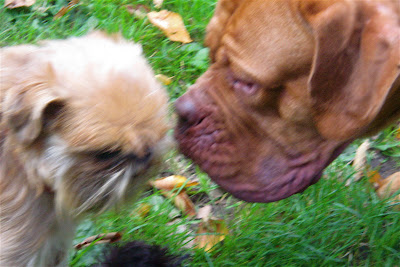 Next to the Fair was a beautiful field where hundreds of dogs were romping around playing and rolling in the grass and laughing and barking and having a marvelous time.  I played ball with a 9-month old Cockapoo named Harley, she was delightful! 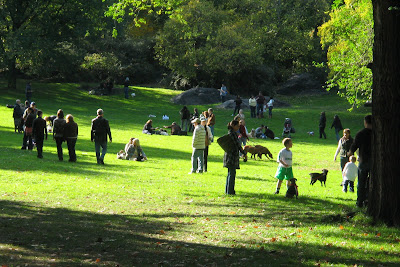 At the end of the afternoon, nobody wanted the day to end. It was magical! 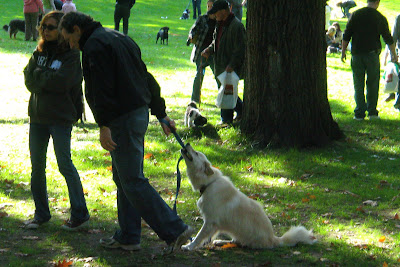 On our way out of Central Park, we walked through Strawberry Fields, the beautiful and peaceful memorial to John Lennon, who lived (and died) nearby. People had brought flowers and arranged them in a peace sign on the "Imagine" mosaic.... 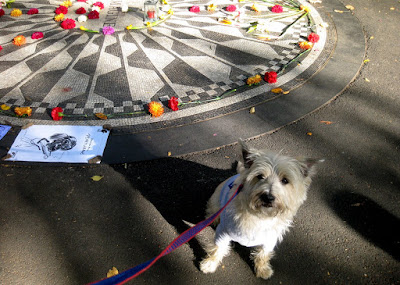 I wished, and not just for the first time, that people could be as smart as dogs and get along with one another as well as we do. Our sole purpose is just to love and be loved. 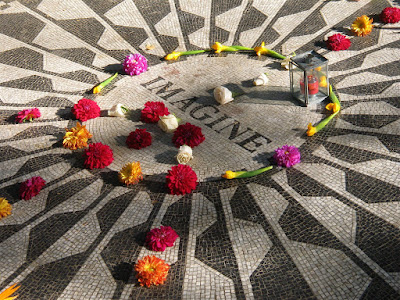 I hummed a little of John Lennon's song "Imagine" all the way home on the bus.
Imagine all the people
Sharing all the world...

You may say I'm a dreamer
But I'm not the only one
I hope someday you'll join us
And the world will live as one.
Posted by Unknown at 6:46 PM

w00f's Petey, Elvis wuz our favorite too...wow, u meet sooo many cool pups at the doggie walk...me never gits to go to places like dat...

Hi, Petey!
You had a pawesome day!
All those friends, big and small to meet and have fun!
I wish I could be there with you!
Kisses and hugs
Lorenza

I'm glad woo had a pawesome day too!

My Sunday blog will be about MY grrrrreat day!!

Woo surely had lots of difFURent pups to meet and greet!!!

Petey
I am sooo jelly..stoopid Mommmi had to go to Bwookly and so we couldn't go to this most impowtant soial event of the season..sheeesh..Bwooklyn..I ask you
It was a glowious day
smoochie kisses
ASTA
pee ess..I loved Elvis the most too..did you get his pawtogwaph?

iqmhwThat does look like a truly great day, Petey!

Your Pals,
Sen-Chan and Tom

Oh Petey, what a wonderful day! I almost felt like I was there with you. How neat that you got to meet Elvis. Thanks for sharing with us!

No doubt, the world would definately be a better place if humans were more like us...

Oh Petey...what a pawsome day!!!! And you are much much cuter than Elvis!!! You are so right about getting along. I just don't get why hoomans are so stupid sometimes!

Hi Petey
What an adventure. All those beautiful and famous doggies. I agree about doggie. We don't worry too much about how different we are-- we all smell about the same.

Ohhhh Petey, what a fantabulous day! Maybe next year you and Asta can host a pawty and all of us can come.

wow Petey, that was a fabulous post! you sound so happy and we can see why. that event was pawtastic. we lovelovelovelove your schnoodle friend - you do know that i, Bailey, am a schnoodle, right? and we love Elvis and David, and we love those fun events, and we love that tribute to John Lennon. it looked like a perfect day. we wish we had been there, but thanks for telling us all about it.

You picked a lovely day for the big fair. Looks like tons of fun. Glad you have your priorities straight and stopped for the foodables in the maze.

Every morning, Big Pupi and I explode from our crates and we're just certain it's going to be the best day of our lives. But seriously, your day really would be the BEST day. Central park looks AMAZING! And Pupi and I loved the cocker spaniel on the event banner!

OH Petey,what a day!!!!! If only we could have gone!! Can you imagine meeting your TV idol???And playing all those games??? And eating all tha stuff???Sigh but we are glad you had such a wonderfull time.We campaigned today too in our bandanas made by Lenny.......Now we are going to sing Imagine too...Love and kisses A+A

It looked like an absolutely perfect day to us. I certainly loved the dude in the Yankees uniform!! We wish humans could get along as well as us doggies too!

What an awesome day you had, Petey! You got to meet so many new friends!

Hi Petey...what a great day! WOW loads of dog things to do and thousands of dogs!!! How cool!!!

Oh my gosh! What a sooper fun event! I would have loved to be there joining all those games...

Hi Petey,
What an incredible event!! It's toally pAWESOME... I can see that you and all the other doggies are having so much fun..
I can only wish and IMAGINE that I am there with you too!!

What a great day out! Looks like you had a really good time.

Golly!! You had the best day, didn't you?!?! It all looks so very cool. And Elvis the celeberty! WOW. We are star stuck. Mom loved John Lennon and the Beatles. Even though we love the country, we think it must be exciting to live there!!
Hugs & Hi 5s
Sunny & Scooter

Um...did you really ask me to marry you...for my bacon?

I sent Toffee a Bacon Bush...waitie till Eric finds out bout that one!! Actually, I told him....hahahahahahahaaaaa!!!

Barkin' at ya sweet Petey!

What an incredible event!
I was going to ask what was on your tee-shirt but you answered my question as I read through the post. I am so glad you had a picture perfect fall day for the fair. Your pictures were so pawsome! My mom is impressed that you and Elvis posed so well together - Riley would have been a very bad boy.

Oh and that memorial to John Lennon is great! We have always liked the song "Imagine."

Petey, Wow! That certainly was the bestest day pawsiible. I'm wagging for you that you met your idol and were able to play and do everything you wanted. What a bummer you didn't win the eggie and spoon. Hope you got to eat the egg as a consolation? Thanks for showing us every thing...and thank you for taking us down to strawberry fields furever...

what a fun day you had there pal