What a great party!!!

While our bloggie party at the Tower of London was terrific fun, I also got to attend the annual Spooktacular Party at the Dog Run. It was fantastic! A perfect clear night, pleasant temperatures and loads of scary stuff! 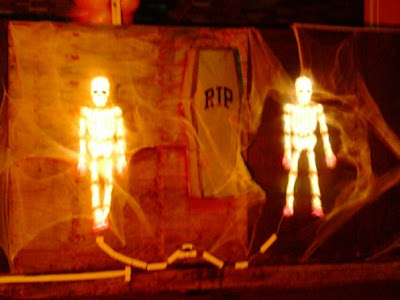 Hmmm, I guess these MilkBones have extra calcium to make them glow in the dark! 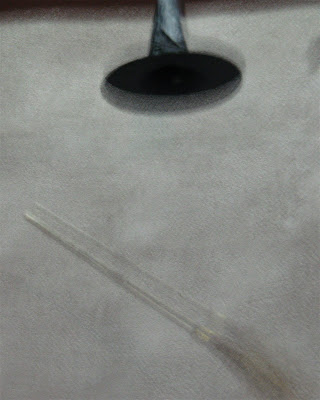 There were invisible witches flying over the run on their broomsticks. (Although it looks like we may have hit one with an errant tennis ball!) 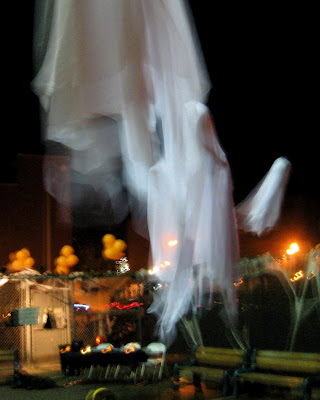 And lots of spooky ghosts flew overhead...the spirits of Tennis Balls Past.... 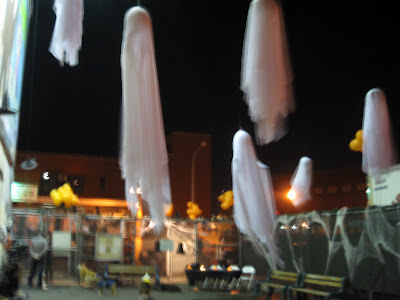 There were bats dangling from cobwebs, black ravens along the top of the fence, a huge spider web on the wall and a trail of black rats dancing out of the corner! 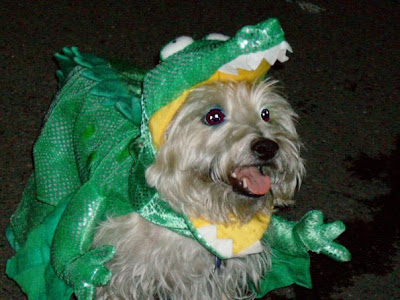 Here I am in my dragon costume! I wore it for over FOUR hours and would have kept it on longer but Mommy said I couldn't sleep in it. When I ran for the ball, the wings would fly out and when I wagged my tail, the dragon tail wagged, too. I WON A PRIZE! A gigantic basket filled with treats, toys, balls and a new towel for when I go to the beach. Yipee!!! 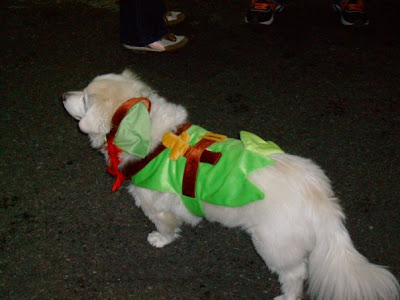 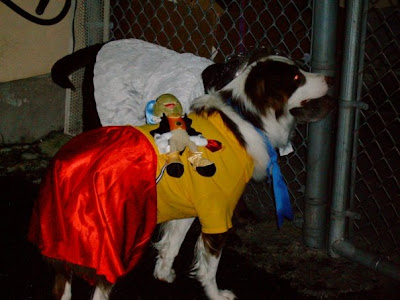 And his brother Butch was Pinocchio (which is kinda funny since he has an extra long nose!) I don't have any pictures of their sister Jesse, a German Shepherd mix, who was a dark angel or their little brother Mickey, a blonde cocker spaniel, who was a policeman. Mickey had a neat little hat that he wore all night, hence winning the prize for THE MOST DURABLE COSTUME! 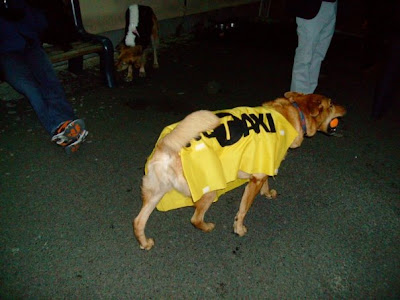 The prize for BEST LARGE DOG went to my pal Sadie, who was a yellow taxi cab! 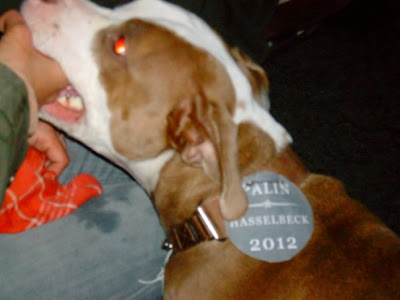 Piney's eyes look spooky here -- maybe because he was a Pitbull in Lipstick!!! Really! He had on red lipstick, a dark wig (very briefly), his "Palin/Hasselbeck 2012" button and a price tag on his collar for $150,000! He made Mommy laugh and laugh and laugh! 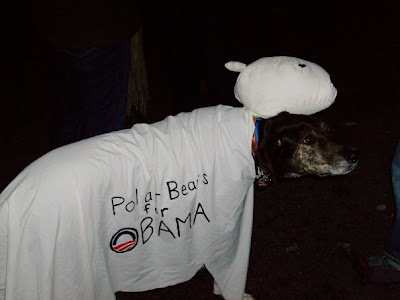 We also liked Fern's costume! She was a Polar Bear for Obama and won "MOST ORIGINAL."
There was another winner, Pimm, a golden retriever, who was a Freudian Slip! Very intellectual costumes, mais non? 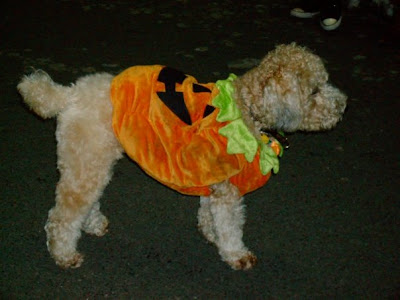 Penny is one of my gal pals, she's a little Wheaten and looked adorable as a punkin! 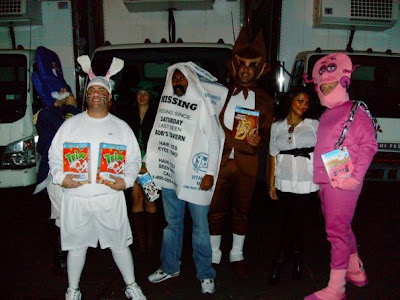 Our dog run is next door to a bar called the Brass Monkey. This group was going there - Capt Crunch, the Trix Rabbit, Count Chocula, Frankenberry, some Lucky Charms and of course, a carton of Milk! Mommy thought they should have carried weapons so they could be Cereal Killers! 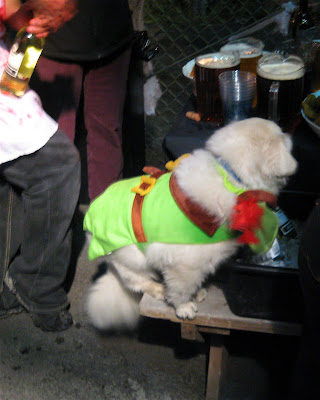 Speaking of bar, Lyle tried to sneak out for a brew and a jalapeno popper, with a couple of mozarella sticks on the side! 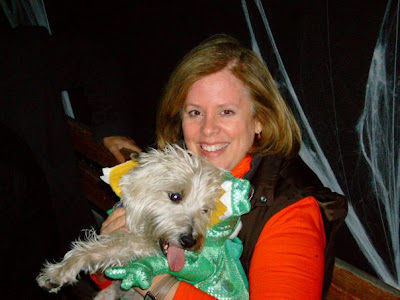 Mommy and I had a wonderful time. It was the best Halloween party ever! On our way home, we walked back through the park to see the Pumpkin Patch. There must have been about 100 Jack-o-Lanterns all a-glow with lots of people admiring them. I got asked to have my photo taken alot! (Though some people thought I was a dinosaur or an alligator...) 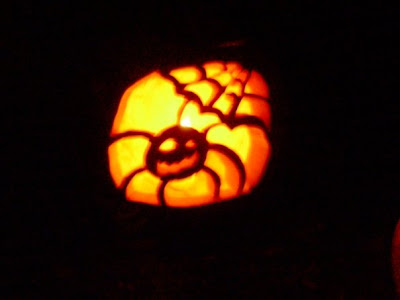 Here are some of our favorites - so creative! 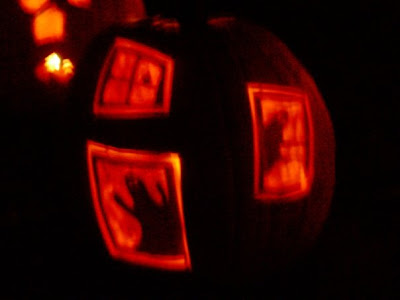 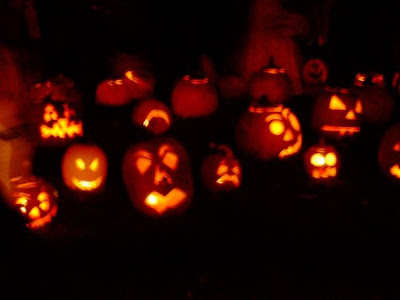 Are you scared yet? Hope everyone had a wonderful Halloween and got lots of treats!
Posted by Unknown at 8:57 PM

Hi, Petey!
Thanks for sharing all those pictures of your Halloween party!
Sure you had a great time there and you won a prize!
Congratulations! I love your costume!
Kisses and hugs
Lorenza

Petey
Congwatulations!!! You did look pawsome..I saw the faboolous decowations at the wun, but due to Mommi and Daddi's , um mistake, we went at the wong time..I missed the pawty of the yeaw..booo hoooo
I'm glad you had a ball..I love the costoomes all ouw fwiends wow, thank you fow at least letting me see them in pictoowes
smoochie kisses
ASTA

That looks like such a wonderful party, Petey! It surely is one of the advantages of living in such an exciting city!

Your Pals,
Sen-Chan, Tom and Tama-Chan

What great pictures, Petey! We can't believe you kept your costume on for four whole hours!

Petey, course you won. Knew you would.You looked totally WICKED!!!Mommy too ( the best kind of wicked) in that fabbie orange woolie.The run pawty looked 'mazing and all those intelligent doggies too.Mom laughed at the pitbull in lipstick..one of them is banned here!! Are all those ghostly tennis balls your old ones,hee,hee?

Those pumpkins are fabbie..sigh we only saw 1 here and Mom forgot to do one this year..no fun at all. Glad you both had a fun time though.

Glad that plane you chartered got you home in time to join in the fun.

Oh Petey...you looked amazin' in ur costume...NO WONDER you won a prize! Those pumpkins are incredible!! We so wish we coulda been there!

Pee ess...did you say there is a difference between Macy's and Barney's??? I thought they were the same thing....

Wahaha... Cereal Killers?!! THat's a good one..
I love your little dragon costume, Petey!! You sure derserve to win something!

Dropping by to say hello. Hope you had a good weekend.

Hi Petey,
I loved your dragon suite, you looked so manly and powerful!
You know in the old days, dragon symbolized for the King in some Asia countries.
King Petey, sounds terrific!
I'm so sorry to say this but in the pic that your mom and you posing together, I don't think you're the most photogenic one, ooops, I'll take it back, you and your mom were so equally photogenic!
Please come visit me, I have a "kiss and tell" double dating story to share with you.
Cheers!

Really great costumes. All of them including yours! Must have been a really spooky pawty.

hi Petey, it sounds like you had a great halloween party. we loved seeing all of those cool costumes. sometimes humans are pretty creative. we liked the polar bear one and of course, you look adorable as a dragon.

What a fun pawty...You look great as a dragon...Congrats on winning the prize...

Petey..we LOVE your costume!! That looked like a cool party!!!! Wasn't that a blast in London?? We will have to do that more often......Too bad Arch was heavy into the smoothies and slept andfainted the whole time..Love A+A