I love Paris in the (almost) Springtime!

As promised, Eric made a few calls on the royal phone and persuaded his pals at British Airways to toss him the keys to the retired Concorde, for a quick spin across the big pee to pick up me, Lacie and his darling Toffee. 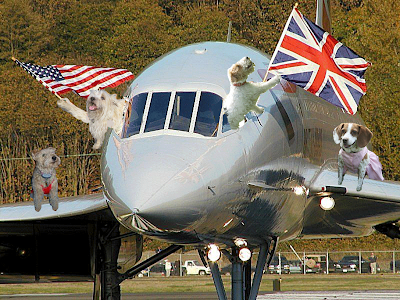 Before we knew it, we were landing at Charles DeGaulle in Paris~we cracked the windows and waved our flags to celebrate our birthday weekend (Toffee's was last week, mine is next Thursday).  And where better to celebrate than in Gay Paree!!!
Still swooning from his romantic Valentine's weekend with Toffee in London,  Eric felt like recreating that classic romance, set in the city of love..."I love your furry face..."

It got us all a-singing as we hit the town!
"I want to step out, down the Champs-Elysees,
From the Arch of Triumph to the Petit Palais.
That's for me....Bonjour, Paree!"

"I want to wander through the Saint-Honore,
Do some window-shopping in the Rue de la Paix,
That's for me....Bonjour, Paree!" 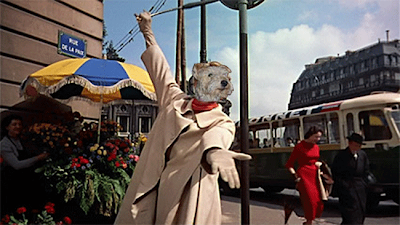 (I think Lacie was actually asking me for more Euros when this photo was snapped.)
"We're strictly tourists, you can titter and jeer.
All we want to say is La Fayette we are here
On a spree...
Bonjour, Paree!!!" 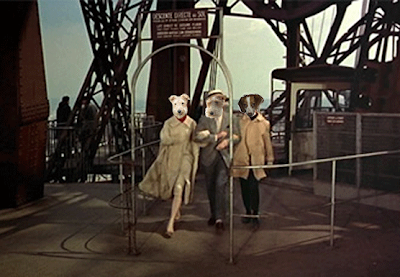 Toffee then decided to recreate one of the most famous scenes from the movie...when the beautiful young model (Audrey Hepburn) comes gliding dramatically down the staircase at the Louvre, with Winged Victory behind her... 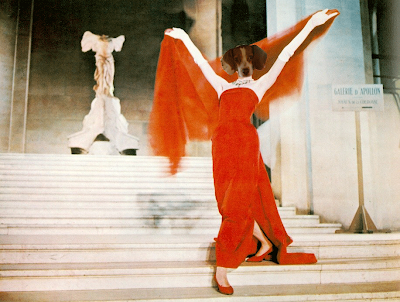 Lacie inadvertently recreated a scene similar to one in the movie as well when we went to see the ballet at the Palais  Garnier, alson known as the Opera de Paris. (You may remember it as the setting of Phantom of the Opera. It is now home to the magnificent Paris Corps de Ballet.)
Well, the curtain had just gone up on the first act when an usher came to escort Lacie out for munching on popcorn! With her mouth open! She stormed out in a huff. Unfortunately, paparazzi were waiting and caught this shot of her which appeared the next day on the front page of Le Figaro! 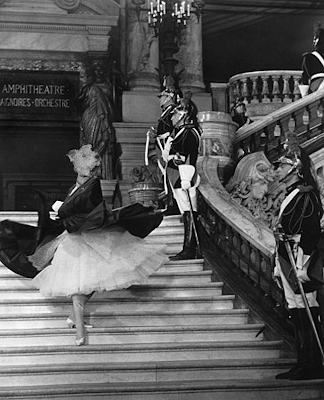 Meanwhile, Eric and Toffee—who have clearly lost their heads—headed to the balcony for a bit of snogging. Let them eat (pup)cake!

Her feathers soothed, Lacie and I headed to Montmartre and the famous Moulin Rouge. Before I knew it, Lacie was transformed into a modern-day Jane Avril, doing a saucy can-can! 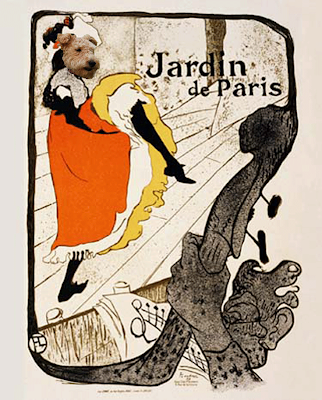 Where were Eric and I while the girls were up to such adventures? Enjoying a bagette or two as we basked in the sunshine in our new berets and ascots. We're a couple of chic chiens, n'est ce pas? Oh oui, mes petits!!!

Of course, Fall Fashion week in Paris is later in March, but Lacie pulled some strings (actually, she bit the store manager) and got an invitation for Toffee and her to preview the Spring Couture collections. Note the "Square Dog Shoulder Pads" - a must for Spring 09!
Who needs a recession when you can make such a fashionable impression?
I think they have that certain "je ne sais paw."
(Especially wearing those chapeaux!)

As the sun set over the Seine, Lacie and I went crusing on a romantic bateau mouche past Notre Dame, the Musee D'Orsay and the Eiffel Tower. Then I noticed the special hot air balloon she had arranged to fly overhead as my birthday surprise! (You'll never guess who was aboard...here's a hint - they've been "floating on air" since Valentine's Day!)

On Sunday morning, we popped into the famous Cafe de Flore in the heart of St. Germain des Pres on the Left Bank (Mommy's favorite arrondisement!) for "un petite dejeuner" before we headed back to the airport. A little cafe au lait, some buttery croissants with fresh butter and preserves...oohlala! 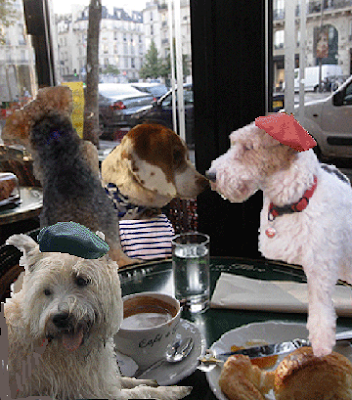 Eric and Toffee indulged in a little "French" kissing while Lacie looked for the waiter to get another pain au carob. And me? Well, I thought that this was just about the best birthday celebration ever!
And now...back to New York to celebrate Mica's 18th birthday!!! (That's a whole box of candles!)

You just answered my question from the last post! You and my girl share the very same birthday (though my girl is wayyyyyy older)!

That looks like a FABulous birthday celebration to me! My girl should be so lucky! Sounds & looks amazing!

What a great Birthday Celebration...

Ahhhh, young love. I remember those days. Now that we are more mature, Miss S and I just cuddle by the fire.

Works for me
gussie

Me and Toffee recreating I love your Furry face,I'll frame that one for pupcake. And ooo lalalala,our howling certainly drew some attention didn't it? (BTW it wasn't you Lacie was begging euros from from Petey, it was that well known french crooner Sacher Dogtell)

Doesn't Toffee look dogalicious pawing it down the stairs
at the Louvre? And Lacie getting thrown out when she was munching on the pupcorn....Sacre Bleu!!!

Though both our foxie chic chicks looked the dogs in the new Chewnel outfits eh? And you Petey, always so dashing and debonair. Asta chose your togs well my friend.

I'm certainly wagging it was your best birthday ever. And I really won't tell what happened on your ROMANTIC CRUISE with Lacie to make it so!!!! Your secrets are safe with me,my barkbox is sealed.

Thanks Petey for the best double date ever. Let's do it again.Wiry wags my bestest pal. Eric xx

Wow, what a fantastic birthday celebration you all had! Rosie is swooning at the 3rd photo down...ahhh, you look so dapper Petey! Great holiday snaps, well done!
Slobbers xx

Petey!
Thank you so much for inviting Eric and I on a double date with you and Lacie! I had the most wonderful time - especially that last little kissy face episode with Eric (tee hee).

Thank you so much! You did an incroyable job showing us all the terrierific spots around the city of lights. This is the best birthday ever!!

Now Petey...why in the the world did they kick me out for eatin' popcorn? And they didn't seem to like I removed the (now portable) bidet from the hotel room to carry around with me. I know it took an entire seat up next to us, but you can't expect me to eat salty popcorn with out my coke zero bidet style...honestly they were so rude to kick me out. You laughin' didn't help at all....

Thank you so much for givin' me that plastic card to charge a dress for Khyra on....she's gonna love it! Try to 'splain it to ur mom, ok???

As for that cruise and it bein' ur best barkday ever and Eric keepin' his barkbox shut??? (Lacie giggles...) What happens in Paris stays in Paris...why did you suggest I go into a bakery and try to sell myself as a French tart...for ur stoopid peeeteet day jun ay???? Sniff...

Thank you for a wonderful amazing fab weekend...those dresses you had picked out for me were bootiful....thank dog I brought 25 empty suitcases...the 26th only had my essentials...

What a great birthday you had. Cheers =)

Hi, Petey!
Thanks for sharing all the pictures of your wonderful trip!
Glad you all had a great time celebrating!
Kisses and hugs
Lorenza

What a fabulous birthday celebration you all had! The buttery croissants sound so yummy to us!

Oh shameless ones! We are loving those photos of you guys.

Crikey! You sure had a ball!

(sorry I don't speak any Francais except for Comment allez vous so I hope you are tres bien after all the gay Paree excitement!)

Paris looks like so much fun. Happy Birthday to all belated and early. We stopped by to wish Mica a Happy Birthday. ~Socks, Scylla, Charybdis & Fenris

OHH LAA LAA !! First...HAPPY BIRTHDAY(early) to you and HAPPY BIRTHDAY to MICA(we agree with Asta she doesn't lok a day over 9)It looks like you all had a wonderfull day and how handsome you look in your berets!!!!And the spring Chanel looks DIVINE!!!! We are glad you all had a lovely time........PL2 says that we all have a better time than she does...oh well Love A+A

Looks absolutely fabulous and I can't believe how well Lacie behaved. You look smashing in your suit, Asta did a great job advising you.

Petey, i'm sure this birthday celebration is unforgetable, your reportage is full of Paris 's "atmosphère".
Best
ViVi & AB

You bring the springtime to Paris, Petey!
Whenever you go, you always have wonderful time, you live your love life to the fullest, Petey playboy. You're my hero!