Revenge of the Flaky Lakie

On our recent trip to Paris this past weekend, a certain Lakeland Terrier from Pittsburgh who lives with a Wire Fox Terrier and an Airedale but who shall be nameless, apparently mistook this: 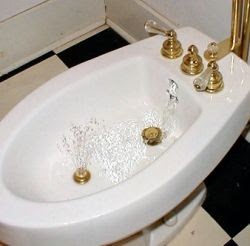 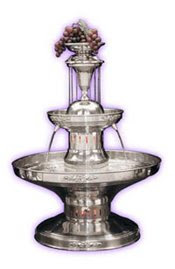 Which she proceeded to drag around Paris with her, quaffing Coke Zero from it at every and all opportunities.
This was despite warning a certain brown and white girlfriend of hers not make the same mistake.
Instead, once she found out that she truly had a "potty mouth" she took her revenge on three poor hapless terriers. 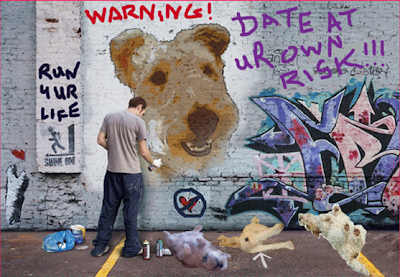 Here first victim was Eric Square Dog, next she came after me, and finally, Archie wandered in, wondering why his so-called girlfriend had already filled 4 Little Bark Books less than two months into the new year.

Several empty cans of Mango Gas Triple Strength were found near the victims, along with a warm cup of Coke Zero, a furminator blade, and a black and gold Terrible Towel. There was also a pink bedazzled cellphone, on which the last call had been made to a certain Miss Asta of New York City.
While Mango Gas is toxic in high quantities, it is not lethal, however it can stun its victims, rendering them unconscious for up to 12 hours.  It is also highly flameable.
Police sketch artists have been painting mugshots of the alleged perpetrator across the United States, United Kingdom and Australia. Interpol may be called in should more victims be found.
In the meantime, I'm sleeping off my attack...dreaming of a Rosier tomorrow! Sweet dreams indeed!!! 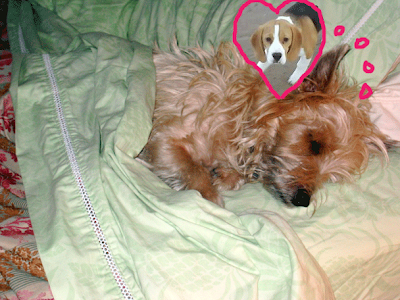 Gee that flaky Lakie, sometimes she can be a right pain in the DERRIERE.

But something good came out of her silly payback cos that that Mango triple strength gave me an idea for our Spa Range. (BTW sales still on the up despite the climate. Horrids have sold out again. Turnover was just under a million for the first quarter) Somedoggie will be sorry me thinks.

Anyways. Back to the Spa range.I'll get onto it.Let's make a triple strength MANGO ROLL ON.

I KNEW you guys were going to have adventures, but this is a little much. Where was little Toffee during all of this? Hmmm?

And, who are you dreaming of in that last photo, Petey? I can't even keep up with you guys. It's a different pup every night for you.

Whew! Revenge, in this case..may not be sweet at all

But this little lady does have silky ears too and a gorgeous singing voice...

ooooh...did you see Monsieur Eric using the french words there? Handsome and bilingual - no wonder he is such a great french kis...oh, nevermind.

Happy eve of your birthday eve!

Your package should be there tomorrow. Mom insisted on shipping it in the partially chewed shopping bag!

pee-ess: I knew all along that you were not dreaming of me 1) you are Eric's best bud, 2) you are loyal and 3) that beagle you can tell is a purebred beauty!

Umm Petey
Sowwy my mistake..who is she???What's wif all the beagle mania..awe you off tewwiew kids???
Sad smoochie kisses
ASTA

NAK and The Residents of The Khottage Now With Khattledog said...

I'm still wondering what she did to that poor horse to make him gallop off like thru the streets of Paris!?!

And that's just for starters.

I don't even know what to shriek.

I think I need to go lie down.

It feels like my blood pressure is up. To say the least.

It was all too much for the little Lakeland darling.

HEE HEE HOO HOO HOO HAA HAAA.....Oh boy ARchie is having one of his laughing fits and is rolling oall over the floor...Say Petey...who is that stunning girl?? We can not keep up with you either!! Love and ksises A+A

Hey Petey, been laughing all day bout our adventure with Lacie. See she's now having a a Flakie Lacie Fit. The Floosie.

Oh no! Poor (edit:anon) has gone into hiding incase Lacie hops on a plane to wreak revenge. She is starting to wonder if this little Casanova is worth it....it seems he's dreaming of a different lady every night...but then, he is a Cairn...and his heart truly belongs in Bonny Scotland, sorry Lacie!
Sweet, slobbery kisses..from..you know who....XX

Oh our dawgness, are you ever in big trouble now Petey! Hmmmm, seems I Butchy am the only wirey boy that has dated Lacey without getting into trouble, hehehehe. Must be my elderly charm, tee hee.
Luv & Wirey Hugs,
Butchy

I would say that payback is pretty mild, but still quite funny. LOL. I should consider bottling some of my gas to keep tanner out of the snuggle ball.