Terriers get their revenge!

By now you've probably heard about the travesty at Westminster -- how the well-meaning winners of the Airedale and Cairn breeds were unceremoniously excused from the ring because their handlers had previously worked for the judge. Grrrrr. The thought still makes the hairs stand up on my back, just as if an enormous black lab was coming my way.

You see, we terriers got our revenge. You may not yet have seen these horrifying photos of Madison Square Garden, home of the Westminster Dog Show. Apparently, it's caught in a stinky yellow maelstrom of pee! 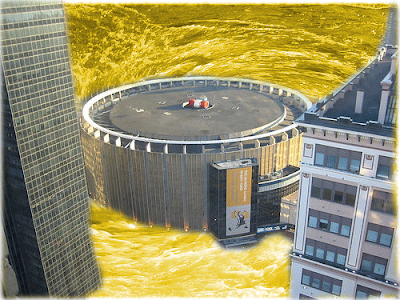 And how did that happen, you may ask? Well, us terriers are a rather international crowd. Once the word got out, I simply placed a few hundred well-filled water bowls around Madison Square Garden and just waited for all my buddies to show up, have a good long drink, then start composing some lengthy pee-mails as to how they REALLY felt about the judging. 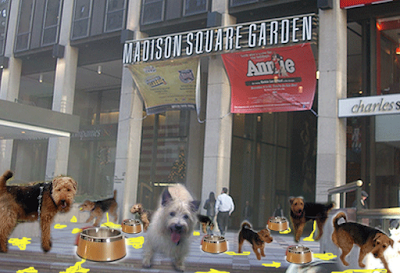 I think the results speak for themselves.

As a graceful participant, I'd also like to extend our congratulations to Stump, the 10-year old Sussex Spaniel who won Best of Show -- that's the first time his breed has won in the history of the show and you've just gotta like a floppy old fella named "Stump!"
Posted by Unknown at 12:24 AM

Wahaha.. I guess revenge is sweet (or possibly salty in this case)!!

What a great and subversive way to get the attention of EVERYONE who was at the dog show. I hope the judges' cars were all flooded with pee too. Brilliant idea, by the way!

You should be a union organizer, man!

Yeah a big stream of piddle is exactly what they deserve. Good job Petey!

Well done Petey! Gosh, I bet my brother Floyd would have helped out in honor of Grandpa Angus. Mastiff pee!!!

Petey: That was a great relief, sorry we had to pee and run.

That sure is a lot of potty! Hahahaha!

That was khwite the showering of support!

Hehehehe! Toooo funny Petey. Your little scam, not excluding you from the show. What's that all about? Can't be right. Any dog called Stump deserves to win (unless he's a black scarey lab)

Hahaha, too funny! Can you send some of your buddies to Birmingham, 2nd week in March??
Slobbers xx

We're thinkin' that Stumpi or whatever his name is, is going to have a few splendid years left as procrator of as many mini Stumps as possible. Um..we may have the name wrong.

Hey...that snap Mango posted of the Terriers in the ring...you don't have a copy of that you could post so we could bigify it? We wanna see ALLLLLLLL the details.

I'm strongly suspecting that that flood of pee was mostly Scruffy. That dog has seven bladders.

So when is our date, Petey??

You're not gettin' cold feet are ya?

Congratulations to Stump!
I can pee help!
Kisses and hugs
Lorenza

holy cow, you are definitely in the running for the stain award with that effort. AMAZING work guys.

We saw the news on tv yesterday too... Yeah for terriers

I admire you, Petey, for taking matters into your own hands, er...never mind.