After a day of resting up following Eric's AWESOME Stag Night for me, me and the lads headed on up to Scotland, accompanied by Joey's kid brother Tanner. Apparently, when Tanner heard the wedding was going to be near some place called Lossiemouth, he decided it was just a typo and probably the home of his childhood crush....Lassie. 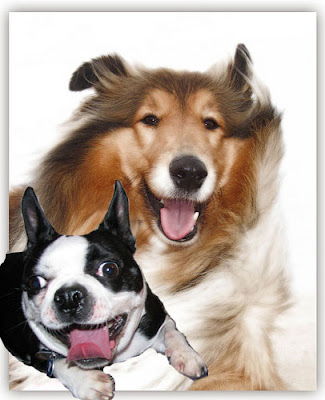 With a little luck, the two of them would meet and perhaps even name a town in Scotland "Tonnermouth" in his honor. (You see, in Tanner's mind, Scottish is a separate language from English, and "a's" in words can become "o's." You'll see how this logic progresses in our tale...)
So Tanner borrowed the keys to Eric's Zoomer and off he went in search of Lossiemouth, or Lassiemouth as he liked to call it. He hadn't gone far when a town sign caught his eye...
"Duffus? DUFFUS! Why, this must be the Scottish word for Doofus! Joey always tells me I'm a Doofus — perhaps this is where all my ancestors come from!" 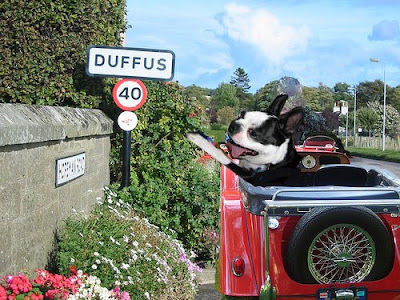 "After all, we do have the official tee-shirts declaring that I am a Doofus...." 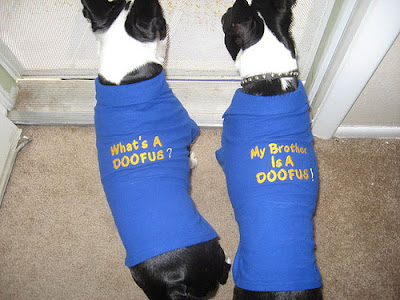 "....maybe I really AM Tannerheart after all!" 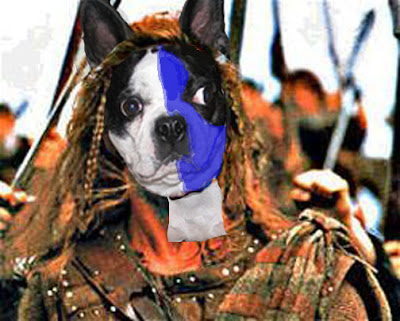 So imagine his joy and amazement when he discovered Duffus Castle... 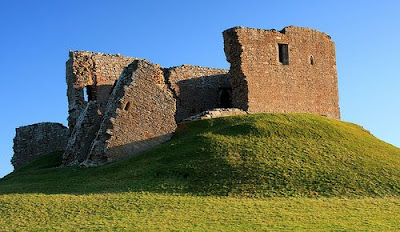 Thank Dog, Joey showed up.
"Tanner, it's DUFFUS Castle, not DOOFUS Castle!" he shouted, "Though since it's made out of rocks, maybe you are from here..." 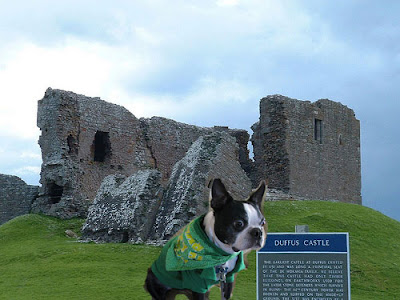 "Now get back in the car before you miss the wedding!" 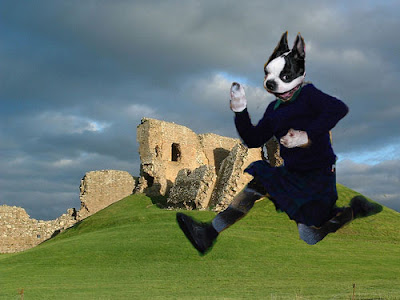 Blimey...now there's a turn up for the books....The Doofus has land and title now? Joey better watch his step!
Cool pics (yes, we can see them ALL today, yippee!) I just sent you a load of Duffus Castle but no need! Oh well.

I do trust that your groomsmen are taking good care of you....don't want to see you tied to an Elgin lamp-post after being blackened! (poss. just a Scottish tradition....and a pretty grim one at that!)

omdog Mom is laughing at her desk at work uncontrollably! omdog! this is too funny, Doofus is official now! he never even told me he had a crush on Lassie, this must have been when he was in Ohio. He sure likes those big dogs, doesn't he. I cannot believe Eric let him borrow the zoomer, I need to have a talk with that guy.

So between being a wizard and a laird Tanner is becoming quite the titled terrier.

pee s. Tanner wasnt hitting the Scotch was he?? he looks a little wonky in Eric's zoomer.

Laiwd Mac Doofus seems to fit in pawfectly..I hope he doesn't find othew Doofus ancestows to bwing to the wedding..
So glad to see Joey in such fine spiwits..I was wowwied about him eawliew in the week
can't wait fow Satuwday
smoochie kisses
ASTA

That Tanner is so silly!

Doesn't he know all his ancestors come from Boston!!

Oh my Mom is so happy that Tanner has found his Duffus Castle. (Think he'd mind showing my sometimes doofus brother around???)

And does he have a crush on collies? My beautiful Esex and her nephew, Deacon, will be at the wedding so he may have a chance to spend some time with them.

We are still laughing!!!

No argument from this part of Tennessee...

Have to agree with Mack - ancestors most surely come from Boston. But! So glad your found Duffus and its castle of rocks hehe!
Hugs xo
Sammie

It soooo is the heat!

And now Petey has gotten it my pawsmosis!

SORTA LIKE SOMEONE SAYIN' THAT I HAVE A TWO TON BUTT ON THEIR BLOGGIE...

Honestly, Petey...I'm going to marry Mango...it would serve him right...so...did you mom have to take the hips out in my dress?????

You shoulda seen the clerk at Nordies when Mumsie took back the two right feet...he looked at the shoes and said, Ma'am...one of these shoes has been worn...DA...that would have been the sample shoe...

And I thought Scruffy was dumb.....

It's not a pawty til Tanner gets there...

I hope Lassie is found.

From another carefree bachelor....

Petey. Was I out of my square old brainbox when I let MacDoofus borrow my zoomer? And where did he leave it??? And crickey! I see his Mom is after me now too. This wedding is one malarky after another.

Hmmm Tanner may have a run for the title of doofus with the Border collie here, but then again, maybe not. Sigh, I can not wait until I get to Scotland! See ya there Petey!
-Kira The BeaWootiful

Just too funny - thanks for the good laugh - Mom needed it.

Of course Tanner is right, Scotland does have a seperate language, just ask any English person visiting!
Tanner so suited being Tannerheart that we are happy to acknowledge his Scottish heritage.
As for 'doofus' this is not a word that we had ever heard of and think it is an american term - can Tanner there be a doofus in Scotland where we dont recognize the word?
Yes we are happy that he is now a Laird and he has his own Duffus Castle - this honour is rightly deserved!!
We think we are looking forward to the wedding although of course we are a little anxious!!
love
aunties Martha & Bailey xxx

Tuffy and the Dog WOods Pack

hehehe!!! that was really funny!