Better than a dog on your head!

Yesterday, while I was still sound asleep, Mom snuck out of the apartment at 5:50 am to go be a clown in the 83rd Macy's Thanksgiving Day parade! It was her 7th time marching in the parade and she said it was the best time ever!

She was a Lilypad with the Safari Clowns, right behind the Watering Can float with Mitchell Musso from Hannah Montana. If you look carefully, you could have seen her dancing around in the background while he sang! Then they had a closeup of Mom and her pals, but it was as they were going to commercial so there's a big logo over them.

Anyhow, here she is with a Frog on her head! Only appropriate that Kermit is in the background! 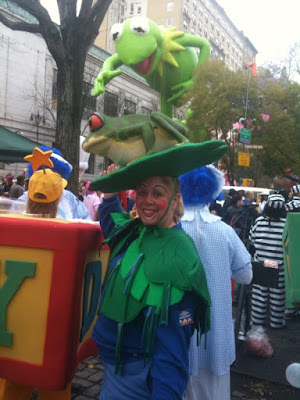 And here she is with her friend Susan, waiting for the parade to begin. 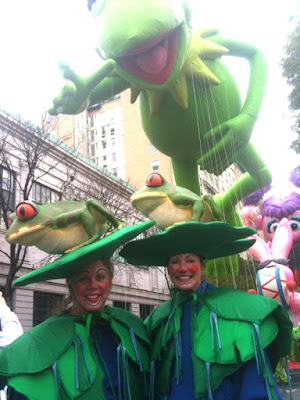 We're got loads of photos of "behind the scenes" Parade stuff that we'll post over the weekend. In the meantime, enjoy these Thanksgiving leftover!
Posted by Unknown at 1:10 PM

Won't woo be the envy of Norwood!!!

Your mom makes a good lilypad. What a fun thing to do! can't wait to see more pictures.
your pal, Morgan

Oh Good! We'll look forward to behind the scenes photos! We watched and watched for your moma! The parade was the best one EVER, knowing she was in it and that you'd get a first hand account!

Love ya
Wish we were there.
Jake and Ferg

We have heard about Macy's Thanksgiving Day Parade - now we know someone who has been in the 83rd!
We thought your mom looked very cool as a lily pad with a frog on her head.
Not everyone could carry that off!
love and kisses
Martha & Bailey xxxxx
PS our mum says she is very glad that your mom had such a good time and wishes she had been there - goodness only know what she would have wanted to dress up as!!!!

Hi Petey!
That is SO COOL that your mom got to be a clown in the parade!! Awesome pictures!
xo

Your mom and Susan look adorable in their lilypad costumes! Mom missed the parade this year! Tom Turkey had to be in the oven so she couldn't leave the kitchen! Bummer!

OMD...Petey...your mom looks pawsitively RADIANT in that pic...um...it must be cool to be green!!!

We can't wait for the behind the scenes action as described by you dear Petey...

We watched the parade to and kept wavin'...hope ur mom saw us!!!

How exciting!! We can hardly wait to see the rest of the photos.

Wowzer.. Miss Khyra sent me over since I have the biggest frog fetish. Petey... will your mom adopt me please! She is exactly what I've been waiting for my whole life..
your frog frenzied friend,
norwood

Mom looked and looked for your mom. She never saw her, now we know why! We hope your Thanksgiving was a good one. Mom says the 1st of each holidays are the hardest. So she says to give your mom a huge hug for her. We had mac and cheese. Not bad!
Hugs
Sunny,Scooter,Shaymus & Jamie

Norwood will just love those lilypad hoppers. Your Mom and her friend look great. We always watch the parade. Jake and Fergi are correct - this year's was just wonderful. And we bet your Mom being there had a lot to do with it.

I can see your Mom enjoyed it a lot!
Kisses and hugs
Lorenza

WOW, that is so cool!
I can't wait to see the other pictures! I LOVE THE PARADE!

We totally missed the parade, so we're looking forward to your photos.

I kind of like that whole outfit your mom has on. Very earth friendly.

DON'T LET NORWOOD SEE THIS! Who knows WHAT could happen!! Love A+A

Hi Petey
What an interesting looking parade. But are you not a little concerned that you Mom has taken to clowning around with a FROG on her head! And apparently enjoying herself very much. I mean, what sort of a message does that give out???
Just a little worried, here in Aberdeen.
Cheers, H.
The only frog round here is the one in my throat, from all the barking I did at those kennels last week...

Mom looks all smiley and happy, clowning around. But what's that on Mom's head, a froggie?? Now I'm confused. I always thought it was the Cat on the Hat??? Can't wait to see the outake photo's.

We are just so impressed with your Mom! She looks fantastic! What a great costume!

love and woofs
Clive and Murray

How cool!! Mom is sorta scared of frogs so luckily SHE was not the one with the frog on her head!!

Oh my dawgness, your Mama looks so adorable!! How cool to be in the parade. Is she wearing one of the bullfrogs from our ponds??? hehehehe!
Luv & Wirey Hugs,
Butchy, Angel Snickers, Ruby, Sylvester & Scuby

How cool is that?!!! I wish I had known. I would have watched that parade on the tv set and barked at your mom. I think you should have gone too, Petey. You would have made a great frog and you could have sat on your mom's head all day.