CLOWN college that is!
On Thanksgiving Day, Mom will be crawling out of bed around 5:00 am to head uptown to The New Yorker Hotel to get in costume and makeup to be one of over 800 clowns in the 83rd Macy's Thanksgiving Parade! There will be close to 3 million people in the streets along the 2 1/2 mile parade route and over 44 MILLION watching on tv.
Yesterday, she and her pal Susan (Jazz's Mommy) went to Clown College to learn some tricks on clowning around. Now this will be Susan's 4th parade and Mom's 7th, so they are pretty much PhD candidates!
Last year they were Harlequin Clowns. These were very cute costumes with great funny hats. 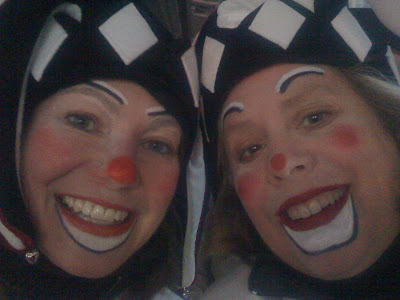 The year before, they were Safari Clowns, near the Dora the Explorer balloon. That's what they'll be again this year. The costumes aren't great - they are hoping they can be the two alligators...
(We know a thing or two about alligators.) 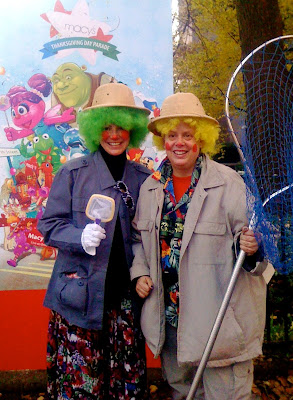 On the rainest, coldest Thanksgiving Day, they had the best Clown assignment as Confetti Clowns. They were at the very start of the parade with Al Roker and got to shoot off confetti guns as he cut the ribbon, kicking off the parade. (Mom also landed about 30 seconds of camera time, if you could recognize her!) 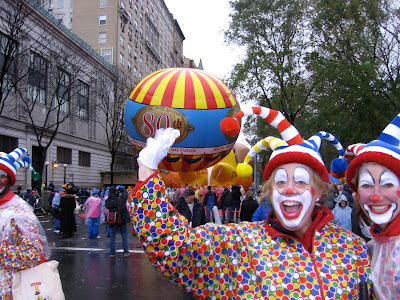 Finally, Mom's very favorite costume —as an ear of corn with the Funny Farm Clowns. She got to make all sorts of awful puns because she is so corny. 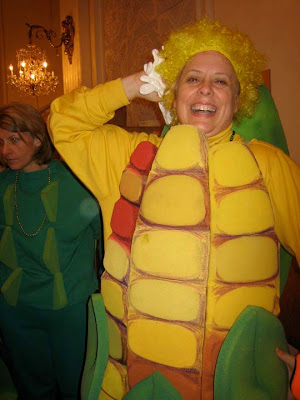 Really glad that Tanner didn't turn my Mom into a gigantic corn shank!
And what will I be doing while she's busy on Thanksgiving morning? 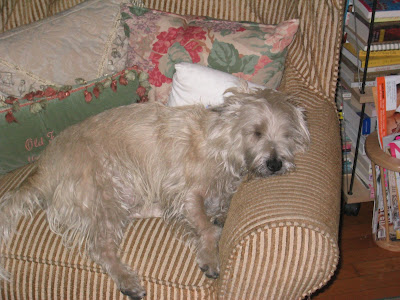 Not to mention woo will get her moan and groan about getting up at THAT hour!

That's early but looks like she really has fun. Maybe that outweighs the getting up early part.
Wags
Ernie & Sasha

What an adventerous Mommy you have!
Sally Ann

Congratulations to your Mom!
Sounds like she is going to have a pawesome clowning time!
Kisses and hugs
Lorenza

We can't wait to see the pics from this year's parade! But we don't understand why you can't be a clown too, Petey...

Petey wake up and cheer you mom like I do.
Your Mom's one of the coolest Moms on earth, bravo!
I like your Mom's very favorite costume, that's the best: an ear of corn with the Funny Farm Clowns.
Congrats on the Clown College, graduation Petey's MOM!

The not-so-little man was so excited to see your Mom Petey! He loves clowns so much.

He is desperate to go to New York - something to do with Barney Live in New York!! but we think we would have much more fun watching your Mom in the Thanksgiving Parade!

Petey: Maybe we could have a pawty at your place and watch the parade on Tee Vee? I wanna get some of those Washington Park Sqrrrls Asta is always telling us about, and ....well, New Yawk is Magic, maybe it would make Snickers feel better?

Then, we could all head to St. Loulis for Aunt Marie's 95th Barkday.

How exciting - we'll be watching for her.

You will have the best seat in the house for the big parade!!! Congrats to Mom - she looks great as a clown:)

What do you mean snoozing, Petey? Turn on the TV and watch your clownish mom! We can't wait to see pictures of this year's parade!

Wow - I've never heard of Clown College before! What a lovely human you have - full of humour and life! :-)

oh man Tanner is drooling at the size of that corn!! :) I bet she is going to have a great time!