Hooray for Clive...& something for Norwood...

Hey! Did you catch the excitement at Mangominster? Noooo, not when Lacie came in wearing a bikini made entirely of bacon strips... when my good pal Clive captured not just the Reader's Choice but the Best in Class award for Working Dogs!!! Which is awfully well deserved because Clive is dedicated to his job, he works 24/7 and never calls in sick, takes time off or stays in bed because he's having a bad hair day! 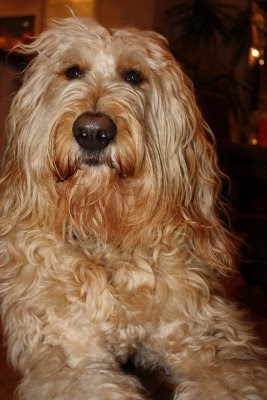 As for me, well, I'm back to Massachusetts, to look after my pal Norwood. Apparently he was SO hungry on that ice floe in the Charles that he ate ALL the hotdogs at once. That's more than that guy who always wins the contest at Coney Island each year. 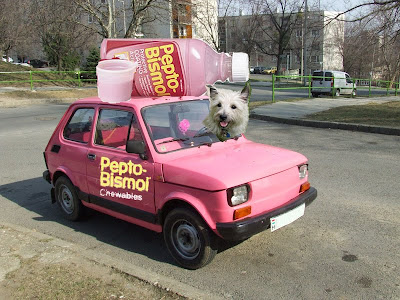 Seeing all The Boys attakhk The Beastie in her Bakhon Pasties was too much fur me!

Norwood is SO lukhky to have furiends like WOO!

We're with you on Clive winning Best in Show!

Yeah! Clive winning was brilliant. I love that he's a working dog but not above a spot of naughtiness now and then - like when he stole the Sunday lunch leg of lamb. Bet you he needed help from you pink car then too.Oh and if you need help taking the car I'm right there with you pal.

Petey
You are an amazing "friend' right? I wouldn't imagine anyone would think this is anything more. I mean.. you're petey-sweet kind well intended Petey.
norwood

Now that was funny! Poor Norwood!!

Thank you so much for that! You made the NSLM squeal with delight when he saw my photo on your blog post!

We were so honoured to win both the category and Readers Choice. The excitment here was great last night - we had to go to the cinema to try and calm the NSLM down!

Hope Norwood is feeling much better!

We've voted for you this morning - 3 times, cos we've got 3 computers here in the house!!

We were thrilled to see Clive winning!
You are a great pal Petey - you go above and beyond the call of duty for your pals.
That Pepto-Bismal stomach buggie was just so very thoughtful.
love and kisses
Your favourite aunties xxxx

you are such a good friend, I mean, to be seen in a PINK car! wow.