This could also be called the "By Request" post! First off some more photos of Petey racing around on the beach. This is the definition of pure joy, from the moment I put Petey in the backseat of the car and mention "wanna go to the beach?" As we get closer, his excitement turns into a frenzy as he can't wait to leap out of the car and race from the parking lot to the boardwalk. Once on the beach, he dances in a huge circle of happiness, engaging every person on the beach. He really couldn't care less about any other dogs there, beyond the "howdoyado?" sniff. He spots someone and heads over, dropping the ball at their feet, and more often than not, pouncing on it mischievously seconds before they can pick it up. It's his game, I can't explain it! 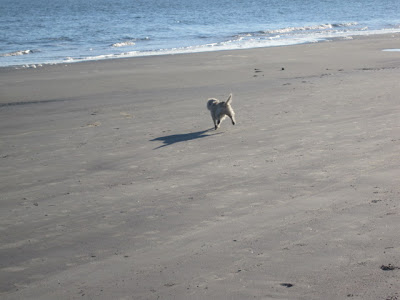 I always say that his name changes when we get to the beach to that old Southern name...Disregard (like Beauregard!) And yesterday, he absolutely lived up to it, following a man down the beach a good half mile while I whistled and yelled for him to no avail. Clearly, we were operating on Petey/Disregard time! 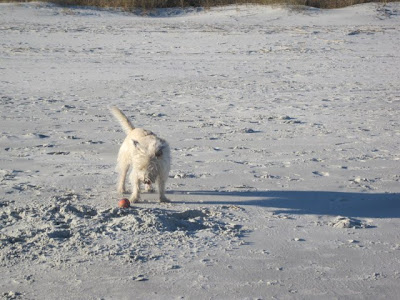 As you know, I am very involved in volunteering with Heroes on Horseback down here and this week has been busy with volunteer orientation and putting together a curriculum for ground school. Very exciting!

Murray has requested some photos of our horses and since I was unable to capture the three dolphins Petey and I watched playing off shore, I felt obligated to deliver!

First is our little pony, Blue Eyes, a great favorite of the little girls. He's a cute little fellow, who looks like a stuffed animal with his wooly winter coat. 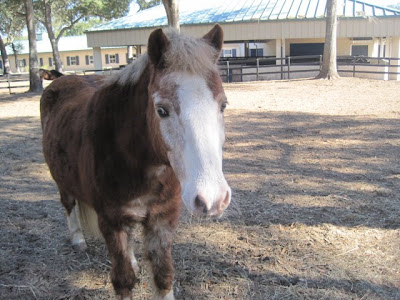 Hee! I had to include a shot of this persnickety, slightly barrel-shaped mare. She doesn't really get along well with the other horses so we have be careful to keep our distance from her when we're in the ring. And she's been known to nip, only can be put in the pasture with a few tolerant horses. And her name?

LACIE! Okay, so she actually spells it "LACEY" but still...what's up with girls with that name? 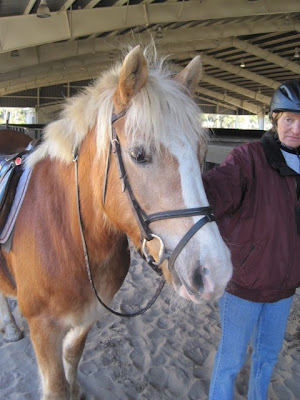 This handsome fellow is named Cisco and he's one of my favorites. He's that pony that you can call by name and he'll come trotting over to the fence. He's a love. 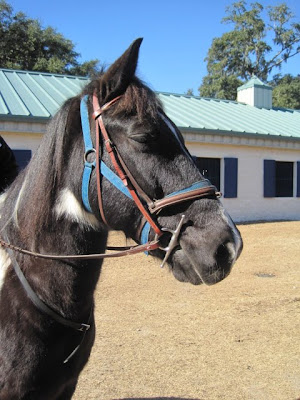 This little mare is named Little Bit and she's a sweetheart. Whenever I'm horseleading her, she'll generally head-butt me to scratch her behind the ears, under the chin. She'll follow you around like a puppy. However, as horses are herd animals, she was very unhappy to be left alone in the pasture, kept whinnying like crazy, and racing around the field when some of the other horses went off for a trail ride. She was actually cantering right up to me in this shot, veering off at the last moment. 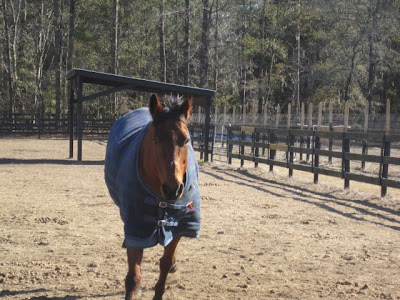 "Will someone please come play with me?" 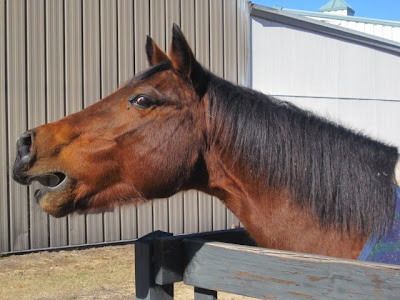 This handsome fellow is one of the newest members of our herd. His name is Crackers and he's a really sweet pony. 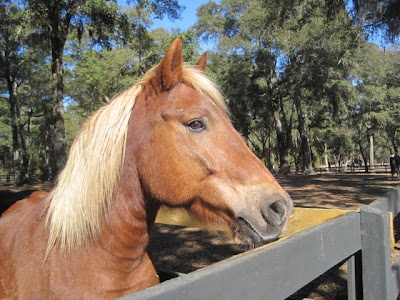 Finally we have Mister Ed, another new horse to our herd who is slowly getting used to his new surroundings. He's half Clydesdale and HUGE - he's over 17 hands for you horse people. I rode him yesterday and he's quite slow as he has to lift those big hooves and I felt as if I could see over the barn, I was so high up when I was riding him. He's like a big baby whose intimidated by the ponies, who totally boss him around! 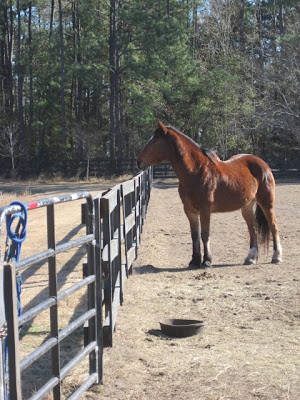 He is so sweet, a real gentle giant who just loves to be cuddled, scratched under the chin and behind the ears. After I dismounted, I felt like I could walk underneath him! 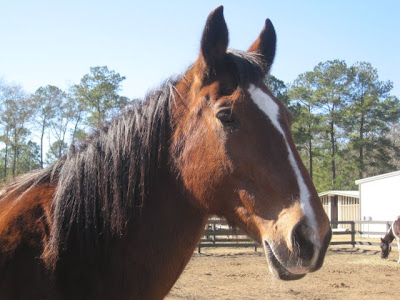 So there you go, Murray, here are many of the horses and ponies I'll be working with on Tuesday and Friday mornings for the next six weeks!
Posted by Unknown at 12:27 PM

What lovely horses! I really miss riding, sounds like Heroes on Horseback has a great herd.

You go Petey. Is that Mr. Ed the talking horse?
Benny & Lily

thank you for the beach photos. Muzzer is sooo jealous of Petey, cause she loves the beach and wants to know if there are seagulls or Pelly Canns there?

What a treat! Thank you so much! Murray was about to go to bed when we checked on our blog roll .... he was so excited looking at all the photos!

His dad was very impressed too ... a horse called Cisco - the same name as one of his new shares in Clive's 2011 portfolio!

We hope you have a great time over the next few weeks ... the horses look wonderful and we sincerely hope the kids all have a brillant time too! The very best of luck of luck with it all!

Such handsome horses. Thanks for the introductions. Looking forward to reading more about them i nthe coming weeks.
And Petey looks great on the beach, of course! (Strangely, Bertie so far does not seem to be a fan of beach walks. That unlimited space seems to disconcert him. Either that, or it's that I always seem to take him down there on windy days - after all, it is almost always windy in my part of the world - and the sand blows in his eyes).
Cheers!
Gail.

Ahem...Lacie clears her throat, but remembers what the vettie said about her blood pressure...

So, dear Petey...let me get this straight...a fat ill tempered pony named Lacey reminds you of whom?????

Actually, I think she is adorable...we even look alike, with her red fur and somewhat of a wheaten face...no, I don't have that attractive white stripe, but I wish I did. Please have your mom take her some carrots and apples when she goes to visit again.

That Mr. Ed is one handsome boy...he's hooooooooooge! How does one get on him??? Mumsie would never be able to get her leggie up that high. She'd need one of those blocks. Actually, she'd probably need a block to get on Lacey too...she's not too flexible.

We're so glad you and your mom are enjoying your SC stay...

Miss Lacie Girlie who may change her spelling to Lacey Horsie...

Those horses are so beautiful!! We love Little Bit already from reading your description of her.. how sweet.

Thanks. No more pain au raisin. We'll stick with croissant.