So my bestest buddy Eric was hobnobbing on the high street, looking for more fancy footwear at Selfridges when he ran into Mrs. Victoria Beckham —Posh Spice herself! He almost flipped his wig when she cornered him by the baby soc—errr—dog knit footwear rack and started blabbering on and on how she's heard he was good friends with me and if it wasn't too much trouble, would he be so kind as to get me to pawtograph this photo for her?
"To Posh,
Lotsa licks!
Your love pup,
Petey" 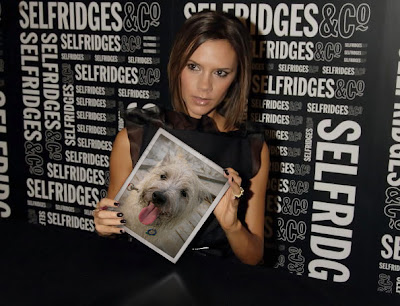 Later that evening, Eric was taking in Madonna's concert (Posh slipped him some VIP tickets to thank him for getting my pawtograph) and just before the final chorus of "Into the Groove," an usher ran up with a backstage pass, telling him that Madonna insisted he come backstage immediately after the concert.
Then she started singing, but the words didn't sound quite right:
(To the tune of "Like a Prayer")
"When I call your name, Petey my Cairn terrier,
I'm down on my knees, the ball rolled under there.
In the midnight hour, I can feel your power
As you tug the leash, to pee upon the flower."
When Eric went backstage after the concert, he was shocked that all Madge wanted to do was find out all about me.
"After she changed out of her costume and came out in this tee-shirt," said Eric, "I realized that Guy Ritchie had been barking up the wrong tree suspecting Madonna was involved with A-Rod. 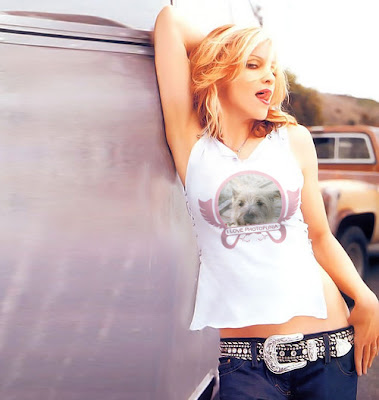 "It was more like 'A-Dog' — Petey, to be precise."
I was shocked. Shocked I tell you when Eric rang me up with this news. Who knew I'd become an international sex symbol among the 2-leggeds?
Then some friends here in the Village held another Adoption Day for the North Shore Animal Rescue. Who should show up but Angelina Jolie! (The lady can't pass up an adoption, apparently!)
When they told her it was adoptions for dogs and cats, not children she said, "I'm here for Petey. He rocks a fauxhawk even better than Maddox. Brad's changed his last name to Pittbull, but it doesn't matter—I simply must have Petey." 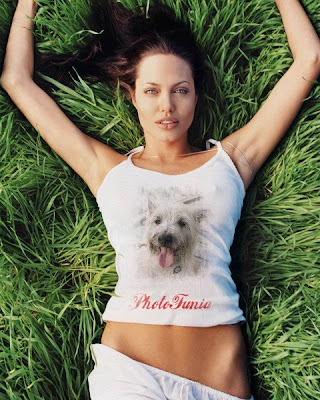 She was heartbroken when she heard I already had a home and wasn't looking to be adopted. (I sure hope she pulled her pants back up before she headed to the airport on the bus.)
Then yesterday morning, I was going out for my usual constitutional when I spotted this across the street! 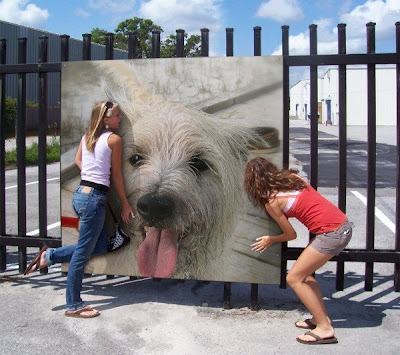 Had I become the George Clooney of canines overnight? I ran home to call Eric to tell him all about this latest turn of events, when I was stopped in my tracks in Times Square! 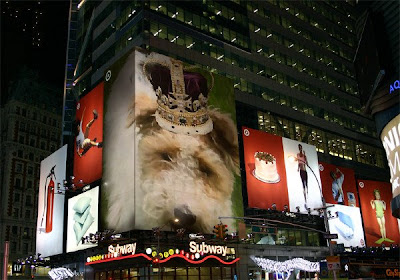 It was ERIC! The royal Square Dog taking up a whole six stories in the world's crossroads. Cars were screeching to a halt as fans ran into the streets to genuflect in front of his image!
Later that day, Giselle Bundchen made headlines when she insisted the catwalk be changed to the dogwalk as she strutted in her custom-made Eric dress... Bow wowsa! 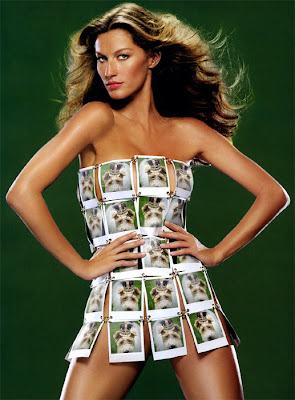 Busloads of people lined up for hours to see the latest installation at the Metropawlitan Museum of Art.  They tossed the Mona Lisa in the trash to replace it with this: 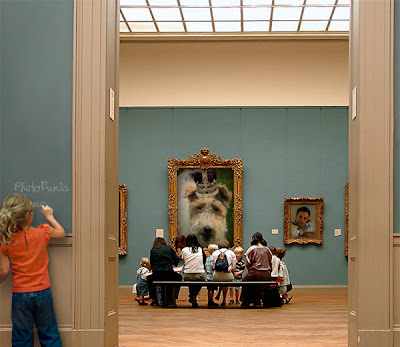 Yes, indeed. Eric has taken America by storm—far exceeding my celebrity fanbase.  I knew I was yesterday's news when I finally saw this! 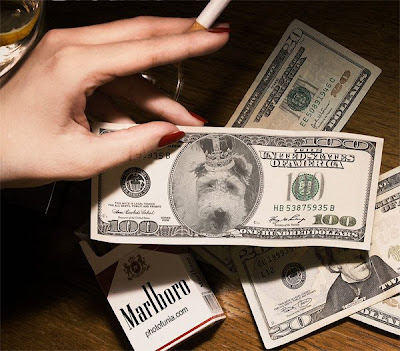 With King Eric on the currency, maybe the dollar will FINALLY catch up to the pound now! (Or will it now be called the Dog Pound?)
Posted by Unknown at 4:55 PM

Awe you still going to talk to me aftew such celebwety fame???
Oh My dog, and Ewic..........Does Toffee know???
This is all too much, I nevew knew I was knobhobbing wif the such highfalootin' guys
smoochie congwatulatowy kisses
ASTA

I say Petey.What ho? Can't comment right now old chap.Apawlogies.Important duties to pawform. Hosting Charlie boys 6oth pawty.Setting off the 41gun salute.Then onto the G20 summit to sort out the Dog Pound. (Twenty to a dollar. That should do it for you Mom?)Followed by pawsonal appearance - pawtograph signing of my new book "How to wig your wag and beg off people".Michael Ball is attending. I'll tell him you are his biggest fan.Then to Selfridges to stock up on some new dog socks. (That's my secret attraction Petey.) I'll purchase a few pairs for you too. Wouldn't want to put my best chum in the shade. Now, got to go. Mother needs picking up from the floor. Would you believe she is lying in a heap laughing herself stupid at your blog. Parents. Can't take them anywhere. Tootle Pip. Eric x

Hi, Petey!
Lucky you! All of them want to have you!
A-Dog? Haha!
Kisses and hugs
Lorenza

What a star-studded life you lead, Petey! Quite awesome!

Your Pals,
Sen-Can, Tom and Tama-Chan

Boy, you and Eric are certainly busy and very popular doggies! At least we can say that we know you both!

Crikey how did you and Eric become so famous? Must be those good looks ay!

You are one famous celebrity!!!

Hey Petey,
Hmmmmfph, what have you & Eric been doing to get so famous?? Better be careful, soon you'll try to go out on the town & all of the girl hoomans will be chasing you around & you won't get to enjoy yourself. Next they'll be taking pictures of you going potty for the tabloids! No respect, no privacy, hehehehehe!
You won't even be able to go to a secret poker pawty! That would be just awful.
Have a great weekend!
Luv & Wirey Hugs!
Butchy, Snickers, Ruby & Sylvester

This post it terrierfying...we're thinkin' somebody read Photoshop For Entirely Too Clever Westie's or we need to come to New Yourrk fastest...Mumsie is lyin' on the floor cracking up...must be somethin' she ate for lunch....we're not sure which pic we loved the best...the totally freaky thing is THEY ALL LOOK REAL.

OMD, Petey!! Wow, how cool!! You're everywhere!!! Our favorite one is a Madonna's T!

WHOA....we need pawtographs from the 2 of you!! Will we be able to say we knew them when?? Now we know why Tom Brady is healing so slowly..Giselle if hot for Eric!!!!!!!!!! PL2 is cracking up here and we don't know why!! Love and kisses A+A

Petey , you are a mégadog!
We love your blog, and we fight to be the first looking the computer's screen.
Yours
ViVi & AB

OMD...you are such a celebridog! Watch out for the puparazzi!!

How do you dogs do it? All those hot ladies and all that fame?? I am so jealous! I need to take some classes from you guys!!

Haha, I knew it! You ARE the most famous dog I have ever known!!
Love Clover xo

Fame at last! Don't forget me will you?

Dear Petey, We are 2 Maltese dogs and this is a truly amazing and outstanding story, and we are very impressed that you were not completely freaked out when you saw your head looking super enormous, because we probably would have passed out. Two Paws Up! Love, Your PaLs, LuLU and LoLLy! http://www.luluandlolly.com