Update on the Poker game....

So I swung by Lacie, Scruffy and BabyStan's place to drop off some grub. And decided to sit in on a few hands of BlackLab Jack. Well, all I can say is it's a good thing that my Bark Obama tee was at home because very quickly I was losing my shirt!

Then I took a better look at the poker chips.... 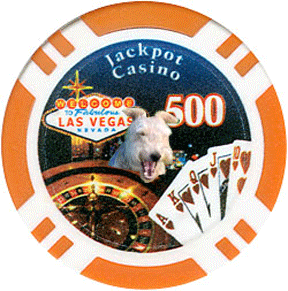 Hmmm, that doesn't seem quite right. Is Lacie skimming some profits off the house? (Well, it is HER house after all.)
Then I looked more carefully at the cards... hey wait a darn minute - that's BABY STAN!

And of course Scruffy would be the King of Hearts (although I don't know about that sword through his head? Maybe he had an itchy ear...)

Of course the biggest flirt on the entire Blogosphere was the Queen of Hearts (or should that be broken hearts? Although checking the empty wallets of the other players, maybe it's just BROKE hearts!)
I called the Card Girl over and asked for a fresh pack!

Hey! It's Asta! And she'd been reduced to wearing a just a playing card after an unsuccessful round (well, it depends on who you ask about it...) of Strip Poker. Hope Stanley doesn't hear about that... Tanner, you may want to wait awhile before you start wearing Asta's clothes...just a suggestion.
So who WAS the big winner? The cool cat behind the mountain of Lacie-embossed chips? None other than that Italian  hep cat, Opus, Lacie's most recent victi—err—boyfriend. Coincidence?

I think not. Something smells fishy about this poker party and it ain't Opus's mackerel kibble!
I'm just saying!
Posted by Unknown at 3:16 PM

well! I certainly had my suspicions. Even muzzer doesn't lose as consistently as most of us doggies were losing this weekend. We might want a rematch when Joe Stains is available to play. He is usually the big winner!


thank you for the excellent detective work

We had our suspicions too. Just as we were winning, suddenly everydog (and cat) were sent home.

That was a wild game. Poor Asta. Lost her shirt. Where can I get a deck like that? I bet I can beat Arrow out of some treats.

Hmmm, verrrry impressive detective work Petey (are you a relative of that other Peter,the one that was in Columbo?) And considerable photographic evidence. Extremely clever of you. Fishy indeed.Cool cat that Opus.

So it was rigged all along! We should have known! We NEED a deck of cards like that! Can you point us in the right direction, Petey?!

Maybe I am just a lucky cat? Thank goodness for nine live, right?

I smell cheating going on...

I must say..I wathew like that new outfit..it's mowe stylish than a stoopid shiwt anyway, and it was sooo much fun..I didn't cawe in the least...plus having no clothes is always a gweat excoose fow buying new ones, hehehe
smoochie kisses
ASTA