After our intoxicating evening last night, we were slow to wake up this morning. We're now officially in the Highlands and so we went out to the Observation Deck to drink in the gorgeous scenery. Eric decided to wear his crown, to see if his royal subjects extended to Scotland.

Auntie Martha pointed out that a sign at the train station — we were now near Bassetmoral, the official residence of the ancient Royal Basset Family.

Suddenly we realized that Auntie Bailey was no longer with us. "Oh no," said Auntie Martha, "I was afraid this might happen..." 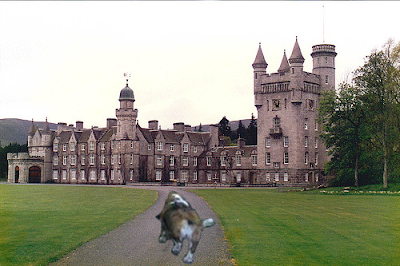 "As you know, both Bailey and I were adopted when we were young pups. We don't know anything about our birth parents, and that's fine with me,"said Martha.

"Bailey, on the other hand, believes that she is related to the Royal Basset family, as she bears a strong resemblance to the 18th Century Dowager Queen. I was always afraid that if she got close to Bassetmoral, she might try to find some answers."

"Plus, she's always had the hots for Corgis."
Eric discovered she'd been seen heading off into the Cairngorms for some stag stalking.
(Cairngorms? I'm a Cairn Terrier and I've never had a Gorm. I have a whole mountain range named after me? Maybe I'm Scottish royalty too!) 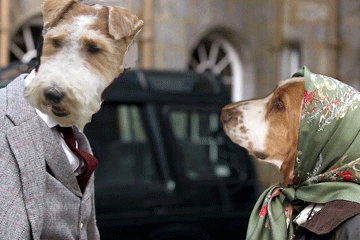 Auntie Martha headed up the mountains along with some young cousins of Marvin's. 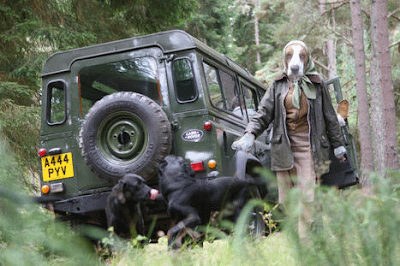 In fact, Marvin and Petey had decided to do some stalking of their own! 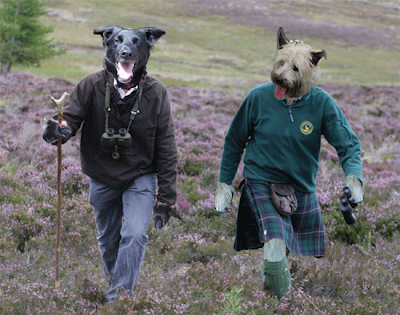 Sure enough, there was Auntie Bailey, busy stalking a majestic Highland stag, with Jake and Eric rounding out the hunting party. 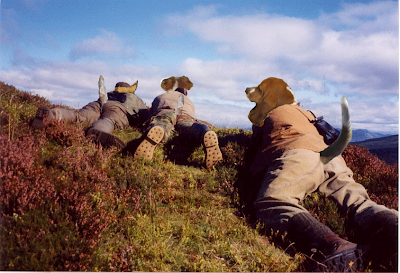 "Did someone say 'STAG?'" said Lacie, spewing heron feathers out of the corner of her mouth, "Did I hear 'STAG' and 'PARTY' in the same sentence.....without the name 'LACIE'?!?!" 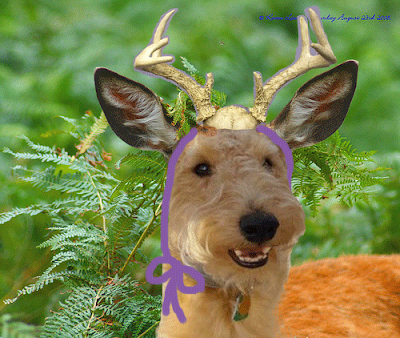 We picked up our binoculars and all at the same time exclaimed, "Oh, Deer!" 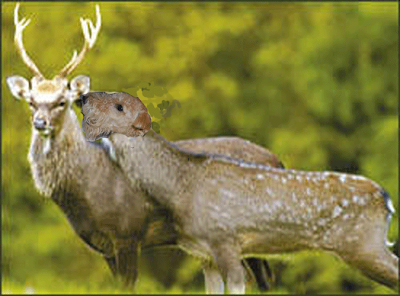 We made like a deer and high-tailed it back to the Royal Scotsman just before it pulled out of the station.
We joined our wise sage Hamish in the Dining Car for a nice cuppa and some Scottish Shortbread.

As we looked out the window on the dramatic Scottish coastline, we couldn't help but notice a lifeboat moving away from a beautiful cruise ship...

...They seemed to be keeping up with our train and headed right our way...

...Jake picked up a pair of binoculars for a closer look. "Look! One of those passengers seems kind of familiar...in fact, she looks quite beawooootiful!"

"Hey wait a minute!" said Petey, "I think I recognize another passenger as well!" 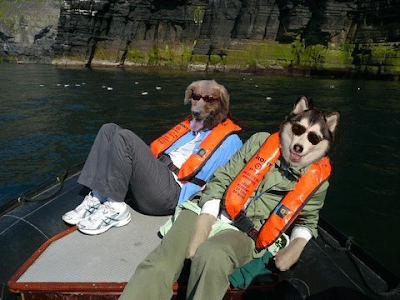 Sure enough, it was Kira and Mason Dixie!!! "When we heard about the big surprise birthday party for the Dughallmor Beagle gals, we had to come along to surprise our boyfriends Alfie and Snoop!"

Thank Dogness! Eric Square Dog just happened to have his semaphore flags handy so he signaled to the ship that Kira and Mason Dixie were alright and would be continuing their journey with us on the train.

We let our sea-faring friends check into their cabins while we all relaxed in the Lounge Car.
Jake checked out summer swimwear trends (he'd never been so far from his sunny Florida coast) whilst Eric read the latest issue of WIRED.
Marvin listed to some Three Dog Night on his iPup. Auntie Martha was quickly finishing up a knitting project for Rosie's birthday. (Why do I think this is Auntie's idea of a sexy nightie?)
I was making a nice cuppa for a tuckered out HRH Princess Auntie Bailey (this is how she wished to be addressed once we left Bassetmoral) when suddenly Hamish barked out.. 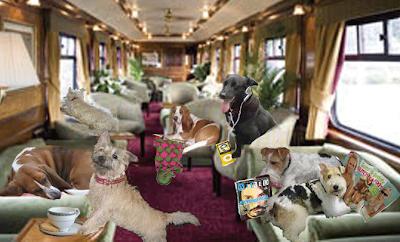 "Hey look out the window!" There on the road parallel to the train tracks were none other than Clive and Asta! Once Asta knew her new nephew was home safe and sound, she quickly booked an AireRuby ticket to join us for the surprise party. Clive, ever happy to assist, popped over from Ireland to drive her to the party!
"We'll meet you at Dughallmor!" we shouted to them from the train. 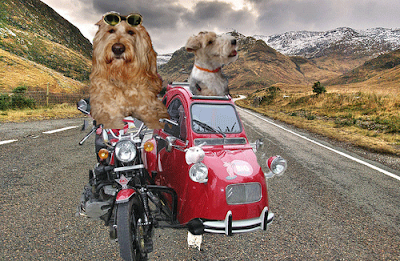 And a few hours later, our party express train pulled into Elgin Station, loaded with presents, flowers, cake, and decorations galore!!! I hope Rosie and Gabbi (and Snoop and Alfie!) will be surprised and delighted to see us!!!

Oh thank you ever so much for seeing us out there on the lake, we were sure we were going to miss you. thank dogness we did not. Alfie will be so surprised!!!

Really cool train you were on there! And the sights! What a trip!
And royalty, too! What more could you ask for?!?

I am enjoying reading your travel log! I always thought Martha and Bailey looked very royal.

What an amazing trip. Scotland looks really cool? Did you meet a lot of scotties?

- and Asta was great company. Nothing like the open road and the wind in our fur!

Can't wait to get to the party!!

The beast is shameless, eh?

Ahh Bonnie Scotland. What a great adventure you all had.

This is like a doggy soap opera. I don't know what that is exactly, but my mom said it, so it must be true. BOL We can't wait for the next episode!

Petey,
I'm evew so gwateful to Clive fow picking me up and that wondewful wide in the fwesh aiw..the fwagwance and bweeze in my haiw was faboolous, and I'm thwilled that I got thewe in time to join all of you fow the celebwation..I always knew auntie Bailey, ummm, I mean HRH auntie Bailey had something tewwibly woayl about hew. I hope Lacie can get away fwom hew stag and join us at the pawty.
This is twemendous fun
smoochie kisses
ASTA

Wow.....you guys are having such a blast on the journey up....can't wait to see you all, we're so excited!
Shhh....we won't tell Alfie and Snoop their sweethearts are on the way too, it will be a lovely surprise :D
And how very cool that our dear friends Asta and Clive will be joining us too.....we've really been missing everyone so it's gonna be great catching up.
Gabbi just wrote on Jakey's blog that she hopes he's wearing his tick treatment for when they go rolling in the heather....looks like we'll be needing a boatload of it with all the romance in the air!
Lacie is a picture of doe-eyed innocence, I hope she doesn't cause a scene....
And the Aunties are resplendent in their headgear, very Elizabeth II!
So....as their nieces and nephews does that make us all blue-blooded too??
We've loved reading about your hilarious antics on the way 'up the road' but umm.....are you nearly here yet?? The red blankie has been freshly laundered in preparation and i'm saving a juicy bone to share with you....and my favourite tennis ball :o)
Love you lots....hurry, hurry!
Your lovin wife, Rosie-Posie xxxx

Wooo! Thanks for spotting us, I know I can swim well, but was not so sure of Mason Dixie. We are really looking forward to what is next in store, and won't my Snoop be surprised! Too bad I missed the Lacey dressed as a stag, what a hoot!
-Kira The BeaWootiful

woooooo...what a wonderful trip. How are you guys getting back to Paddington? The Orient Express?

It is a bit nippy here -- glad we had those little nips to tide us over.

But how cool that we will be an eightsome with all our sweethearts as well as so many of our pals to celebrate this beagle birthday season!!!

Is it Eric who knows how to play the bagpipes -- or perhaps Hamish? I think our song will be so much more romantic with bagpipe accompaniment.

Pee Ess, Gabbi, I never go anywhere without my Frontline, so don't worry!!! What about you??

This was great!!! Thanks!

What a great party it is turning out to be!!! Enjoy!!

Thank dog ya didn't shoot me on your stoopid hunting pawty...I mean a studly stag??? What do ya expect, Petey??? I did look totally adorable in the deer outfit, didn't I??? Especially the purple...such a royal color too!!!

Sorry it's taken me S O L O N G to show up here...(Lacie yawns and stretches still clothed in a frilly purple negligee...) I had a horrid time getting that heron stench outta my fur, not to mention the feathers out from between my toofers...yeesch!!

Honestly, that under the covers work was quite difficult...OH...and Joe Stains was under the covers with me and I thought he was a bird and well I um sorta kissed him and now I'm afraid that Sophie is gonna kill me...shesseesch...dangerous work, this spyin', Petey!!!

Gotta go read the rest of the story....

Petey
Every time we look at Martha in the headscarf we start laughing all over again.
We think she even surpasses Helen Mirren in the role of Queen!
That really was a very funny post - loved the inside of the train with Hamish making the tea and shortbread! Marvin on his ipup etc.
The sight of Clive and Asta on the motorbike!!!!
Thanks for the laugh!!!
xxxx

omdog looks like you have a major deer problem. I could send Tanner over to slay her if you want. I mean, he thinks he can slay deer anyway, but he sure never has seen one like that beast. (he hasnt really seen one at all except in his vivid imagination)

anywho, looks like you all are having fun and meeting up with a lot of our pals.

What a trip,I'm really wired.Fancy us finding your mountains Petey.I'd have never believed it that all this time you've been gormless!! And HRH Princess Bailey.Did she bag a corgi for herself?

Thank dog I had my flags to sort out the cruiser. Wagging to have e Clive,Asta,Kira and Mason Dixie! Can't wait to see the girlies Petey.Should be a high old time.Like the trip up here. Great job organising it all pal. Paws up.

You have the best adventures...

I know Rosie will be sooo happy with her surprise pawty...

Obviously Scotland is where the action is at!
Looks like you had loads of fun!
xo