Guess what? My darling wife Rosie is celebrating her 2nd birthday this Thursday. (I know, I know, a lady never tells her age!) And since Gabbi's birthday is just 9 days later, Jake and I decided to go pop over the big pee and surprise the two girls with a birthday party! 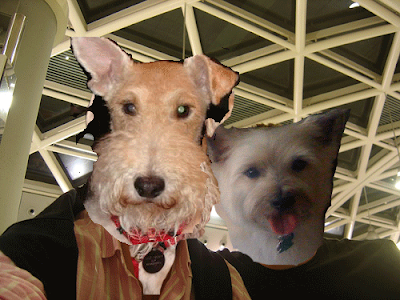 Naturally, we flew on AireRuby. Is there any other way to fly? We settled right in - Jake slipped on his new headset that cancels out all the high-pitched sounds that may make you howl uncontrollably on the plane. 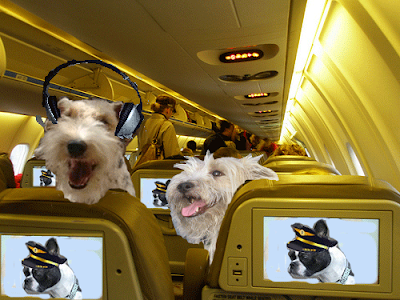 When we arrived at Heathrow, my bestest pal Eric Square Dog was there to pick us up in his red Zoomer. Do you like his personalized license plate? 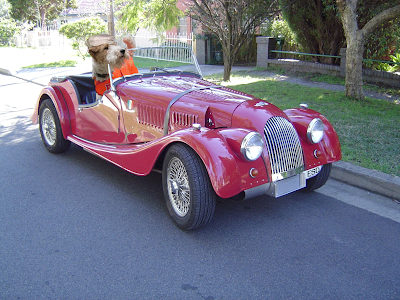 We headed off to the train station to catch the train to Scotland. Once there, we'd board the ultra luxe Royal Scotsman and pick up our pals along the way. Eric and I got into the spirit of things with my tam and his kilt. While Jakie went ahead and bought a bouquet of birthday balloons. 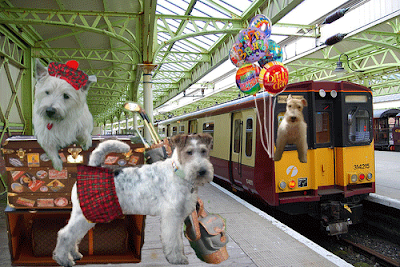 We switched to The Royal Scotsman in Edinburgh. There was a piper playing an authentic set of Laciepipes to welcome us aboard. Eric was so excited, he broke out into a Highland jig! 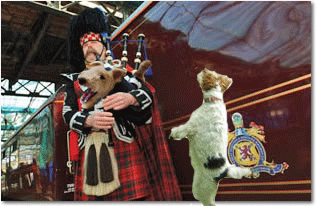 Our first stop was at St. Andrews to hit the links. Balls, deep holes filled with sand, lakes, sticks - sounds like the perfect sport for a group of terriers! Hamish Westie joined us to round out our foursome. Aren't we a handsome group on the famous bridge at the Old Course? 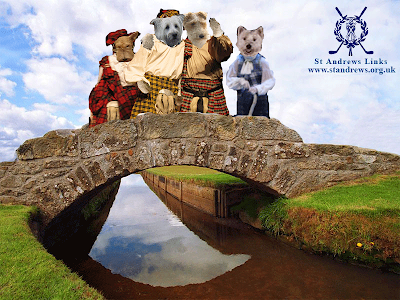 Being a New Yorker, I chose a black cap and sweater to wear with my white plus fours. Snazzy socks, huh? 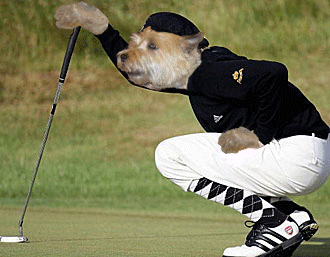 Hamish also chose a classic look, wearing his family tartan. He came in under par, obviously being a Scots doggie in Scotland has its advantages when it comes to knowing your way around the course! 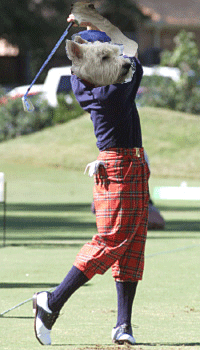 Jake wasn't so sure about the plus fours...until he sank his 25-foot putt. Which would have been terrific had his earthdog instincts not kicked in. He ended up tunneling from the hole to the tee of the next hole!

Eric decided to forgo traditional plus fours to sartorially show off his national pride!

Back aboard the Royal Scotsman! Next stop: to pick up Aunties Martha and Bailey Basset.
A classic beauty, Martha evoked images of days gone by when travel by train was exotic and glamourous.... 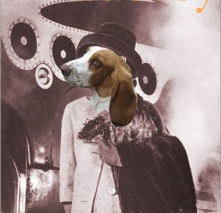 While Auntie Bailey lost no time retiring to her room to relax in her favorite peignoir with a good book. 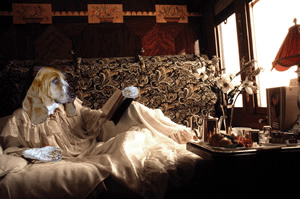 As the train pulls out into the dark night, we eagerly await our next Highland Fling adventures...
Posted by Unknown at 7:45 PM

Petey, the way you treat a lady makes me wanted to be born as a girl, your girlfriend, to be exact!
Happy 2nd Barkday Rosie!

What a lovely surprise....we can't wait to see you! Love all the golfing outfits....us girlies are sitting here giggling (we snuck into the library, having dragged Rosie away from the first day of Wimbledon coverage....she is mesmerised, heehee) the plus fours have us weak at the knees, you gentlemen are so handsome....and Eric and Hamish....WOW!!
You boys are the best,
Love ya loads....your giggling girlies Rosie & Gabbi xxxx

Great showing on the golf course. You didn't ride around in a cart and make Lacie carry your bags? Shame.

Sorry about Rosie and her pups. You are right, just wasn't meant to be. I hope she is feeling OK.

Hrmmph, I came by to leave some sugar on your Cbox but still can't see it, grrrr....

oh I am sorry, have I missed you all? I have been on my bed of pain, and my Editor In Chief has had other things to do.........such as actually going to St Andrews yesterday! She wished she had seen you guys there!!

Wishing Gabbi and Rosie Happy Barkdays, I will raise my paw wrapped around a dram, to them both.

I await your landing in my back garden.

If you need directions to my little abode, please let me know!

Although the Beagles know the way as they visited me a few weeks back!

Woo boys surely know how to use your stikhks!

I'm glad woo had a blast visiting your girrrrrls!

Muzzer and Dad did the Royal Scotsman one year and she won't shut up about it, even now! But we know you are having a fine and relaxing trip. Kisses to all from us here in Mayemphis.

What a pal you are!!!! I can't wait until we get to see our girls -- but in the meantime I've been having such a swell time putting all that training I've had on the home golf course to use -- running up and down in the sand traps, pooping in the rough (never on the fairway!!), and accumulating a ton of golf balls for my Dogdad.

Yep, you are a great pal!!!! And meeting Eric, a very cool square dog, is a treat!!! Not to mention the Basset Sisters!1

The next few days will be a ball.

Jake of Florida (and hopefully an honorary Scotsman)

Oh, Petey, you girl is going to be so surprised and thrilled to see you - can't wait to hear all about the party. Looks like things are going quite well so far.

Wooo, now that's quite an adventure ... towards a birthday surprise!

Tuffy and the Dog Woods Pack

What a terrific birthday surprise! Golf is not my game, but you all make it look fun.

Ah Petey, there are times when Martha and I look at you handsome young dogs in your plus fours and we wonder if we made the right decision to be maiden aunties!
You are all so handsome - and that car of Eric's - my goodness we felt that we should pop on our headscarves and hop in.
Then again we remember Isodora Duncan (we think!) whose headscarf got caught under the wheels!
We are just so excited to be travelling up north for our dear nieces birthdays.
What a surprise it will be.
love and kisses
Auntie Bailey xxxx

Hee hee you all look so stylish and Ewric's car??WHOA....Love and kisses A+A

I always love flying your boys around!!!

I await your next adventure with great anticipation - you know how to get around!

What a wonderful surprise this will be! You doggies are such stylish dressers! We can't wait to hear more of this fun birthday adventure!

Petey, great thought!!The girlies will love their barkday suprise.Toffee will love HER suprise when she sees me back in my kiltie and when I was flinging my highlands. But those Lacie pipes - sheese just a bag of old wind aren't they?

And how wagging to meet the Aunties again. Almost like being in an Agatha Christy movie they way those two dress and sniff things out.

Now Petey. I'm thinking the way you and I are playing we could get us each a birdie or two. Hamish is doing a grand job of keeping scores even with Jake being under ground for most of the time. But lets make sure we play a good long time at the 19th hole too.

We are so jealous, all of us. Our grandpa played at Saint Andrews and so wants to go back. Our Dad just wants to drink some Scotch. LOL

I just want to hang out with all my good dog pals.