I flipped my lid! 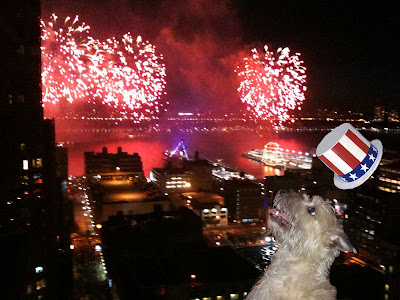 Hooray for Macy's and the Fireworks Spectacular! Mommy ended up at a party in an apartment on the 36th floor, directly across from the fireworks on the Hudson. That's one of her photos and she took about a squillion more plus some movies that she'll post later on. They were awesome - even more so at eye-level!
Hope everyone had a calm, peaceful, food-filled Fourth of July!
Posted by Unknown at 12:40 AM

Mom has two F-works vids on my blog...

I did get some PizzaBones!!!

I hope the fireworks did not scare you, we dont like them. They look great though, glad you had a good 4th.

The fireworks pictures are great, Petey - nice and quiet - just the way we like them!

Fireworks!! We love them - especially the little man and amazingly even me!! Can't wait to see some more photos and video-clips!

We got those new Chewnola thingies. Pretty good. I ate mine under the bed. Teka is in trouble because she ate hers IN the bed UNDER the covers and left crumbs.

Alll in allll a fine day

Happy 4th of July to you guys!

oh and Petey, I loved the pic of you in a Tu Tu, I wrote a poem on Eric's blog, but I am worried about you with your ballet clothes on........

Here is my poem I wrote on Eric's dearest Petey, and thank you for making me and my J laff out loud today! The picture of you in the ballet gear was the bestest fun!

"Dear Eric oh how much I enjoyed the story of your drive,

The amazing speed, the smells and the cool Ladies inside!

Can you put in a good bark for me with Martha?
I think her and I as a couple may suit.

Her ears are luxuriously Basset,
although Bailey, if Royal, is still cute.

The sight of dear Petey in a tutu
was very funny but scary,
Is he still called Petey,or has his name changed to Mary?

But the best bit of all of your wonderful trip,
Was the pub, and the thought of the gin I might sip!"

Hi Petey
We loved your picture with your hat going flip!
We will look forward to the videos - we prefer pictures and videos of fireworks to the real thing.
We were trying to imagine how high 36 floors were!
Our mum visits people when she is at work in high rise but she thinks they only go up to 20 floors although she will check next time she goes!!
That must have been an awesome sight watching fireworks across the Hudson River whilst standing on top of the world!
We hope your mom had a nice glass of something bubbly in her hand at the time!
By the way we are so worried about Martha - do you know where she is!
We had no idea she was off with Just Harry trying on kilts!!!!
love and kisses
HRH Auntie Princess Bailey missing Just Martha! xxxxxxxxxxxx

Very pretty! You Mum must be very good at working the camera thingy to get an amazing piccure like that!

What an impressive fellow you are Petey. Not only braving the fireworks but managing fancy tricks with your snazzy hat, and posing for a photograph.
I would have been hiding under the bed!
Cheers, H

Petey comes to Paris ; on July 14th it should be special fireworks for the 120th birthday of "la Grande Dame" , the Eiffel's Tower.
Cannot wait to see more pictures of the fireworks on the Huston looks fabulous.

Happy Fourth to you too.
I had wally melly and grilled chicken and beef, what did you have?
Oh your hat was about gone with the wind, Petey!

Mine really wasn't so bad! I did a lot better than last year. Glad your Mom got such a great view!!

Thanks for adding more pics and videos!
There all so amazing tell your mommy I said she is a great photographer! I love the fireworks,the giant poodle,the sunset and I must say I adored the pic of the beautiful sky or as you described it like finger prints in the sky! Your right Ive never in all my life seen anything like it,its amazing!
Lots of sloppy licks your dear pal,Penny!=]
XxXxXxXxXxXxXxXxXxXxXxX=]

Glad you had a pawesome 4th of July, Petey!
Kisses and hugs
Lorenza

Petey
Those awe twooly impwessive pictoowes..Mommi was so happy that she didn't have to even leave the woom to see those fiwe woks..that lawge poodle kind of cweeps me out.
smoochie kisses
ASTA