Two Andys and back to the US of A

Well, reluctantly Jake and I bid farewell to our lovely Dughallmor ladies. It was quite romantic and emotional, so you'll understand if there are no photos posted...
Eric Square Dog, back from squiring the Auntie Bassets around the countryside (don't miss Eric's blog!), revved up the Zoomer once again to drive Jakie and I to the airport, with one detour along the way....
...to Wimbledon!
We got courtside seats for the Semi-Finals between American Andy Roddick and Britain's (Scotland's, actually) Andy Murray.
Then we faced our dilemma...you see, Jake and I are American dogs and Eric has a girlfriend, Toffee, who lives in the very American city of Boston.
So for the first game, we cheered for American Andy... 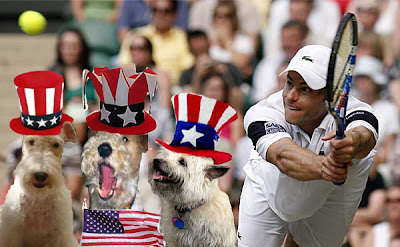 ...but then we felt guilty because Jake's girlfriend Gabbi and my wee wifey Rosie are both Scottish lassies. Plus Eric's a British boy through and through. And we terriers have our Scottish ancestors. So the next game, we cheered for British/Scottish Andy. 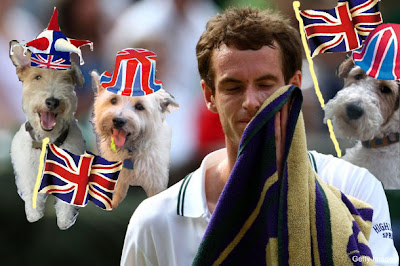 It was like the Revolutionary War all over again! And the day before America's Independence Day! We raced around the court, switching hats and flags throughout the whole match. And at the end...
ANDY WON!
I was so dizzy I didn't even remember to look for those Stanley-size ginormous Wimbledon tennis balls. 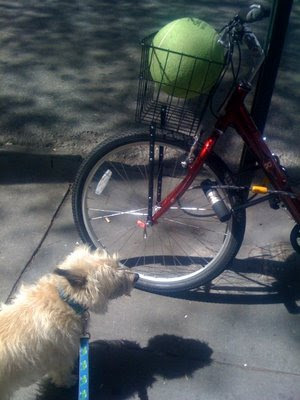 We were getting close to our AireRuby departure from Heathrow, so Eric kindly said he'd see us to our gate.
We just didn't think he meant in the Zoomer! Here we are, grabbing our tickets and dashing off for our flight, whilst Eric refuels the Zoomer with some Highland Park whiskey - a tip from Sir Hamish for a smmoooootttthhhh ride! 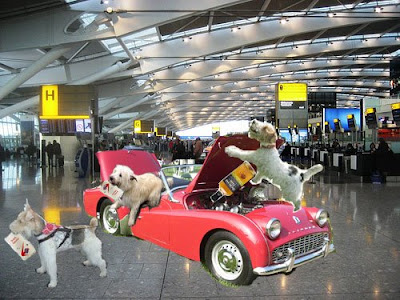 So farewell lovely Scots lassies and our dear friends we picked up along the way to the Highlands! We miss you already. But not to worry, we still have a big SUMMER WEDDING for me and Rosie to plan.
Happy July 4th to our American friends. Happy Saturday to all the rest of you!
POSTSCRIPT:
There have been some inquiries from Florida as to the whereabouts of Just Harry, now that Jake and I are safely aboard AireRuby, circumnavigating the globe to avoid fireworks.
Well, it seems there could be another romance in the mix...with HRH Auntie Bailey's self-determined rise to royalty, it seems Auntie Martha has adopted the prefix "Just" for herself. And over a wee sherry, Just Harry and Just Martha appeared to be doing "just" a bit of canoodling. Later that afternoon, they nipped out for a bit of shopping because Just Auntie Martha declared those "Harry" legs are JUST "too gorgeous to cover up with trousers." 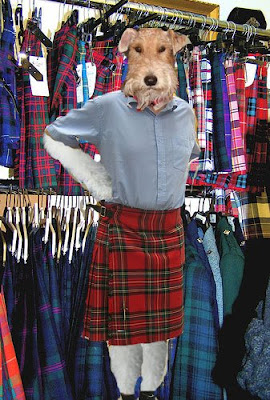 I'm sure we'll hear back from Just Harry soon. In the meantime, he's well on his way to be kitted out for Rosie and my wedding this summer!
Posted by Unknown at 12:15 AM

And Two Williams too!

Happy Birfday to US!

Happy 4th of July to you! We enjoyed seeing you at Wimbledon where you supported Scotland, Britain and the USA.
That just sums up dog bloggers - dogs without barriers!
We share across cultures and across countries - the one thing we have in common is that we are dogs.
Being dogs we know what is important - friendship. We stick together and support each other regardless.
We are glad you enjoyed your trip in the zoomer.
We now have the crown - yes not the throne - in for repair as it did get a fair bashing with Eric's driving!
Thanks for that tip also Petey about the t..'s - one's brain does begin to deteriorate with age you know.
love you lots
Aunties Martha & Bailey xxxx

Happy 4th of July sweetie....can't wait for our big day....will you wear a kilt? Aaarrroooo!

Wow, that was some match yesterday wasn't it? After seeing you guys onto your journey we settled down with some ice-cream to watch it, nailbiting stuff!
We're watching the all-American ladies' final this afternoon and can't wait for tomorrow when we'll cheer Andy on.
Mum has sent you some photos but says don't worry about blogging them for us....you have enough to do with your own blog!

See you soon my dearest....
Smooches, your wee wifey xxxx

I think you were wise to get out of the UK before Independence Day. Some of those Brits can get a bit testy over having lost the colonies.

Happy 4th July! We could get into a serious debate here about whether it's a day that us Brits should celebrate too (getting rid of all those troublesome colonies), but the weather's too hot, I haven't the energy, and I'm disappointed that 'our' Andy lost yesterday!
Cheers, H.

We enjoyed your trip a lot, particularly the train trip. Glad you got to see the Wimbledon thingy. Hope you had a safe flight home. Looking forward to the wedding, and all that.

NOW!!!OK...you must go directly to Asta's house and tell her PHOOEY...she must not stop blogging.

Thank you for such a pawsome trip!!!! It was so bittersweet saying good bye to our sweeties

happy 4th of July to you too!

Mum gotted all grump cos she had to go to work halfway through. Glad you all enjoyed the tennis and very good of you all to cheer them both on!
I a Scottish dog by ancestry too! Though I was born in Wales, there no one in tennis from there though.

Happy July 4th Petey! I sure wish I could chase a tennis ball with you today.

Happy 4th of July!!! You need to get over to Asta's house and kick her butt because she said she is not blogging anymore and that is NOT acceptable!!!! Anyway, looks like you had quite a time across the pond.

Oh Petey, If only I could have been at the dog run with you. I have to get back there! And what's this ridiculous business about Asta not blogging anymore? Buck up, I say!

ps - the little man had been following the tennis and was thrilled at Andy Murray - similar name and all that!! He was so upset when he was beaten - he so wanted a 'Murray' to win!! We'll still trying to explain it all!!