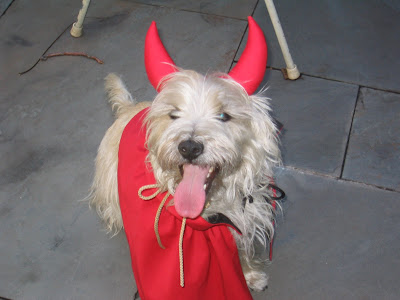 Now, Petey has been a devilish dog in the past. Sometimes literally, and sometimes figurately (like when he decided as a puppy that the only pair of shoes he wanted to chew on were my pink alligator pumps, purchased at the Barneys Warehouse at a significant discount from their original price of $1,350. I know. But how many times do you run into a pink alligator?).

However, last Thursday while walking home from the run with our neighbor and her dog Kali (since Rosie has disappeared from blogland, Kali is Petey's real-life girlfriend. She's a sweet black and white beagle-terrier mix with an alluring beagle bay.) we stopped by a neighborhood store where Petey knows he can always count on getting a dog treat or two or three. I looked down and my sweet boy looked like this: 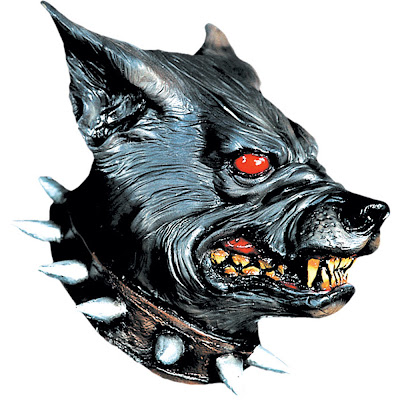 Okay, I exaggerate. Just his left eye looked like that. Like he was possessed by a demon. He wasn't in any pain and his vision didn't seem impaired, but it looked just awful and glowing red so off we went to the emergency vet.

Several tests later, we ruled out rat poisoning, internal bleeding, cornea scratches, blood infections (can you just hear the cash register ringing up this total?) and it was decided that he had a burst blood vessel behind his eye. So, home we trotted with pain pills (as much to keep him quiet as for pain relief) and gooey ointment to squish into his eye three times a day. He's on to me and when he sees me coming with anything in my hand, he scampers away, tail between his legs. The blood started pooling at the bottom of his eye almost immediately and is s-l-o-w-l-y looking better but it still looks quite red when he's outside in the sunshine.

But here's the worst part. No dog run until it clears up. And the weather? Perfect breezy sunshine in the upper 70's. More late September than August. Oh well, we've got a hurricane headed our way this weekend so he won't miss out too much. (Earthquake, hurricane - what's next? A plague of frogs?)

Guess it's as good an excuse as any to let the little mite have some ice cream at the Cafe Cluny ice cream cart...

Yes, Petey...I'm barkin' at ya...oh, your poor eye...and your mom's poor wallet...you coulda just told her it didn't hurt or anything...can you see me??? How many paws? Hmm...a bit of one of my blenders of fix-your-eye smoothies could worsen that vision...

Is your flat self going with your mom over the big pee? I insist. I'm just sayin'....

Oh...Mumsie had another squirrel adventure today...we just posted about it...

Hey Petey, so great to hear from you, it's been a long time. Not so great news about your eye of course, I bet your Mom was really scared (Gail would have been).

I do hope we get to hear more about your new girlfriend when you are out and about again.

We hope your eye feels better soon, Petey! This definitely calls for LOTS of ice cream!

That sounds nasty. Hope you are feeling better soon. I assume they checked for glaucoma? Just saying because I had a dog that had similar sudden onset of a swollen eye and the ^&%* vet did not check for glaucoma and within 2 days the little one had gone blind and was in a lot of pain. Not trying to scare you. Hopefully Petey will feel better once the ointment starts working.

Poor Petey: We hope your eye feels better soon. And muzzer says she is expecting the locusts first, THEN the frogs, so eat ice cream while you can.

Yes, the doctor did test for glaucoma. Fortunately, there was no swelling, just the possessed glowing red eye. No idea how it happened - could have run into a dog at the run or gotten hit by a ball. And luckily, his vision is not affected. Phew!

Dawling Petey
I'm so sowwy that the devil invaded youw poow eye
Thank dog youw Mom is so vigilant and caught the dweaded bloody thing in time to stawt making it bettew immediately.
Hope you stay safe in the huwwicane and get lots and lots of ice cweam to make you feel bettew.
I think we're supposed to get locust next, hehehe
smoochie healing kisses
ASTA