In our household, this is EVERYday!

Today is National Dog Day - what's new? - it's Dog Day every day at our house! I often think of Jerry Seinfeld's riff that if aliens came to earth, they'd think dogs ruled the planet, with humans as their servants who carry their waste in little plastic bags!

So celebrate like crazy today, Petey and Pals! Because the rest of the weekend here in NYC may not be so much fun. 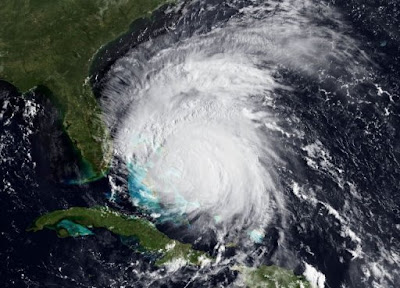 My biggest concern is not the windows blowing in or the electricity going off but what to do when it comes to getting Petey outside to relieve himself? I think one of my hurricane supplies is going to be some wee wee pads and just hope that he can think back to his puppyhood and remember what they're used for!

The following image has been all over the internet lately, but it's so beautiful and powerful, I felt it was poignant to share it with you on National Dog Day. 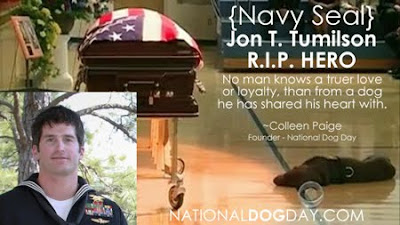 (Not meaning to be disrespectful, but unless there's a tennis ball or a doggie treat on my coffin, I don't think I can expect this from Petey.)

Finally, in the spirit of solidarity on National Dog Day, I thought I'd share this photo with you that was taken of Petey and Lil' Lacie this summer on Hilton Head. 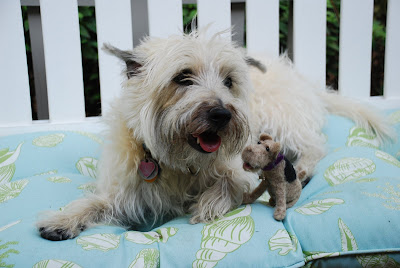 And in case you're thinking that "Hey, Lacie's butt doesn't look THAT big," Petey wants you to know that they are not sitting on a cushion, but a pair of Lacie's shell-printed bikini bottoms.

Have a great and SAFE weekend everyone!
Posted by Unknown at 8:53 AM

It's "dog day" every day here too!! We've got them trained.

We like the idea of National Dog Day. Now be safe from that hurry cane Irene. All our relatives are right in the path of the storm! Yikes
Benny & Lily

Wow! a whole day just for dogs. We think we will make the muzzer feed us hot dogs! One of our faves.

We are glad you and Petey are in New Yawk, and hope your place on Hilton Head is in good and careful hands as this storm approaches.

Muzzer says thanks for the idea of the pee pads...Teka always like chewing them up before peeing on them, so that is something to keep her busy.

It's amazing how long we dawgs can hold it when we know something's different. During Wilma, we lasted for hours and hours until Dogdad found a momentary let-up. Maybe go easy on the water...

But stay away from the windows...

Just a DAY for dogs? Not long enough surely?
Stay safe in the hurricane.

We're with ya on peeing during Irene! Stay safe, Petey! We'll be thinking of you!

National Dog Day has a good ring to it. My mom person was gone, but she brought me back lots of presents!