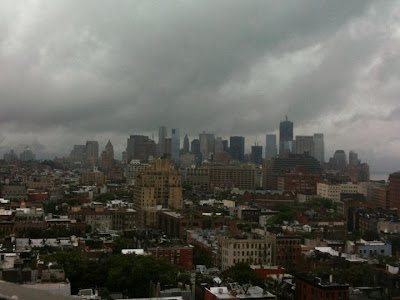 Looking south towards the tip of the Island. the fourth building from the right is the new tower,
now under construction.

Well, we've been waiting out the hurricane all day today. The streets are eerily quiet, though we did see a couple with their "Nuevo York" guidebooks trying to get in some sightseeing in the Village this afternoon!

Every time there is the slightest break in the rain, I've taken Petey out to "drain his squirt gun!" The city has either removed or turned the trashcans upside down so they'll be less likely to fly around when the storm really hits. Which means that the few available cans are full of poop bags! When Irene starts to blow, the sh*t could really fly - literally! 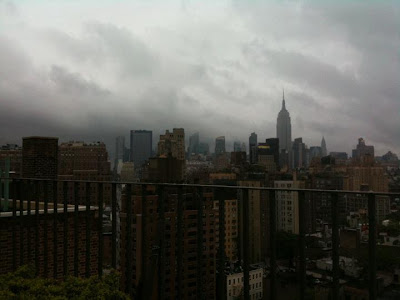 Around 2:00 p.m., I went up on the roof to see what was going on - hence these photos. Eighth Avenue is usually a ribbon of glowing red taillights up to Central Park and today - nothing. The shops on Bleecker Street are closed, some of them taped up with painters tape or masking tape, which I thought was pretty funny. Clearly these people are not up to date on their Hurricane preparations! The Michael Kors store was boarded up, except for two small windows on the side of the building which still had handbags on display. Figure those are the cheap bags! 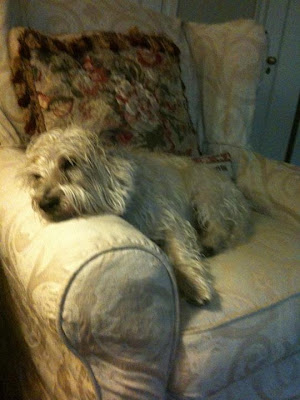 "Hmmm, how long is she going to expect me to hold it?"

Petey's not a fan of rain to start off with. even more so as he's gotten older. So I bought some wee-wee pads and opened one in the bathroom and am hoping he'll remember what they're for - that they'll stir up a memory from puppyhood. Of course, every time I take him outside, he'll do a quick pee and then pull to come inside. Where he goes to the kitchen and scratches his bowl for water! Nooooooooooo!

Thank you all for your kind thoughts and words as we face this storm head on. We really appreciate all the goodwill you're sending our way!

What views! It is always strange when things are so quiet. We've been checking in with hudad's family, all living in East Coast areas.
Stay safe and dry friends.

Thanks for the update. Glad you are able to take potty breaks. You're in our thoughts this weekend.

I never before had thought about the practicalities of dog potty time when confined to barracks.
Best of luck to you all.
Cheers, Gail.

We've had you on our minds and pray all is well.

Go, go away Irene. Petey, stay safe. Haha, squirt gun?
My mom calls mine "lipstick".
Oh you're back to your puppy-hood by start using wee-wee pads. Mine is old newspapers.
We're so sorry that we didn't visit you a long while, we miss you so much.
We're back, will follow you around!
Cheers!

Yikes, best to stay right where you are
Benny & Lily