A glorious Spring day -- at last! 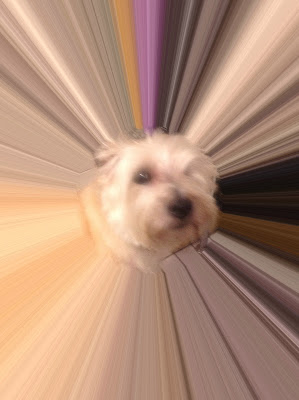 Okay, I have to start off with this "Fun with PhotoBooth" shot I took of Petey. He's a star! 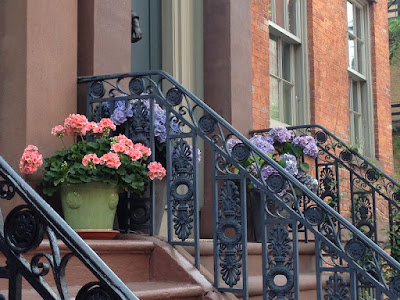 On our way to the dog run, I had to take a photo of these two beautiful townhouses with their delicate ironwork and gorgeous pots filled with geraniums and hydrangea. 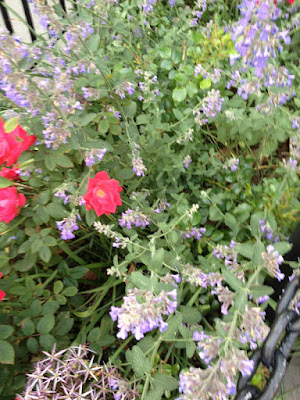 A planter full of flowers in the Meatpacking District. 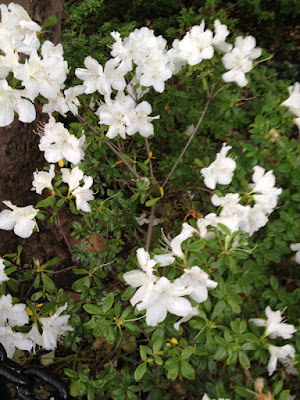 I was startled to see azaleas blooming in the park across the street - ours on Hilton Head were all over by the third week in March. 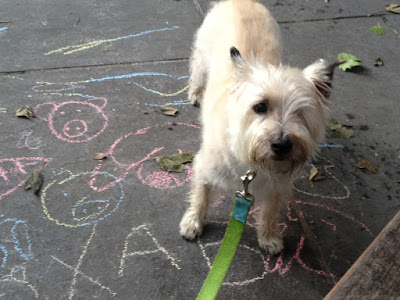 Ah yes! Back to what you came here for -- super cute photos of Petey with his new hairdo. 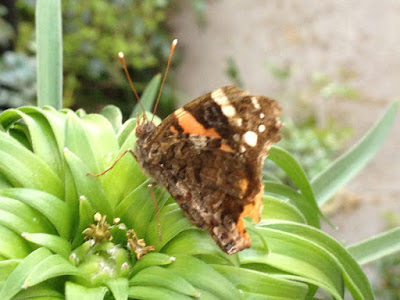 Yes, this butterfly was indeed in the heart of New York City.

On Saturday, there was a neighborhood "yard sale" on Perry Street. Since we city dwellers don't actually have yards or garages, they blocked off a block on Perry Street and residents could set up tables to sell their trash and treasures. There were some remarkable handcrafted and vintage items. As well as a man making (and selling!) Polaroid transfer photos. Petey decided to lie down on the sidewalk right in front of him so of course, I had to get a photograph. It came out really beautiful, looking like an old vintage photo. So I took it today to my friend John Esty's framing store.

John currently has two dogs - a seven-year old Bernese Mountain dog named Huff. (A bit of background - when I first met John 14 years ago when I moved to New York, he had a pair of Bernese Mountain dogs, a male named Hudson and a female named Madison - "Maddie." John had a pair of chairs in the store and the two dogs would sit on them as if on thrones.  There was a pet shop nearby and I'd always stop by and pick up a treat for his dogs before I dropped in. Hudson was very ill with cancer when I got Petey, so I gave Petey the middle name "Hudson" so he'd have the nobility of Huddy. Hudson survived long enough f to meet his namesake and even play a bit with puppy Petey. Very soon after Hudson passed, the breeder contacted John and told him that she was not going to be breeding her dogs again for quite awhile however she did have a puppy available. Though John was still grieving and not quite ready to get another puppy, he couldn't resist and so Huff came to live in New York.)

Huff and Petey are old pals. 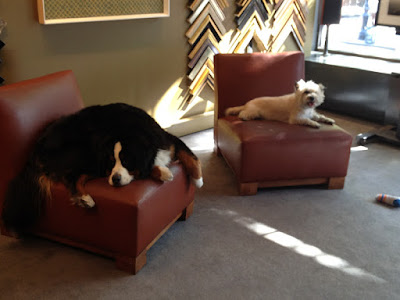 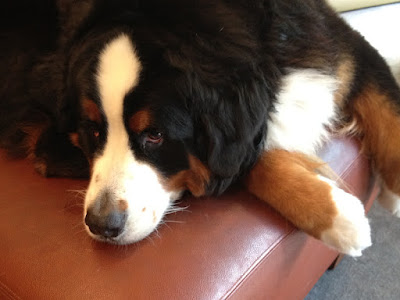 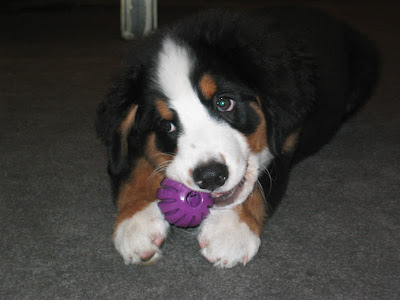 What a little knucklehead!*  *Knucklehead is a term of endearment. 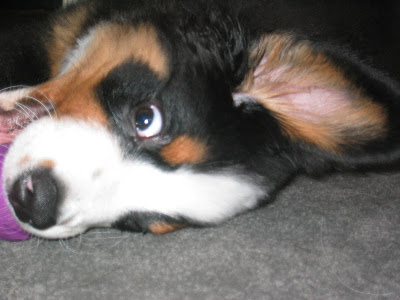 Look how little Huff is compared to Petey. (And that's the same chair in the background.) Petey's around 23 lbs. and he looks enormous in these photos. 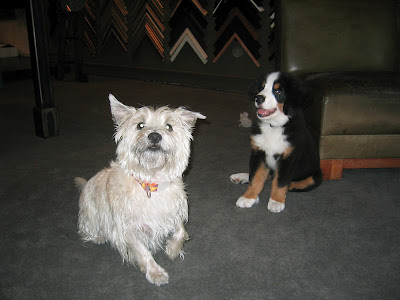 "Hey Petey! Got any good tricks to teach me?" 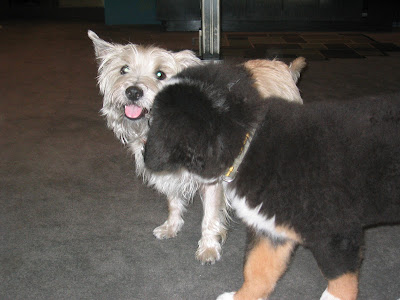 "How about just a little kiss?" 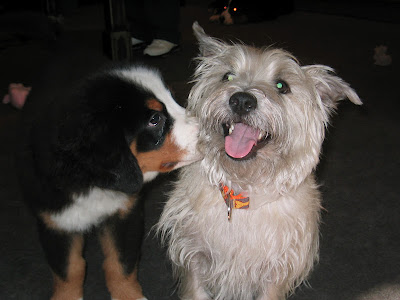 Huff was adorable and loveable then and he still is, a sweet, happy fellow. 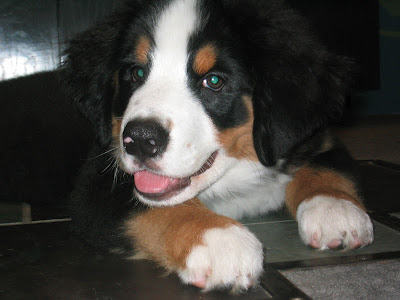 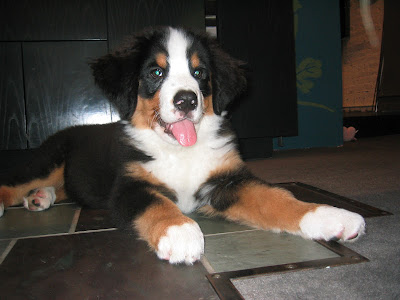 Look at those gigantic paws. Previews of coming attractions. 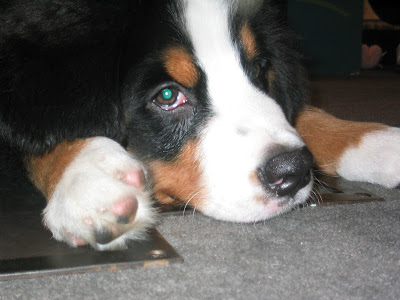 And here's John giving Maddy some love. She wasn't quite sure what to make of Huff when he arrived but very quickly, her mothering instincts took over. She and Hudson were both extraordinary dogs. They set the standard for Bernese Mountain dogs for me. Loyal, gentle giants with enormous heart and soul. 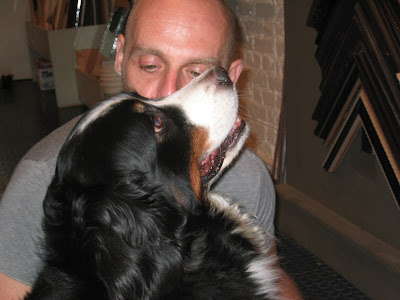 I always love a photo of a waggy tail in action. Petey loves to come visit John and literally pulled me up the steps to his store. 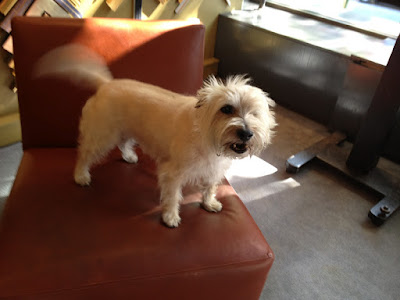 Huff's partner-in-crime is this sassy girl, Millie. She's a Chihuahua-mix rescue that John and his partner adopted a few years ago. She's a love muffin but a bit territorial when it comes to other dogs - she's a scrapper. Fortunately, Petey pretty much ignores her and doesn't possess much of threat so they've been getting along okay.  We just make sure that Millie gets lots of love and praise when she's minding her manners. 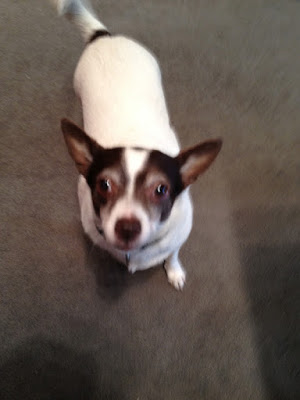 John is one of the handsomest men I know, but I couldn't resist posting this absolutely adorable photo of his and his girl Millie. 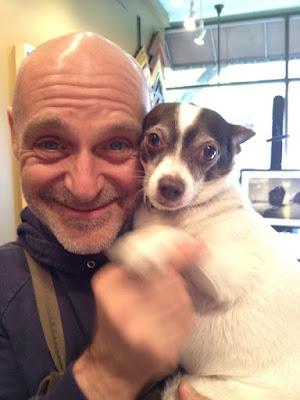 I'll be sure to post a photo of Petey's masterpiece when John completes the framing!

John's partner is designer and animal-rights advocate John Bartlett. Together they've worked tirelessly for the Tiny Tim Rescue Fund which helps get dogs and cats out of high-risk kill shelters and find them foster families until they get adopted. The fund provides medical attention, training, and socialization so these animals can get a second chance at a loving home. Please check it out. John B. also donates 10% of the proceeds from his uber-cool clothing and accessories line to the Tiny Tim Relief Fund. Because helping our furry friends is always fashionable!

Great to meet the beautiful Huff and Millie. But most of all we are looking forward to seeing the framed picture of Petey of course.
Oh, and please send same of that glorious Sping weather over to Scotland...
Toodle pip!
Bertie (and Gail).

OOOOOOOHHHH. We know the muzzer just loves those big BMD giants, so she has been breathing deep sighs while looking at the puppy pictures. Thanks to Petey for sharing another walk in the city.

Lovely photos of Huff and Millie! The puppy photos are sooooooo adorable! Have a great weekend from the Piappies!

Hello my friend! I would like to tell you that this post is great, awesome written including almost all important info. I’d like to view much more articles such as this.

It was so wonderful to meet Huff and Miller. They are such cute puppies in the photos. Thanks for sharing this with us. Have a wonderful upcoming weekend.
World of Animals