Mother's Day and Petey gets a $160 stripper!

We've got to begin this post with a greeting to all the Moms out there, whether your kids are 2- or 4-legged, we love you. I particularly love this photo of my Mom and Petey. They had quite the loving relationship despite my Mom's initial trepidation about me getting a dog. 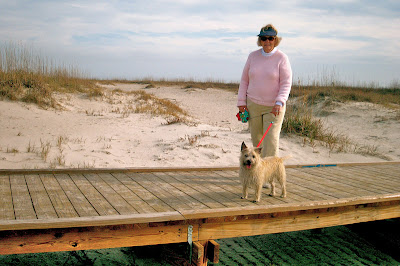 The weather in New York this weekend was gorgeous. Warm and sunny, cloudless blue skies. At last! Spring seemed to disappear right after Easter weekend so it was nice of it to reappear again before the heat and humidity of summer kicks in.

Petey hadn't been to the groomer since late October when an over-zealous hand-stripper left him looking as pink as raw bacon and with a bloody paw to boot. Now Petey is delighted to go to the vet - he'll pull me in there when we walk past, in large part to get a cookie. When we went into the animal hospital following his eye surgery, he was wagging his tail and wriggling with delight.  But whenever we'd even walk near this particular groomer, he'd cower, stop in his tracks and insist on going the opposite direction. Time for a change.

So we booked an appointment with a professional stripper at Downtown Doghouse who has worked on dogs at Westminster! Now my boy is handsome, but he's no show dog -- I just wanted to make sure he looked neat, comfortable for the warmer months, and had the least aggravating experience possible.

Here's his BEFORE photo. 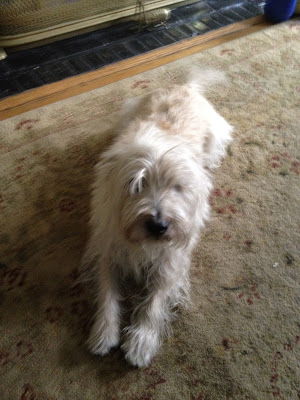 The groomer is located on 9th Avenue and 21st Street in the Chelsea neighborhood of New York. This street, from 14th Street to 23rd, is now sprinkled with some delightful Mom-and-Pop shops and cafes -- vanishing species as rents soar and bigger brands become the only ones who can afford to open stores. (You think I'm exaggerating? Rumor has it that Michael Kors is paying $50,000 a month for a space that's about 1,000 square feet on Bleecker Street. I read recently that Bleecker Street now has the most expensive per-square-foot rental real estate anywhere in the U.S.)

Anyhow - I digress. If you're planning a trip to New York this summer, don't overlook this area as well as the galleries on 10th Avenue. Fewer tourists, plenty of charm (plus you can always hop on the High Line nearby!) 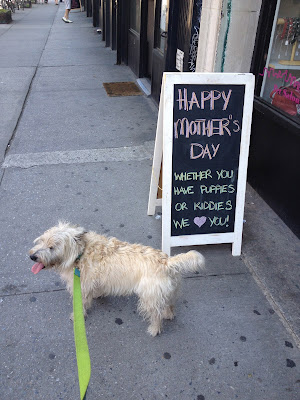 Here's Petey about to go in for his 4 1/2 hour grooming appointment! Yes, I know that sounds like a long time, but I was relieved to hear that they work on him for brief periods at a time rather than all at once, which is a lot less stressful when a dog is getting hand-stripped. Since many wirehaired terriers don't shed, they need to have their hair manually removed when their coat gets "blown" or loosely rooted. It's not really painful - like running your hand through your hair and getting a few loose strands - just tedious. It's also a specialty, so it can be hard to find a really good stripper - and yes, I know the irony of that statement, living in New York! 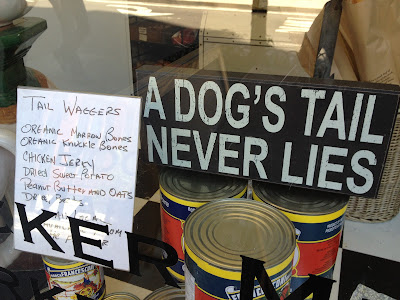 I loved this sign in the window of Knickerbockers Meat Market! They were closed by the time Petey was finished with his appointment, but I think we'll have to walk over there and get him a nice juicy marrow bone this week.

Since I had four hours to kill before I went back to get Petey, I decided to walk through Chelsea Market - another "must-see" for foodies visiting New York. The former home of the National Biscuit Company (Nabisco), Chelsea Market is now filled with wholesale bakeries and food stalls, while retaining many of the original industrial elements, like this waterfall that cascades down from a pipe a story above. Hard to get a good shot with all the tourists snapping photos. 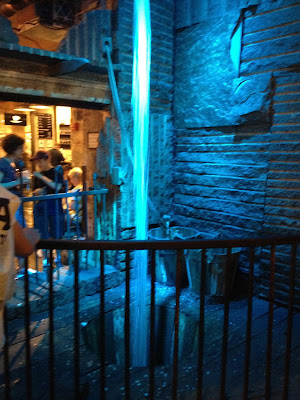 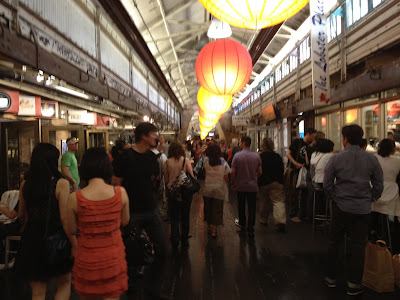 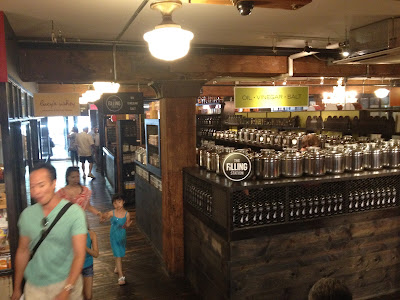 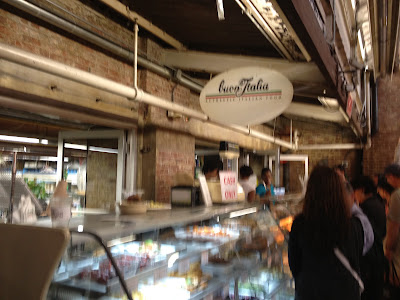 I love this big clock, just chained to a beam and the rough edges of the blasted out brick walls. 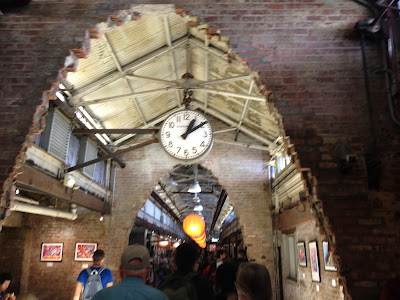 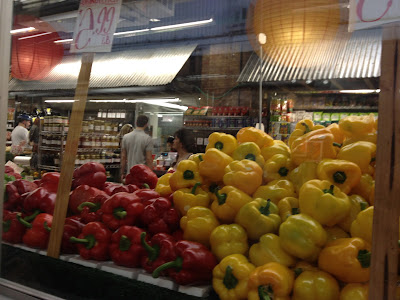 The bakeries were quiet today but there were still a few bakers and a rack of bread  just loafing around. 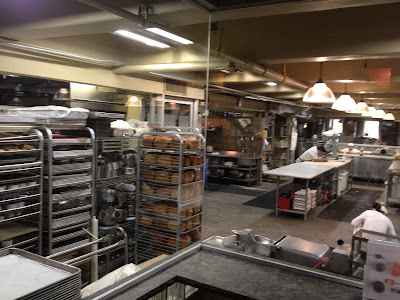 I love great cookery stores, but with a tiny NYC apartment kitchen, I have to be very judicious as to what I bring in. But that doesn't stop me from admiring all the colors, textures and implements. 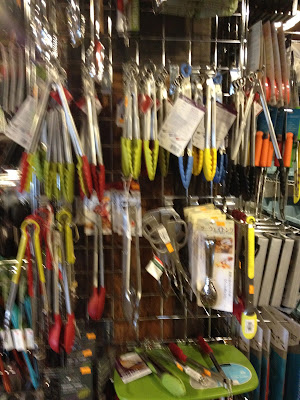 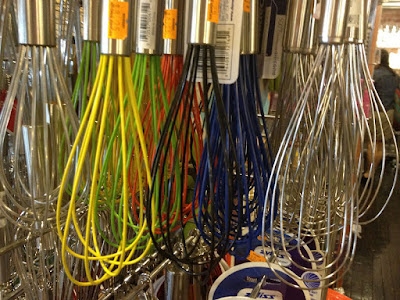 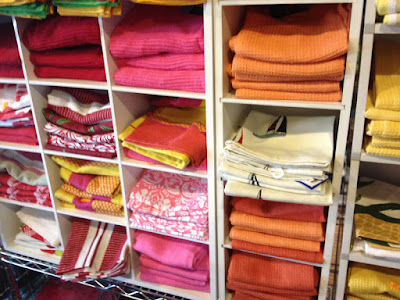 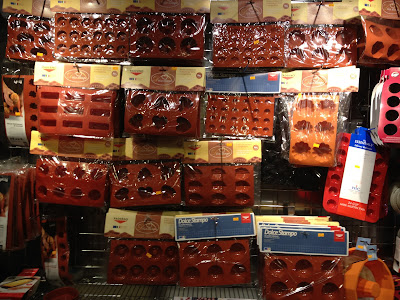 I like this poster of New York icons in the window at the Fat Witch Brownies. 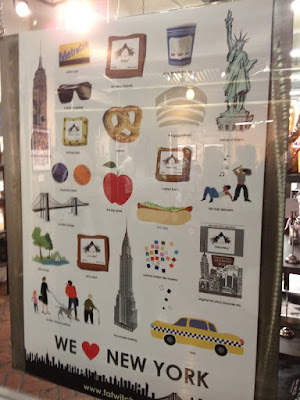 How about a dress made out of Eleni's cookies? You'll look good enough to eat, even if you're feeling crumby! 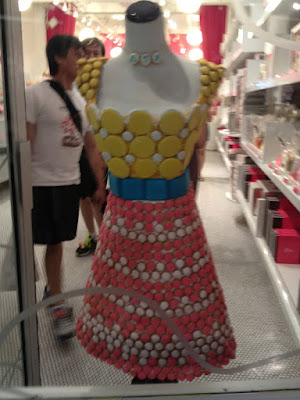 I had an iced coffee in a patisserie across the street while the groomer spent an extra half hour finishing up Petey's 'do, then I picked up my wriggly, smiling happy boy. He looked gorgeous! Like a velvety pup, not a scruffy scrappy street dog.

I've never dined at this little cafe but I love the name -- and their pretty container garden spilling out onto the sidewalk. 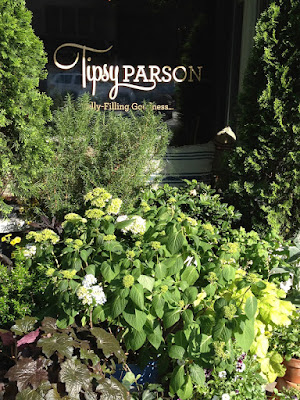 I'll have to go back to the Tipsy Parson and give you report on their "belly-filling goodness." 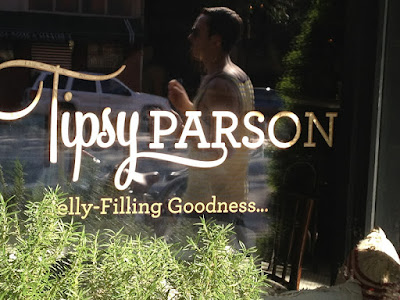 Shaking off his afternoon spent at the groomers, Petey was eager to show off his new haircut at this "no dogs allowed" bodega.... 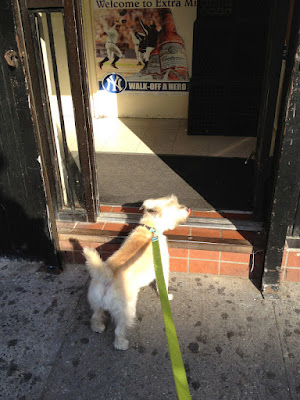 This shop has changed names and ownership but still is packed with fabulous French goodies, like the best finds from a Parisian flea market.  I bought a copy of a incredibly detailed map of Paris in the 1700's here --  it came in a portfolio with 25 segments.   I had them individually framed and hung in my living room on Hilton Head where my ceiling is high enough for it's 6 1/2' x 8' size. 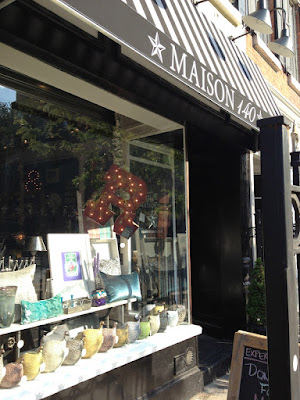 Having failed to get into the bodega, Petey tried his luck at a nearby bar.  While he wasn't allowed in, their open sliding doors onto the sidewalk allowed him to walk right up to three young men drinking mimosas and park himself under their table, much to my embarassment. The more I tried to lure him away, the more comfortable he made himself, giving me a "go head on home, I'll catch up with you later." 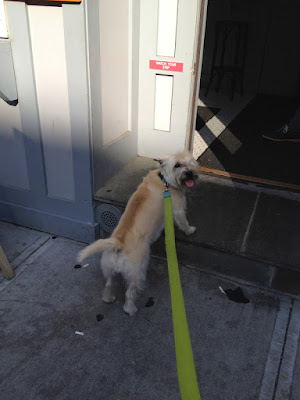 Outside the Maritime Hotel, Petey agreed to pose by this vibrant sign for Hiro restaurant. 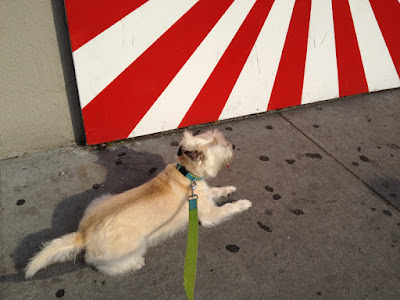 The Maritime Hotel was once the home of the National Maritime Union, due to its promity to the piers on the Hudson River. There is a 5' round window in each guest room, which have been designed to make you feel like you're in the cabin of a luxury yacht.  It's a striking building and I like the center courtyard with its dog-friendly casual dining and great pizzas. 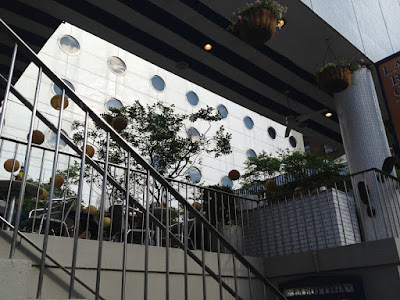 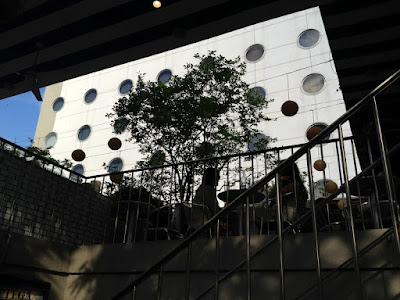 A stop-off at the dog run for a little tennis ball action, then home for  dinner and well-earned nap. So here is the side-by-side comparision of his BEFORE and AFTER photos! 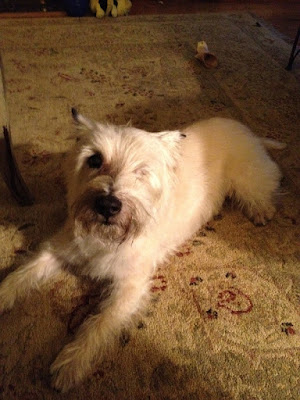 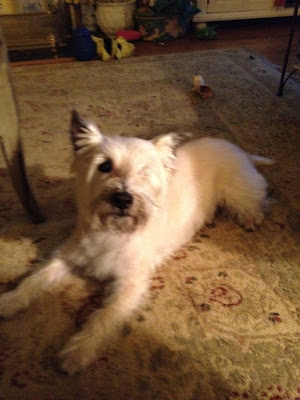 Thanks for the tour!
I loved it!
Aaaaand Petey!!!
You look super duper handsome!
Kisses and hugs
Lorenza

A cookie dress! We wish our mom would wear one of those! yummmmmm
You look most handsome, Petey!

Love ya lots,
Mitch and Molly

Yup, Teka thinks Petey looks most handsome and I really (really) liked the cookie dress. Don't think it would fit Muzzer, so I would have to eat it all to keep her from feeling bad.

That's a most impressive haircut, Petey! I personally have never been to the groomer...

Gail and I confess to racing through to near the end of the blog to see what Petey's 'after' shot looked like. Didn't that stripper do a great job? And I am going to ask that Gail spends $160 on treats for me, as compensation for the fact that she is too mean to pay a groomer and I have to put up with the homespun look.
Toodle pip!
Bertie.

Congratulations Petey $160 stripper was a great accomplishment and your so lucky and blessed to have your Mom she's very supportive to you! Happy Mothers day to you Momma :D

Yeah got to bark it, what a humdinger of a feast for the pies you are Petey. That hot stripper of yours was worth every penny.Did you get the extras she offered on the side too??!!!!! Teeheeeee!!! Looking so hunky handsome you'll have all the girlies swooning lucky dog.BUTT.ITS A BIG ONE. Snigger snort!! In more ways than one. Avoid the flakie Lakie for a few weeks or so eh?