I'm gonna be a mountain man! 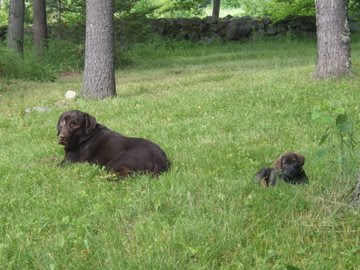 The handsome big chocolate lab is my buddy Scout. The little pipsqueak is his bratty little brother Harlan. (Don't be fooled by his adorable sweet face!) We're all going with our Mommies up to the mountains this weekend, just an hour south of Canada, near Lake Placid. 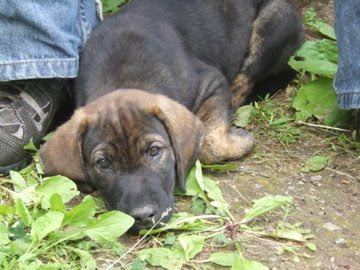 Scout and Harlan's people are getting married in August on their 200 acres of woodlands and we're going up to help get it ready. That means lots of time off leash, splashing in creeks, rolling in the grass—he-man dog bliss. As if a 5-hour car ride wouldn't be fun enough!!! (I LOVE cars!!!)
If it were just me and Scout, it would be heaven on earth. But unfortunately, Harlan's coming, too. Harlan's now all grown up now but he still acts like a puppy. And instead of respecting me as an elder, he treats me like a big stuffie. My poor ears ache at the thought. I'll have to show him what a Terrierist he's dealing with! Scout used to give me noogies when he was a pup, too, and now he's a respectable dog, so maybe there's still hope for Harlan. Grrrr!!!! Woof!
Posted by Unknown at 10:14 PM

Petey
I hope you have a great weekend in the mountains!

You are gonna have sooo much fun I know!

Oh, it must be ouchie to be treated like a Stuffie. I hope Harlan play nice with you during this trip

It sounds like an awesome trip, Petey! Make sure Harlan behaves himself or else!

This Hilton Head place is scary!!! Those gators and turtles are really snappy with hoooooooge toofers!!!

Mumsie is barely able to move with all the bike ridin' and gettin' lost every three seconds...it took her an hour to get to the beachie yesterday when she made a wrong turn...shoulda taken 15 minutes. She doesn't do well with maps.

You and Sweet Asta are gonna have a blast down here!!!!!!! I suggest a ton of sunscreen...u white dogs have a tendency to fry ur tummies...

And the sting rays are rather fun to pawty with too...sorta scary lookin'.....

Have a blast on ur trippie...be careful in the mountains of those snakes and thingies.....

I know you will have a wonderful time in the mountains!

You are a TERRIER I know you will show that Harlan who's boss! Lake Placid area sounds like fun! Make sure you have your tick protection on, however!

You're just going to have to lay down the paw with Harlan! You show him that terrier toughness and he'll respect you. Have fun!

Love the lab (and the Cairn, of course).

Hi from www.wuffstuff.com, the social network for dog owners and dog lovers.

We're looking for members with quality dogs and 'tails' to add stuff to our site.

Hope you have time to have a look at us.

Now how could a sweetie little puppy get the best of you? Ha, ha, ha, eary huh? Hope you have a fun time this weekend together. Watch out for the little one.
Sassy & Momo

OMDOG have FUN! I hope Harlan behaves himself!

Petey, Have a good time in the Mountains.Is it Placid near Lake Placid? Terrier-ise Harlan straight off to show him who's boss.

You're all going to have heaps of fun Petey. Hopefully Harlan is gentle with you.