Decided I needed to defend my honor while the little squirt was trying to get the tennis ball out from under the couch for the 100th time since he got here! 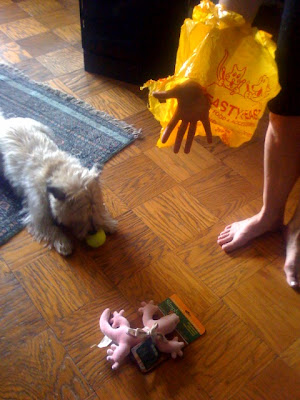 It all began before we even left New York! My brother Scout and I were wrassling when Petey showed up. Our Moms' were busy taking stuff down to the car. When they came back up to get us, the Beasty Feast bag with the new toys had been torn open and the new toys were on the floor! Did they blame little squirtball who was busy with the brand new tennis ball? NO! They blamed poor me, Harlan! 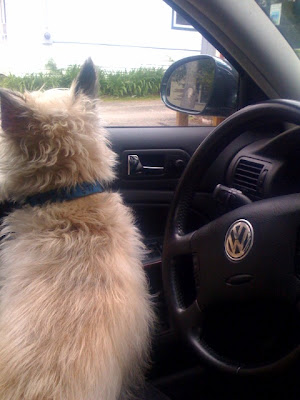 Just because I was unjustly accused, Petey got to drive. Of course he took a so-called short cut that got us lost, so he had to pull over and ask for directions.

Scout and I were just happy to look out the window and catch some tasty bugs. Ahhh, the best bugs in the world come from the Adogronacks! 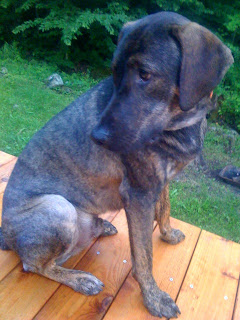 Once we got here, we were romping around on the grass - you don't know what a thrill this is for city dogs who are constantly on concrete! I was executing a particularly dramatic jete into the weeds and tall grasses when I fell into a gopher hole and twisted my leg! Mom thought I might have even broken it, as I let out a big yelp! We called the vet when we got home and she thinks it's probably a sprain. But I've been very stoic all evening as you can see from this photo.
More tricks tomorrow.
Your dignified friend,
Harlan
Posted by Unknown at 10:17 PM

Shoot! Just when you're having so much fun you go and twist your ankle! We hope you're feeling better, Petey!

No, Maggie and Mitch, it wasn't me who twisted my ankle, it was HARLAN! He's off at the Vet now because he's still limping and that's after a good long nap and some Advil. I'll keep you posted.

Hi Harlan! I am so sorry your leg got hurty. I hope you feel better soon!

sounds like you dogs will be lucky to make it back in one piece! Be careful out there and be nice to Petey!

OWWW Harlan that sounds painful. . .are you ok? What's a Gopher? Another name you call Petey huh???!!! Did he dig that hole for you to trip up in . . . .terrier-ble and you watch where he leaves those tennis balls, specially the slimy unwashed ones, or you'll be a- tripping on them too dude.

Petey, Petey....come and lookie at what happened to Stuffie Stan now....I have to go and finish postin' it, but I wanted to give ya a heads up...it's not pretty!!!

Be good to our Petey Boy! I'm sorry you're off to the vet to have a look at your ankle, but it sounds to me like there's still lots of wrasslin' and good times to be had in the Adogranacks.

Please give Petey a goober smooch from me.

Harlan!
I hope your leggy is feeling better. I usually leave the jete tricks to the ballerinas! tee hee.

Petey looks like a good driver. Sorry you got lost but I bet you saw some cool sites.

Oh dear we hope it is just sprain and you will be better soon! Love A+A

Hi Harlan
Nothing like a bit of greenery to romp around in but how is your ankle?? Cripes it doesn't sound good.