My third date was with that fluffy adorable Lhasa Apso Abby!
She's a fellow New Yorker like me (though she lives upstate) so I had a surprise or two in store for this little girl.
After picking her up at Penn Station, we stayed right on 34th Street and headed to the ferry dock. I told her we were going on a scenic cruise around Manhattan. She seemed a bit disappointed but soon her ears were perked up and her tail wagging again. 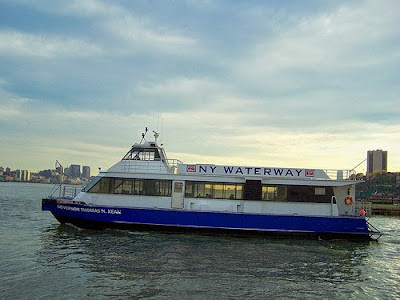 I guess she thought we might have been going on a fancier boat...
We passed by that gorgeous lady of the harbor, the Statue of Liberty. 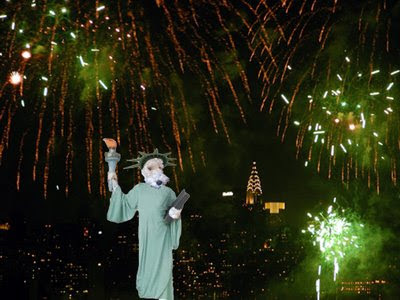 There were still a few fireworks going off since July 4th. We have a really big display in New York - it goes on for the entire month of July!
Then we made our way up the East River and stopped at another ferry wharf. Suddenly Abby started barking excitedly! "Yankee Stadium, next stop?" she asked. "That's right!" I said. That's when she noticed that the ferry boat we were on was named The Yankee Clipper, after a famous Yankee Loving Joe... 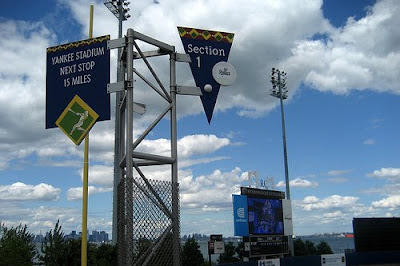 No, not that Yankee Loving Joe...Joe DiMaggio. 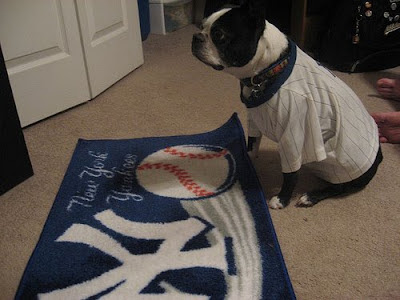 Abby was a wriggling mess by the time the Cathedral came into view. This is the last season at Yankee Stadium after all. We were both quite emotional. 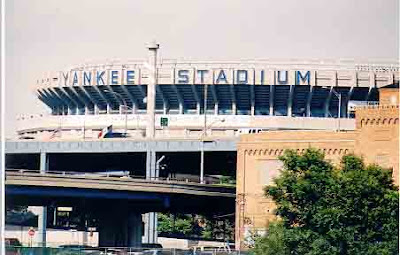 I handed our tickets to her. You'll notice there are three tickets. You're never going to guess who we were sitting with!!!

It was a beautiful day. A perfect day for a baseball game. Abby and I held paws as we walked to our seats behind the Yankees dugout.

Abby couldn't believe who we were sitting with! And in Alex Rodriguez's seats! 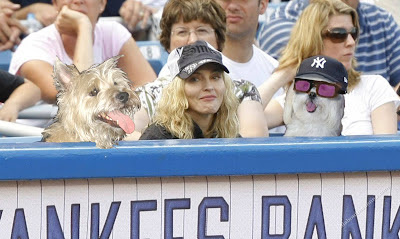 Doesn't Abby look cool in her groovy purple sunglasses and her Yankees' cap? Madge (she told us to call her that!) wanted to know where she'd bought them. (She also wanted to know who does my haircolor. I told her I was a natural blonde.) 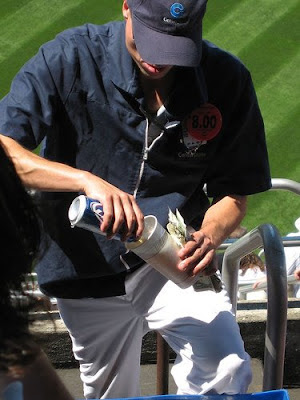 I summoned the beer guy and bought drinks for the ladies... 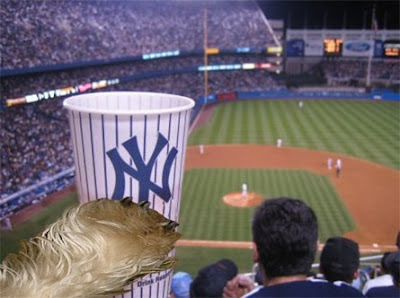 It's just not a ballgame without an icy cold brew and some peanuts, right?
My stomach was still a touch queasy from the pizza (NOT the Pawtinis, Dewey!) so I just let the ladies split the sausage with onions and peppers. Boy, for a skinny girl, Madge sure does know her way around a sausage! She kept referring to it as a "banger" with that funny quasi-English accent of hers and knowing her past reputation, I was afraid things might get too racy for Abby. She is a rather sweet young doggie, after all. 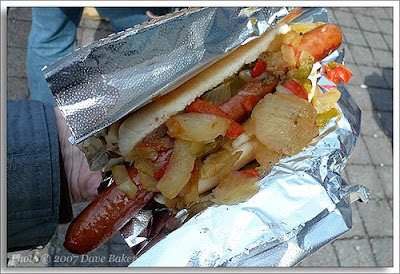 I noticed A-Rod kept looking for someone in the grandstands...who could it be? 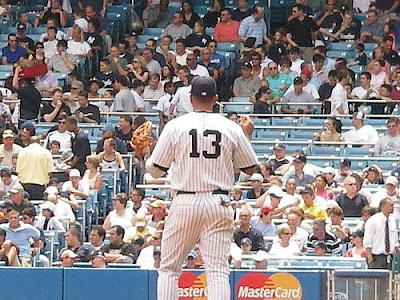 Ends up it was Abby!!!! He refers to her as A-DOG and claims she's his soulmate!!!! She's been taking him to Kaballhaso classes (they're kinda like obedience school classes).
You should have seen his reaction when he finally spotted her in the stands! 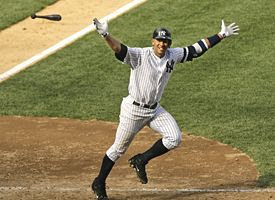 Needless to say, there were hecklers there from Boston who held up photos of Abby to distract A-Rod whenever he came up to bat. (She's one cute platinum blonde, isn't she?) 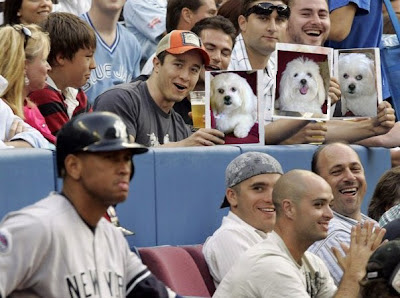 In the fourth inning, I caught this fly ball! It's in perfect condition, except for a few teethmarks.

During the 7th Inning Stretch, we stopped at the souvenir stand and picked this up for Joey. 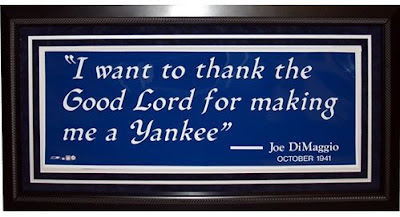 And this patch for Tanner to sew on his cape. 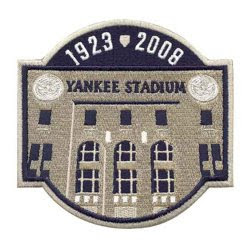 It was a perfect evening—we even won the game!!! They picked Abby and I out of our seats and carried us around the field. Then they put us down and let us write our names in the outfield. History in the making... Right on cue, the blimp flew over the stadium and spelled out:
"Abby, will you accept this rose?"

She looked around, but A-Rod had already headed towards the locker room, so I had to explain that it was from me.  Now to wait for reply...
Postscript: I'm home now, watching The Wizard of Oz on television which despite the scary spots is the BEST movie ever! You know why? 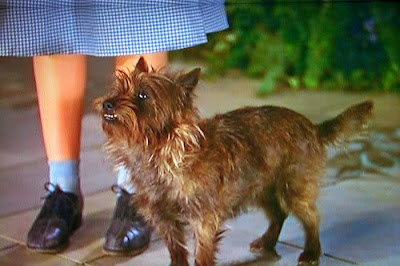 Because Toto was a Cairn Terrier from Kansas, just like me (only about 10 pounds lighter and gray!). I'm petitioning MGM to change the name to "Toto Saves the Day!"
Posted by Unknown at 11:20 PM

Hey Petey, I don't think you need any tips from me pal, you seem to be doing fine with the ladies. I don't thing you're going to get any complaints from Abby. Who's next? J x

Hi Petey,
I dedicated one entire blog entry to you... Go and check out my blog! Hopefully it'll get the attention of even more girls! (Yeah my hammie sister is still interested...)
Wow.. 3 fabulous dates.. let's hope one of them will work out!

wow you gone on many dates...must be fun.

Oh wow, you sure are keeping yourself busy with some hot dates there! And all in no time at all! Salute!

By the way, you've been tagged hehe...

Our Daddy went to Yankee Stadium when he was in New York last week. He didn't see a game though, the tickets were sold out. ~Socks, Scylla & Charybdis

Your dates are soo amazinggg. My mom says it's a shame that I'm too big to go on a date with ya. She's kinda right, all I'd wanna do would be to box with ya. Anddd uhh...I don't like to lose. :X

Oh My...I had a such wonderful time on our date...

I'll be posting all about it a little later when my Mom gets home from work...

Thanks for a lovely time!!

Another fabulous date. After seeing what you have planned for each date, I believe more girls will be put in their application to date you.

Hey Petey, Hmmmm. Do all these innocent girlies know about each other? And who else you got in your little black book? Any dog I need to know about..don't take out my smitten kitten chosen one will you? And don't forget your heart belongs to Mommy.

That was a great date. Who knew she was so famous?

What an exciting date! But I think Big Pupi would have rather it taken place in Fenway Park. Yeah. We're on the "other side" around these parts. Glad you got to pay the Bronx stadium a visit though. It will be sad to see it go!

Scottie here...nice to meet you! That sure is one cool date! And Abby is gorgeous! Lucky you...=)

Your date with "A-Dog" looks like loads of fun. I am glad you got such good seats for the game.

Poor A-Rod. I bet you broke his heart when he saw you with Abby. Good thing they won the game. Petey you really are a player.

Lady Liberty looks a lot like a doggie I know.

Wow! Dates sound like fun! My sisters say I am not allowed to date yet because I'm still a puppy. They said your blog was probably to grown up for me! I told my oldest sister that was not fair, after all she had her first litter when she was only 3 months older then me now. So she had have boyfriend before then right? I'm going to sneak on your blog anyway!

What a great date! Good food and good company! You're a good guy, Petey!

Hey Petey. You sure have a way with the ladies! You and Abby make a great couple - no contest with A Rod.. you're totally better looking. Hey listen, can you give me some tips on how to ask Asta out on a date? I have a secret crush on her. Petey, I wanna be on the Hot Tamale train, just like you.

Hi Petey!
Abby is such a cutie!
We don't know a thing about sports, but that date was amazing!
Wags and licks,
Maya and Kena

Hi Petey!
Thank you! We'd love to have a chance to go out with you!
Wags and licks,
Maya and Kena

Hi, Petey!
I think you are making progress with your dates!
I am sure after this, Abby will forget about A-Rod!
Kisses and hugs
Lorenza

Petey,PL2 is crying she is laughing so hard... we don't know what is so funny....This looks like a fun date( those Boston fans huh!!) but we are not too sure if she is the one...........we say keep trying little buddy,Oh and thankyou so much for my write up..I am not named after Agatha Christie but after an Agatha in a PG Wodehouse novel(she is is bit prim and proper and a bit of a pip) Archie is also named after a character from the same book and this one is a goofy,loveable nudnick...Need I say more? Quite apropos!!!! Love and kisses A+A We are going to post your write ups if we ever gt acees to a computer again for more than 12 seconds...

Ok first of all, I am totally jealous, but you guys are SO pawesome to pic up that sign for me!!! A-Rod is kind of goofy, but we love him since he is a Yankee. THis is the best date so far for sure, but at the end I dunno if Abby was really focused on you...

Thanks for dropping by my blog. I agree with renaming the film.

My Mom let me Blog about our date...

Stop by my Blog...The answer to the rose question is there...

I see ya had a great time with Abby...yer gonna need a long rest after ya get all over this datin' stuff....it's likely ta wear ya out fer sure...where are ya gettin' all the money fer the dates?