Phew! I wish I could say we've been too busy to blog but the truth is, we haven't been up to much. Or when we have gone out and about, we haven't had the camera with us.
Anyhow, I got a marvelous package in the Royal Mail from my bestest pal Eric Square Dog! He's such a sentimental chappie, he sent matching wedding presents to me and Rosie Posie.
I gave the parcel a good sniff, then headed off to open it.
Okay, so Mom had to help me — look at that wrapping paper in his signature color!
It's heart-shaped tennis balls! One is blue for me and the other is pink for Rosie. He's such a pal, he sent a set to her in Scotland. Apparently, my bride has a quite a mouthful of gnashers and has made short order of his lovely gift. Fortunately, mine are still in pristine condition (I'll hide them when we're together!)
And the next day, I got this beautiful Valentine from my sweet wee wifey....

And speaking of wonderful presents — look what Asta's Dad delivered to us at the dog run last night. It was a bag of goodies from Ruby! We missed her Mom's visit to NYC because we were in South Carolina then but she brought this wicked cool 4-way tennis ball tug toy AND a deer antler all the way from Arizona for ME!
(Wouldn't it be funny to see the Dughallmor beagles with this toy? Each with a ball in their mouths pulling a different direction? Those crazy in-laws!) 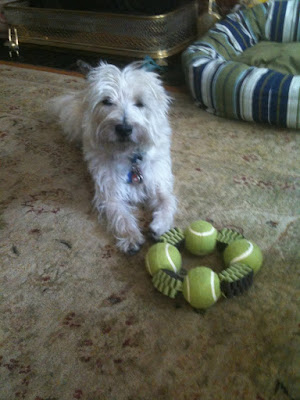 I carried it all the way home from the Dog Run! Thank you SO much Ruby and Eric!!!
Speaking of the dog run, guess who I met there? 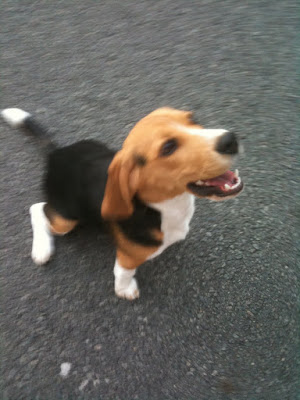 No, it's not Rosie! It's a 5 month old Beagle boy puppy named SNOOPY! Isn't he just the cutest? He's got Rosie's pretty eyes lined in black and a big dark saddle. 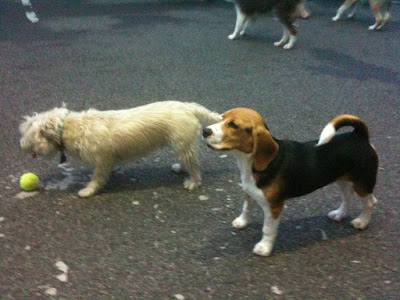 He's been trying to learn how to fetch. I've been giving him some lessons. 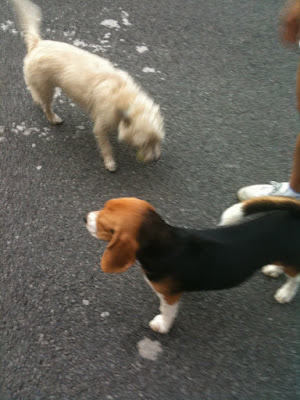 Mom's just in love with him. He feels like he's covered in the softest velvet. Ahhh, just like my Rosie! 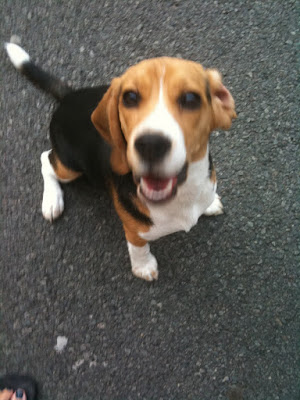 Okay - this is a long post for not much news! Earlier this week, these signs started appearing on the street behind our apartment. "Untitled Project" - HUH! It's the new Sex and the City Movie!!! 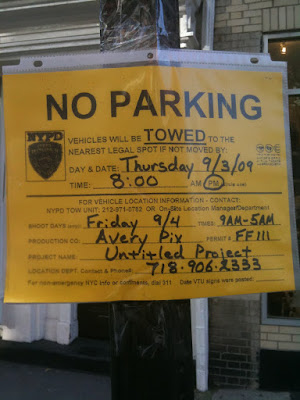 Yesterday, we saw them putting flowering plants around Carrie's building. That's it with the red ladder. It's supposed to be up on the Upper East side but this is real location they use for exteriors. There are always tourists from around the world posing for photos out front. The funny part is - Sarah Jessica Parker lives almost directly behind it on the next street over! 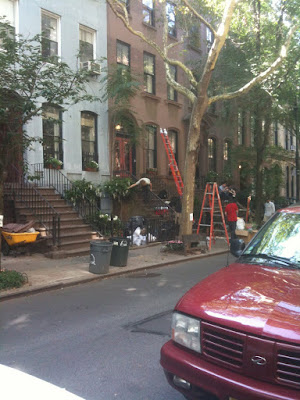 By this afternoon, big crowds had gathered, hoping to catch a glimpse of the filming. 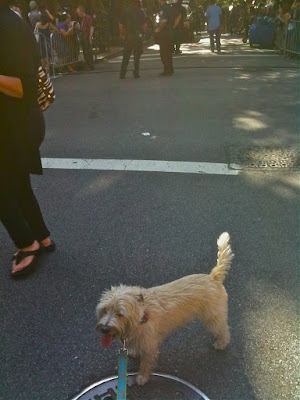 Tourists, papparazzi and me — a little dog out for a walk! 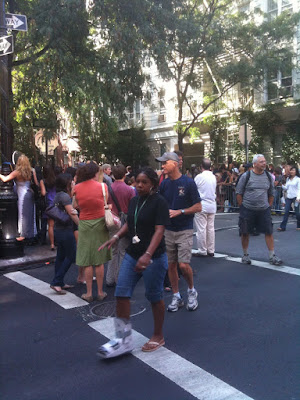 I had added an authentic touch to the first movie - they had covered the street in fake snow so I wrote my name in it! 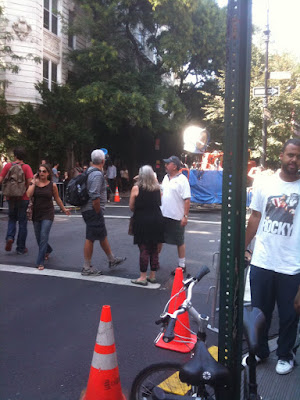 Enough of those girls — I think they need to add a handsome Cairn terrier to the mix to liven things up for this next movie! 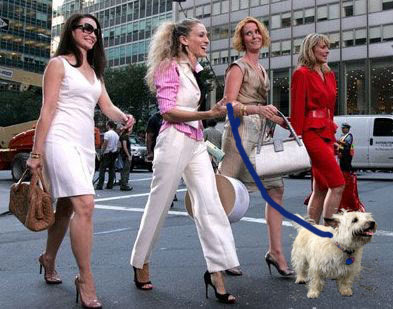 WOW! What a week! Hanging with the stars, getting pressies, making new friend, meeting old friends (not that Asta is OLD, just that you've been friends a bit longer than with the wee beaglet). Have a great holiday!
Bonnie

Mom says she'd ALMOST go see the movie if woo were in it!

Those were some pawesome pressies!

Yes, your new beagle pal is a khutie!

That little Rosie look-a-like is one cute little guy. Its nice that you are teaching him things!

Petey
Sowwy I took soo long to delivew the package..I sowt of hid it and then fowgot,then mommi was looking fow somthing else...well you know..glad you finally got it.
Those toowists looking at the pwetend apawtment awe soo funny..I aways stawe at them and giggle.
I think the whole movie would be gobs bettew wif a caiwn ow even a foxy giwl.
smoochie kisses
ASTa
pee ess that valentine is the best!

You lead an exciting life for someone who claims there life isn't exciting.
Sally Ann

I do agree you should be in the next movie, you could live with Charlotte and her dog Elizabeth Taylor. My Mom is a big fan of the show and the movie. I love all your new toys, you are a lucky guy.

licks and sniffs, Sasha
p.s. If you get to be in the movie, can I get your pawtograph?

Wow - there is lots going on around your place. My D didn't watch the last SATC film - but she definitely would see it if you were in it.

Love those tennis balls - I think you should hide them from Rosie - they are too cute to destroy.

LOts of licks
Sally and Paddy

Hi Petey
We have missed you! We just loved the very sweet wedding present Eric sent - matching balls - what a lovely thought!
Lots of other goodies too - it is lovely to have friends.
Snoopy was the most adorable puppy beagle!
Of course he would have been even more gorgeous had he been a basset puppy but he was mega cute!
We are pleased that you are trying to teach him fetch - if you manage the big where you give the ball back to the human then you must come over to Scotland and teach us!
We were very excited to hear about the filming - we can imagine the excitement and there in the midst of it was you - out for wee!
So fitting somehow. We actually think the movie would become a blockbuster if you were in it!
You looked the ultimate must have accessory in your picture - still you will have more fun at the dog run with your balls!
Take care - and put that lovely valentine somewhere safe - who ever would have thought that Rosie could be so romantic - we saw what she did with her lovely balls!!!
love
Aunties Martha & Bailey xxxx

Petey! Those actress ladies think doggies are accessories. I think you should stick with your mom and not hang out with them.

What a pain to have no parking.

Nice body shots. I bet they would cut and paste nicely (hee hee).

Wow...we think you are right about joining the cast of SIC...maybe you could convince them to do a location shoot in Scotland!

Gosh, I bet if they seed you they'd so want you to be in the movie. Very cool that you live so close. I bet lots of people is jealous of you.

If I were there I would put muddy paw prints all over those ladies' nice white clothing and they would be so happy and it would be CRAZY AWESOME!

You certainly are a busy beasty boy.

PS- I totally dig those salon highlights. My mom goes today for a grooming... I wonder if they could squeeze me in? I'm thinking of going red...

Wow! You are so famous that I'm not even sure I should be allowed to post here! What an exciting time you've been having; lucky guy!

Hey Petey. I'm wagging you liked those heart shaped balls.I take my bestest dog duties seriously. Made my day to see you open them up too! Thank you. I'm blogging about your and Rosie's gift when Mom gets her act together. As for Sex in the City ...haaa funny but forget it. You can star in my Pet's in the City with me and Otis or I'll sell you the franchise for you and Mica!!!! Haaa. No wagging wonder I got to be so rich.

Snoopie looks a real handsome boy Must be a nice reminder of your Rosie Posie every time you see him.How is he going with the ball games? I've been learning Petey in your honour! You'd be proud. I can play catch now like a pro.With a ball. A frisby. Forget it...

Happy looooong weekend to you all.
Wiry loves and kissies Eric xxxx

Oh Petey...we've missed ur sarcastic wit...I mean ur soft furry sweet self...have you gotten longer?? That one pic of you seems like you've been stretched or somethin'....get caught in a revolving door??? Just kidding Petey...and by the way...I am a size 0 and you know it.....sometimes a girls 12...just depends on the cut...(Lacie sighs...she knew she should have cut out the desserts...)

The Adventures of the LLB Gang said...

Hi, Petey!
Glad to see you!
You got very nice presents!
You look great there with the sexy ladies!
Kisses and hugs
Lorenza

Yep we totally agree with you Petey. You definitely add style to the photo.
That Sarah Jessica Parker doesn't have far to walk to work does she hehe.
Well considering you haven't been doing much, that was a very entertaining post.
D says she is looking forward to seeing that building for real next year. She'll have to watch the first Sex and the City movie which she's heard is pretty good. She's never watch the show so hopefully that wont matter too much.

Yes, Petey, we agree that your presence would add a lot of substance to a new Sex and the City movie!

Those gals are very smart NOT to add you in there movie! YOU will steal the show! You are way too cute for and smarter - the challenge will be none! LOL! Enjoy the rest of your weekend!

PS I love your Petey and Rosie heart!!!

Great presents you got!

Wow, we're so impressed with the filming going on around you - well, the not-so-little man's sister is in particular!! She was so envious of you!

You are definitely what this movie needs, Petey! Look at you strutting with the pretty ladies!
What nice pressies you got!

Petey, You look as fabulous as ever, and I love that 4 way tennis ball thing. I wish beyond wishing that I could go to NY and play with you. Snoopy is super cute too. But about that Sarah Jessica Parker. Can I just say that I am so much better looking than she is. And you are so much more handsome than Mr. Big too. Giant smoochies to your mom.

Gosh, you do lead a glamorous life pal. If I were younger, I'd be over to New York faster than you can say liver-based dog treats! We in this household think that 'Sex in the City' would be SO much more interesting if it had you in a starring role Petey...
Cheers! H.

Great prezzies, Petey!
And I really have to get over to the run again. I'd love to see you and meet that new pup, Snoopy. Mom's finally reupped the membership.
BTW, you really class up the SITC girls.
Luv,
Duffy

We have missed you Petey! Mom's finally letting us catch up visiting our pals! Loved the videos and pics. You really raked in the goodies!!
Tell your mom our mom has been thinking of her alot.
Hugs
Sunny&Scooter
pee ess mom finds it interesting that the word verification is sister. Sisters in spirit? :)

he he he! The last photo of you with the Sex and The City Gals, is soooooooooo you, Petey, just so you!!!!!

sorry I have been lax in commenting, my life has been a bit topsy turvy just lately what with my court appearance looming.

The Beagles have agreed to act as character witnesses for me, your Rosie is so sweet! And kind!