Can you even find me in this photo? 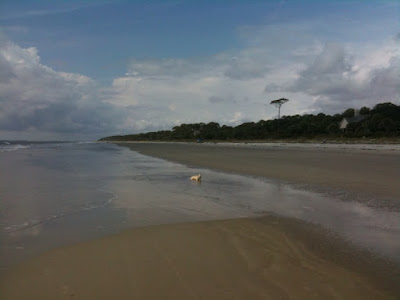 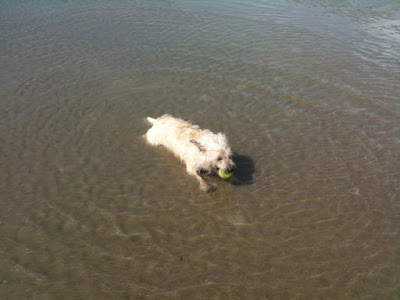 The weather down here has been hot, sunny and a bit too humid for Mom's liking (or at least, Mom's hair's liking) — perfectly gorgeous. We had super high and low tides last week - over 81/2 feet! - which means big wide open beaches as the tide's going out. I love it because there are plenty of tidal pools to take a dip in.
Now throw the ball already! 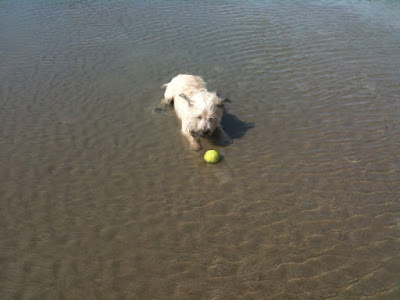 Here I am ignoring Mommy because I know she wants to throw the ball into the ocean so I have to swim a big. No thanks, too many breakers today. We did meet a man walking two ginormous dogs. One was a Black Russian Terrier who weighed in at about 100 lbs. She was an alpha female and her owner said she'd make mincemeat outta me. No thanks! I play with a Russian Terrier pup at the dog run in New York named Sputnik and he's a big sweetie, but this one takes her guard dog reputation a bit too seriously.
But her pal was a big friendly Airedale boy named Briar. He was even more ginormous than the MIA Stanley of Gooberstan! I asked Briar if he knew what had happened to Stan but he didn't have a clue. 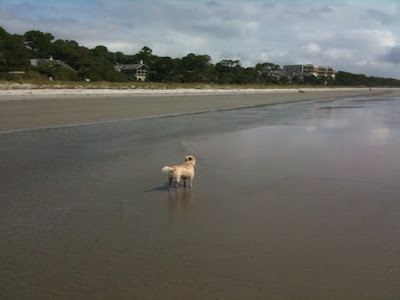 Here are some beautiful sky shots from the beach. We watched this storm moving across the ocean, but then it disappeared before it ever got to shore. 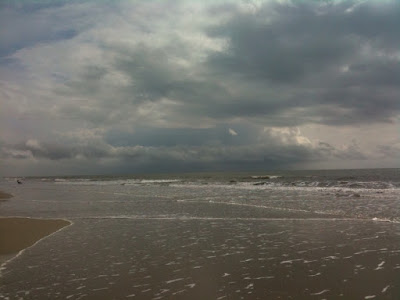 Here's some more rain over the ocean, near the shipping lanes into Savannah, Georgia. Oh! Noah asked where we are — we're on Hilton Head Island, off the coast of South Carolina. It's the 2nd largest island on the East Coast after Long Island. There are lots of tourists here in the summer, but right now, it's mostly Islanders or families with very young preschool age kids. My favorites! They're just my size and they'll throw the ball for hours. 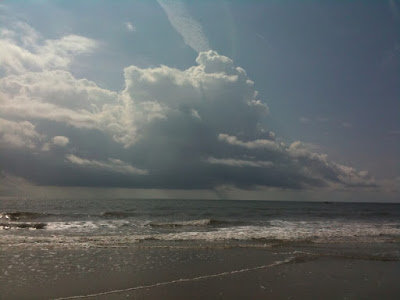 Still more rain that never made it over here! 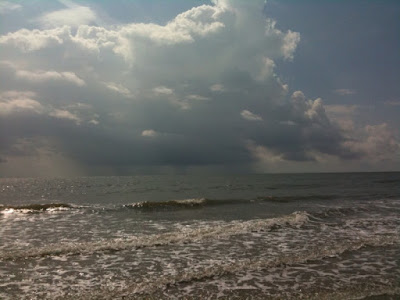 Ah, here's one of those adorable toddlers who just can't get enough of me. I'll drop the ball for them in a minute. But Mommy always has to warn them to throw the ball quickly before I get impatient and grab it from them and make them cry. She was like a little mermaid girl... 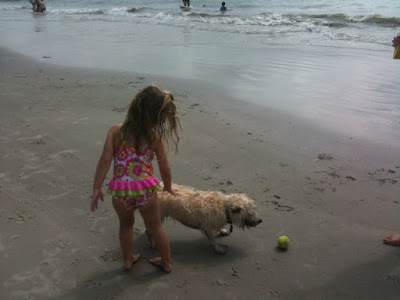 And then we met this crazy 2-year old Golden Retriever gal named Molly. She really loves her ball! She looked like a chicken sitting on an egg and try as you might, you couldn't get that ball out from under her! 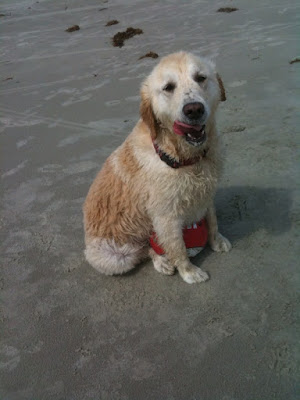 Once all eyes were on her, she'd get up and start rolling and rolling all over and under the ball! 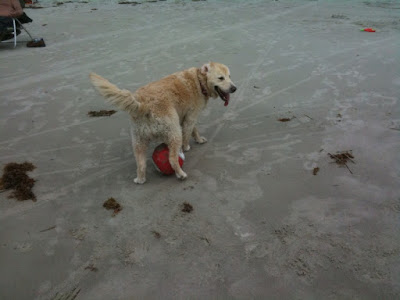 She was hilarious! A big goofy girl! 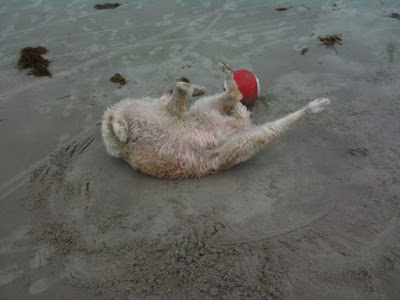 She sure knows how to show off for the camera. 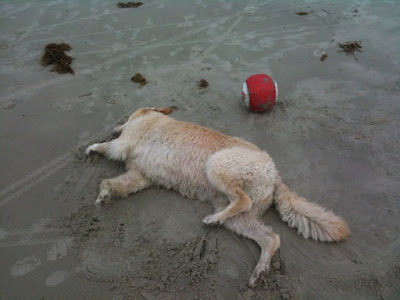 Well, off to Terrier Time this afternoon. Last week, we had 11 dogs there! Mom also took me to a swell dog park yesterday — Best Friends Dog Park - don't you love the name? We got to walk on a trail through the woods to get there, delicious smells for this city boy— then it was about 3 acres of woods and benches and doggie drinking fountains and dozens of nice muddy tennis balls. I could have stayed longer but Mommy was getting attacked by hummingbird-size mosquitoes. She's going to spray some Off! before we go back. It was a dream come true! The beach AND the huge dog park??? I may never go back!
Posted by Unknown at 11:43 AM

Wow what a great day you had. I wish I could come and play ball with you. I don't like water much though, so I am not sure about that part.

That has got to be one of the most beautiful beaches ever, Petey! you are so lucky!

That Golden girl and her ball are hilarious!

Petey! It looks like you are having a fabulous time! What a huge playground the beach is, with playmates of the 2 and 4 legged type! Molly is a hoot and that little mermaid probly loved her time as much as you did!!! You look like you are in your element! How lucky you are to be there! Wasn't there a time not too long ago that dogs weren't allowed? Or are we making that up? And, as for the hummingbirdskeeters, remind your Moma that they like sweet skin the best! That prolly means you need some "OFF!" too! We remember!

Missing ya, but so happy to imagine you at the beach...
Jake and Fergs xxoo
(You've gotta go home. You're missed there, too)

WHOA!! you are having a great time!!! That mermaid looks very cute..... And tell your Mom the pictures are very pretty!!! Keep having fun!! Lvoe A+A

Petey
don't say you'll nevew come back we miss you!!!!

Those photogwaphs awe simply gowgeous!
I will nevew tiwe of them. The beach looks pawfect all empty like that. Pawfect fow wunning and chasing youw ball, and that dog pawk must be heaven (xept mommi would be a wuss wif all the mosqutioes.
molly has a pwetty silly woutine..I kind of love it, hehehe
Keep having fun, but huwwy back
smoochie kisses
ASTA
pee ess when Awe you coming?Mommi aways fowgets

Khousin Merdie likes to roll about too!

Muzzer sends regreats that she missed you in New Yawk Petey. And she says to tell your Mom to try one of those new OFF fan thingies! She loves hers.

We love that beach - it looks so good. Enjoy your time there and in the woods.

What amazing photos. If you need any help playing with your tennis ball, just let me know.
Sally Ann

Ha! Ha! Molly sounds hilarious! The dog park does sound like heaven...can't wait to hear more about it!

Hi, Petey!
Thanks for sharing all those beautiful pictures!
Sure you are having a great time there!
The Golder girl sure knows how to roach!
Kisses and hugs
Lorenza

Great beach time, Petey. Molly looked like a real sweetie - did you play together at all? Nice sky shots too.

What a fabulous beach - looks like you had a great time - we want to come too! That Molly sure looked cute - a bit strange sitting on her ball - maybe she wanted it to hatch into many other balls?

Lovely photos - We can understand why you wouldn't ever want to leave!

Lots of licks
Sally and paddy

Petey, we are so jealous of your sunshine! We loved the beach pics and enjoyed meeting Molly - she looks like fun.
We are glad you are having a fun holiday - we like tidal pools too - we feel much safer with our little legs. Well it seems to be in the family Petey - we can see you would not want to go out in amongst those breakers without your surf board!
We have returned windswept - what would your mom's hair be like with lots of wind?
We really cannot keep our ears under control - even with the leave in conditioner.
Thank goodness for a wee dram.....
love you lots
Aunties Martha & Bailey xxxxxx

I understand getting impatient with the wee humans. They don't play right.

That golden girl is hot stuff.

Hey there Petey my mate!
You are right...Molly is quite cute! I can identify with her and her ball. We are practicing our football here at the moment and I too have learned to guard my ball...perhaps I should ask mom to blog about it sometime.
Anyway, those beaches look quite idyllic! Wish we were there. This MAXDOG has never actually seen the beach...wonder how I would react? But it's a bit far for our humans to travel with me....oh well.
Are you on holiday there, or what? DO YOU LIVE THERE? If so...do you have space for another dog?
Licks
MAXDOG IN SOUTH AFRICA

What a cutie Molly is! She sure does love her red ball! You must be having the best time, Petey! Your pictures are just beautiful!

Must be Petey week then if Mom is taking you to do all special things. Been in the bike basket too? We need a photo! Heavenly as it loks siwth cuties to play with and mates like Miss Molly please go back home eventually. Mica will be missing you. And eventually you'll be missing the kittie crunchies.

Looks GREAT!! I can't blame you for not wanting to go home!!

Petey looks like you are having fun! We just now found you. Dispatch does love his tennis ball too!

Oh D can totally relate to humid weather and bad hair days. Thank goodness for her it doesnt get very humid where we live.
Great pics Petey. You always look like your having a top time. How about meeting an airedale. That would have been the highlight for sure hehehehe.

Wow that dog has a BIG ball. Glad you are having fun and the tourists have all gone home.