So the finale of one of our favorite television shows was on the other night at the same time as the third presidential debate.
Since we already KNOW we're voting for Bark Obama, we watched Project Runway instead. Our friend Glenn (Bear's Dad) came over because Bear is down in Philadelphia directing an opera this month (Dogoletto?) and he needed a dog fix.  He's been working on an event in Hawaii and brought over some crazy promotional items.
Like this blinking lei! Do I look like the Big Kahounda? 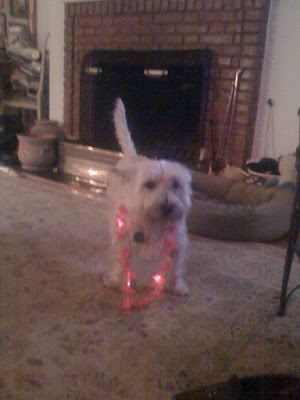 Inspired by the contestants of Project Runway, I quickly turned my lei into a Kenley-worthy headpiece. Now I really look like King of the Luau! 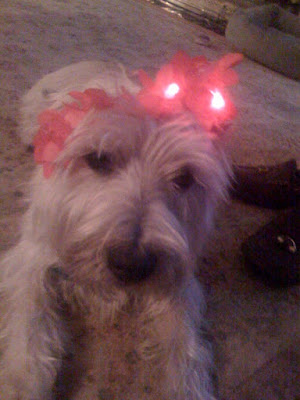 Mommy reminded me that she had created some canine couture for me when I was but a young pup. She knitted this handsome fisherman sweater with cables and everything. 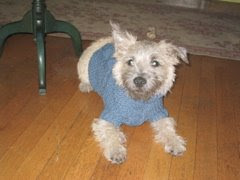 It's nice, huh? Only she forgot that boy dogs have different plumbing than female dogs so she'd have to wash it every time I wore it. I passed it on to my first girlfriend Ruby, who was a Westie. (We had kind of a Demi/Ashton relationship...) 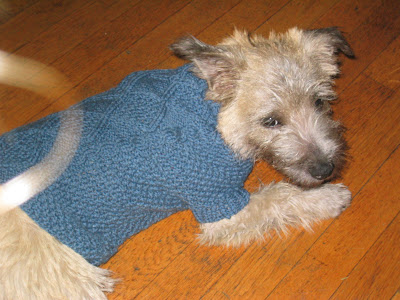 Then when I was a male model, I was in between sizes for this sharp Ekoo jacket so this one in the photo was custom-made for me. I could have won a spread in Dogue modeling this! 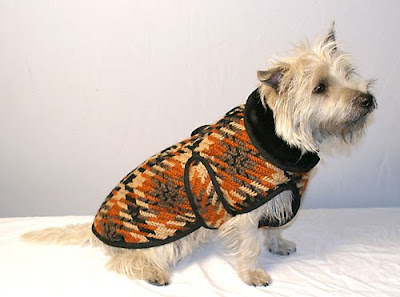 This one was custom-made for me too. I kinda hate it because it makes me look like a pimp, but I wore it in a fashion show for a fancy department store. I was "fur for fall" and the guy walking me was wearing a gold raincoat! Talk about looking like a couple of pimps! 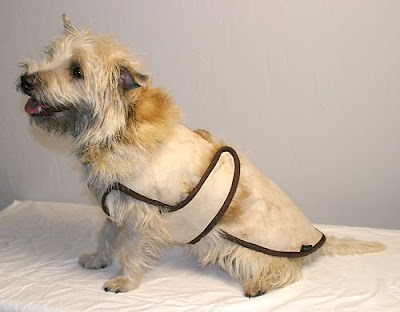 Of course, I think Lenny's mom should win Project DogRunway for her awesome YesWeCandanas! (Also known as Obamadanas!)
The fit, the craftsmanship, the eye for detail—in my opinion, she's the next Donna Cairn! 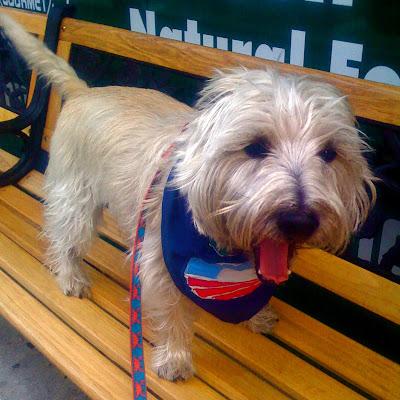 Have a fabulous, fashionable weekend! We're off to the Dog Fair in Central Bark tomorrow so I should have lots of great dog photos to post!
Posted by Unknown at 10:39 AM

Mom watched The Phillies win - she didn't want to have to look at the silly man making funny faces and gestures!!

Petey!! We didn't know you're fashion model!! You look stunning!

Have a lovely weekend!

Hey Petey: Muzzer went to the bookstore today (without us) and she wants to know were you the model for the cover of a book called "City Dog" ? She thinks it looks like you, but maybe shorter.

Forgive her if she is wrong, she is non-discriminating when it comes to dogs.

Petey, you are a born model matie. All those outfits look fab on you....well with the exeption of the pimp jacket....hmmm.

petey,
Mom and I loved watching Project Runway...and your impersonation of kenely is spot on...just don't act like her, ok? She was mean to Tim and no one should ever be mean to Tim!!!

I love the cabled sweater...that's a nice color on you!

Tasteful threads budy . Well apart from the pimp raincoat, did it have lots of pockets to stash the cash? Enjoy the dog fair..hmm wonder whatevr that is...

Hi, Petey!
This post was all fashion!
I hope you will have a pawesome weekend
Kisses and hugs
Lorenza

You're one of the best dressed doggies we know, Petey! Love that sweater! Have a great time in Central Bark! We can't wait to see pictures!

Hi, Petey! Thanks for visiting my blog. You are a very handsome model! I only own one t-shirt, but I wouldn't mind wearing some of those outfits. Would you mind if I linked your blog on mine so I can keep following your adventures.

Petey, you are a very handsome and professional model! We are very sad that Project Runway is over.

Petey you 're very elegant and you deserve fashion.
I love all.
ViVi & AB

Your outfits are terrific. That plaid thing is so sophisticated. My mom needs to get me a new coat this year. My old one is way too small and makes my bum look big.

You should be in Dogue.

Those coats look fabulously warm, and I love being warm. I am not a model tho so Mom just buys my stuff at Target :)