It's almost 4:00 pm on Monday afternoon. The golf course at the country club nearby is closed for maintenance and that means... it's TERRIER TIME!!!
Back in the bike basket I go and we're off to the 9th tee box to meet my Island doggie friends. 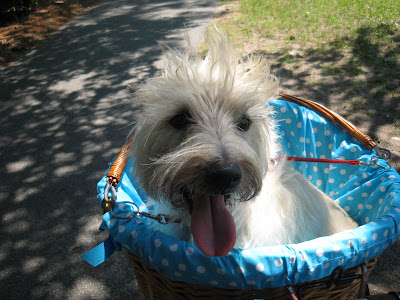 Here's Honey, our hostess. She had on her party bandana and she barks alot to make sure everyone's having a great time. I brought along a tennis ball and she liked to chase me as I chased the ball... 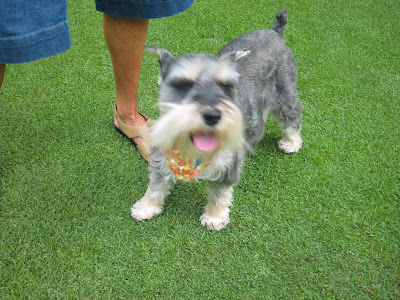 And this cute little Border Terrier is Maggie. Isn't she adorable? Border Terriers really do look like otters, don't they? She did an excellent job posing for the camera. (Once we told them that I had my own bloggie, they all wanted to be on it!) 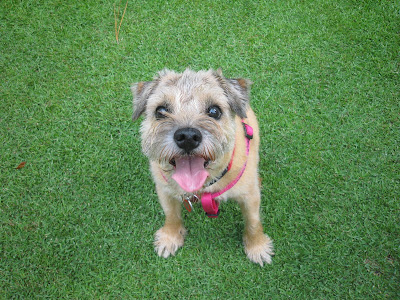 I'm taking a break while a couple more doggies arrive. These two Bichons are very friendly - we've met at Terrier Time before but I forgot their names!
The black dog looks so much like my buddy Bear, I ran right up to her before I realized "he" was actually a slightly smaller "she." That's Muffie. And the sparkling white Westie gal is Savannah. They were scoring snacks from Muffie's Dad. 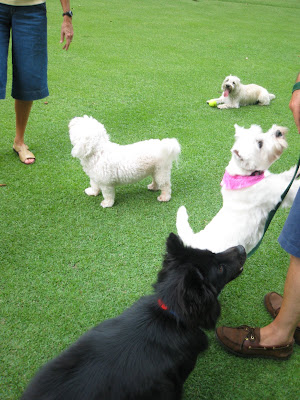 Muffie was jumping straight up in the air but Mommy could never capture it on film. Maggie just laughed at her. 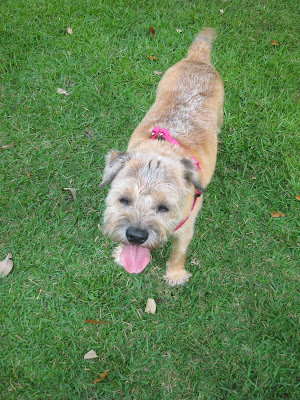 Isn't Muffie a pretty girl? She could be Bear's little sister! 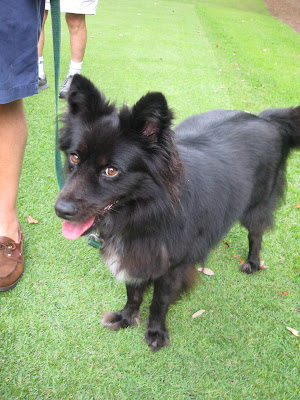 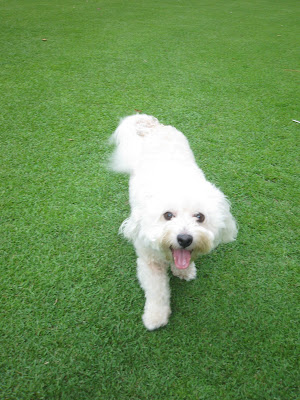 And here's Savannah, posing for the camera. Mommy and I went for a big long walk on the beach this morning and we met another little Westie girl named Daisy who is a friend of Savannah's! Now, granted, we're on an Island, but still - it's 15 miles long! 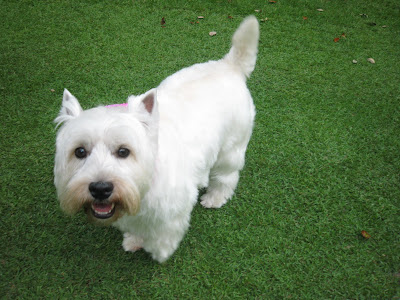 Ah Honey, try as you might, you can't catch me! Or get to the ball before I do! 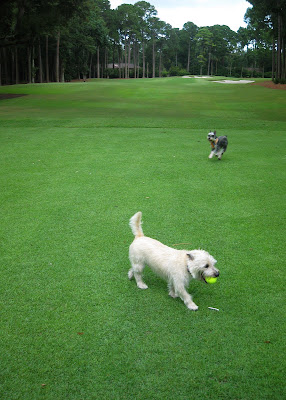 There were some rumbles of thunder, so Terrier Time ended early. But first, Honey wanted to try out my new bike basket. She wasn't so sure of it at first. 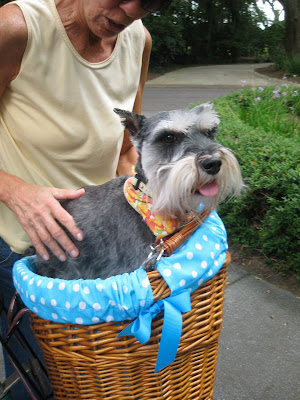 But then her Mom took her for a ride down the street and she just loved it too! Looks like we're going to have lots of biking doggies on the Island before too long! 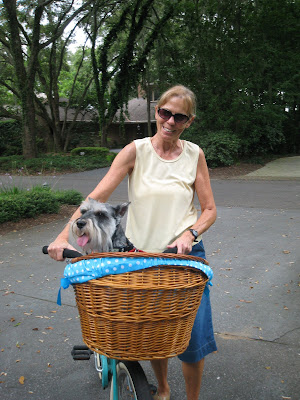 Honey insists on a bike liner that matches her fancy bandana! No problem!
P.S. We did get home before the thunderstorm hit. There was one incredibly LOUD clap of thunder that made both me and Mommy jump! So I sat her lap for the next hour to calm her down. After the storm passed, there was a rainbow that stretched all the way across the Island and a gorgeous fireball of a sunset. No photos...of course!
Posted by Unknown at 8:49 PM

Hi, Petey!
Sure you had a pawesome time with all your friends!
Glad you took care of your mom during the storm!
Kisses and hugs
Lorenza

That is a nice looking bunch of friends you have there Petey! I love your bike basket, but I think I would be way too big for it!
your pal, Morgan

That looked like a blast. Party, party!! Too bad the storm came, but I am glad you got home safe.

Great shots! Looks like you had a great time there. That's a nice bicycle basket!

Watch out for the Bison Freeze doggies. Two of them ganged up on me at playgroup once and freaked me out totally.

Hmmm....yesterday I could barely stand it....the cuteness I mean....but today I come to your bloggie and you're off meeting lots of pretty Island girls....and letting them get in your basket! Huh! I'm going to sleep upside-down for a whole day now....i'm feeling faint, a handsome fella like you needs to be careful you know!
(hehe, i'm not reeeeeally pouting....but I AM going to sleep upside down....just a bit)
Just laffin at Mango's comment.....he got bullied by a couple of little fluffy toydogs?!? Hehe....he only had to fart downwards to render them unconscious, surely??
Have fun....but remember you're a married man now!
Love,
Your Rosie-Posie xxxx

What a fun day with your friends...

Nice job taking care of your Mom during the thunderstorm...

I don't know what they would do without us...

What a pawsome day you had - and beautiful friends!!

I'll have to watch out on my khourse!

All I see are Khanada goosers and some bunnies and bambis!

That Bike Basket looks like a wonderful thing to have. Glad you have a "few" friends on the island.

As for our header, ya need to go back and see it now...Bruvver went to the zoo with Sus this weekend...and wouldn't take us...so he thought....

Oh, Mumsie wishes she were there on a bike with you guys...

hey PEtey--it looks like you REally LOVE the basket huh?

Hi Petey
Thanks for showing more of your wonderful basket, and also for including all those details about when commenting on my blog. I live in hope....
Terrier time sound great fun. I have a border terrier neighbour called Bonnie and I am going to tell her she looks like an otter. I wonder how she will react?
Cheers! H.

What a good assortment of little dogs! I has met a few border terriers, and they does make good playmates, I never seed an otter though so I casnot tell that. You all looked very clean and well groomed for terriers, shouldn't you have been getting all muddy and stuff?
~lickies, Ludo

Terrier fun time looks terrific, Do the golfers think so too?

You sure do ride in style in your doggie basket, Petey! Thank doG you made it home before the storm! What a nice looking bunch of friends!

Petey
I wouldn't blame you if you nevew came home to youw city place. That golf couwse suwe beats ouw wun to heck, hehehe
I can't wait till I see packs of hoomans all ovew hilton Head ,each on a bycicle wif a doggie in a basket. You stawt tewwific twends.

btw Petey, the way I eat ice cweam is a couple od tiny delicate licks(about an espwesso spoons wowf) I don't think that will make me ill, and ummm, doesn't yoguwt have daiwy in it??

Hi Petey,
WOW I am sure you had a great time with all your friends!! Muffie is gorgeous and the rest are all so cute!! Sorry the storm came and ruined the pawty..

I think the golf course should close everyday for terrier time. I sure hope you didn't stain a little when you heard that thunder, wouldn't want to mess up your new basket!