This is my new pal Buddy. He's a big old goofball puppy, about a year old. He's part black lab and (Mommy thinks) part pit bull. He's really sweet and loves to chase the ball as much as I do. 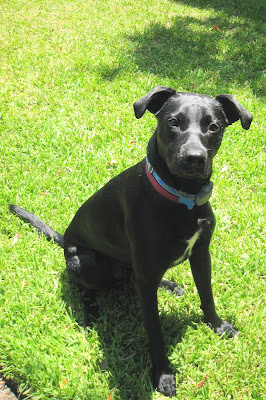 He also can lie down absolutely flat. Like a pancake. I can do a froggy position, but not as flat as this! 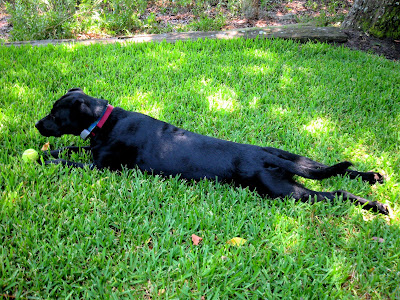 He sometimes mows me down when we're both going for the tennis ball, so I decided to look along the marsh where I thought we lost one the other day... 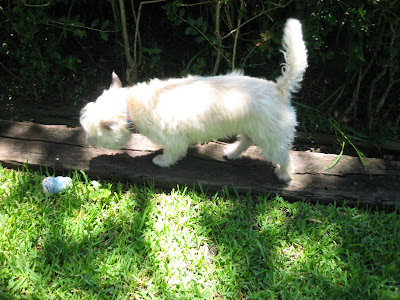 Look at the nice view from Buddy's back yard! The tide was almost all the way in. 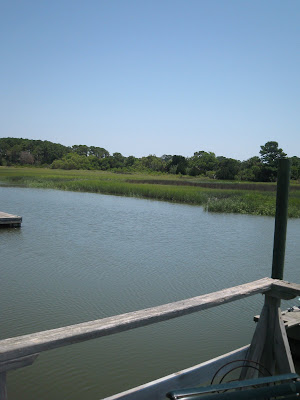 Hmmm, maybe we dropped the ball out here in the marsh? Whaddya mean you don't want me to dive headfirst into the fluff mud, Mommy? 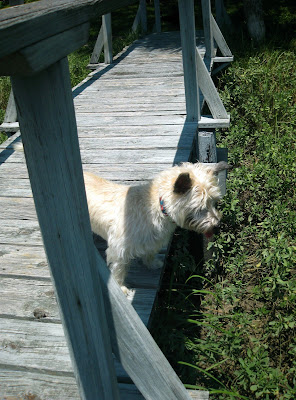 Buddy cools off his belly in the grass while I go on the ball search. 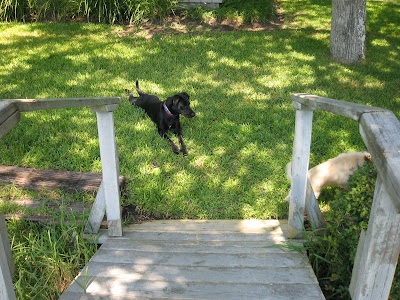 Mommy took some great videos, but we couldn't get them to load. Maybe tomorrow. Now look at silly Buddy—that's no way to hold onto a tennis ball. He's a lot of fun, when he's not clobbering me! 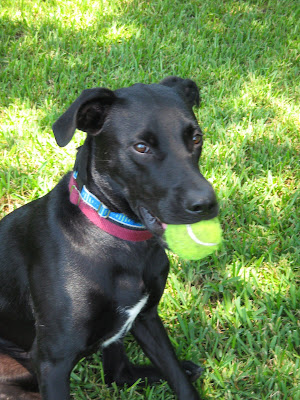 I went down to the beach again this morning and my new friend Brownie - a Yorkie/Chihuahua mix - came tearing down the beach to play with me. He likes to chase the dog that's chasing the ball. And a few minutes later, we were joined by a white terrier/Maltese mix named Casper. We three fellas had a grand time, getting every kid on the beach to throw the ball for us. Maybe we'll get some photos of them later this week!
Posted by Unknown at 10:32 PM

Buddy looks very nice ! It is so much fun when you can play with friends ! Enjoy ....
Kisses, Faya & Dyos

Buddy looks like a lot of fun - Paddy likes to play with a Bull Terrier in the park but gets mowed down too - I prefer to sit and watch and take treats from owners!

Your beach sounds lovely - we wish we could be there!

Lots of licks
Sally and Paddy

It sounds like you are making lots of friends. Buddy is a cutie.

Hi Petey
Thanks for introducing us to Buddy - so nice to have pals.
But Petey, you missed a trick there. Marsh mud is just the best. So black and so smelly. Take it from me, I live in Scotland so I'm an expert in bogs, swamps, fens marshes etc. etc.
Cheers, H.

Awwww your matie Buddy is a real cutie pie. He sounds like a lovely boy and we love how he lays down hehe.

A sturdy little guy like you should be able to stand up to a labradork. They can be annoying.

Once again, Mango has pawed his wisdom so furry well!

The Adventures of the LLB Gang said...

It is so awesome to have fun friends to run and play with isn't it?!

Buddy looks furry cool!
That how I hold my balls too.
~lickies, Ludo

Hey Petey! I'm wagging you have a new Buddy buddy. And get this - I made a new buddy called Buddy this week too!! But he's a puppy Sheltie. I sort of mowed him down in my excitement. Your Buddy's doing that downward dog position perfectly. Wonder how he gets up from that?

You are one lucky dog Petey. So many cool friends, so many cool places to play ball. I am jealous!

What a funny way of lying on your tummy! It sounds like you're having a blast playing ball with all sorts of new friends, Petey!

Looks like you had alot of fun with Buddy...

I'm glad you're having such a fun vacation...

So are we invited down for a run on the beachie???

Nice to meet you Buddy
What a cutie.
Petey you have made some faboolous fwiends in you second home..What a gwweat life!
smoochie kisses
ASTA

What a nice friend to have, Petey (esp. one with his own body of water! I'd be in there in a NY minute!). He is very cute.
Your pal,
Sedona

Buddy's a real cutie, Petey, along with being lots of fun. And that flat trick he does is great. I bet that he will have a lot of girl friends someday. Don't introduce him to Lacie. hehehehe...

Buddy is really cool - look at how flat he can get. Sounds like all you boys had a great time on the beach.

Hi dear Petey!!!
thanks to introducing us your new friend Buddy!!!!
Hi Buddyyyyyyyyyy!!!!Nice to meet you!!!
Look you had great time together and your beach seems sooooooooooooo wonderful!!!
Would love to be with you and having fun together!!!!
Pleaseeeeeee....can we come with you next time????
We love to know new friends!!!
;-)))))))))))))
Have a great time!!!
We love youuuuuuuuuuuuu!!!
Sweet kisses and licks!!!!
And our new sister send you special baby licks!!!
MUAHHHHHHHHHHHHHHH!!!!

Buddy gets really flat. That looks like a really messy good place to run around.

Have a great weekend.

I'm obsessed with tennis balls too! And hey - I would LOVE to see a photo of you with a "slobbery" tennis ball for my contest! :-)

Your buddy sure lies in a weird way...!

That Buddy can really stretch out. Bet the cool grass feels good on his belly. He looks like a lot of fun to play with.
Friends are good!
Ernie & Sasha