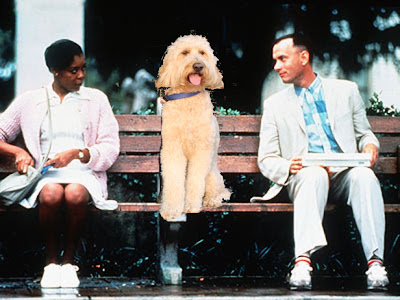 Well, my buddies Clive & Co. are still vacationing down in South Carolina while I'm sitting her in the rain in New York, waiting for the DWB convention to begin tomorrow!
Anyhow, we got a text message from NSLM's Mummy that they'd just arrived in beautiful and historic Beaufort, SC for a visit. (Film lovers may recognize Beaufort from The Big Chill, The Prince of Tides - read the book, says Mom - The Great Santini, and of course, Forrest Gump!
My good friend Lulubelle lives there too. Remember? I visited her and went to her Mom Nannette's awesome store Lulu Burgess over the winter. WELL...Mom calls Nannette (isn't that just the greatest name?) and tells her to be on the lookout for Clive & Co and Nannette replies "Wait a minute! I think I just saw them getting out of their car about half a block from my house!" and proceeds to describe the family and "the most adorable Goldendoodle!" Yep! It was them!
Everywhere he goes, people just seem to recognize Clive. Did you all have any idea he was quite so famous??? Don't think nearly as many people would recognize me in Ireland!
Posted by Unknown at 1:55 PM

I'm not surprised that he's getting recognized everywhere at all!

Next thing we'll hear is that Clive got casted in some movie! He'll be rich and famous before too long!

Clive may be more famous than you are, but we bet he wouldn't fit in that bike basket!

Hey there Petey
Yep...we understand the fame that can surround Clive and the NSLM. How wonderful to have them with you.
With love
MAXMOM IN SA

Of course people will recognise Clive. He is not only famous but he actually deserves to be!

He is so famous because he is so awesome! I bet you are having fun in NYC with all our pals.

How coool.Did Forest recognise him too? Mom says she has happy memeories of Beaufort - bet if she's ever lucky enough to return ands hop in Nannette's Lulu store she won't be recognised!

Happy BWB meet up today! Sending wiry love and smiles across the miles to everybloggie!

Hi there! Just dropped by to see how Clive & Co were getting on. I was dying to know! Thanks for sahring the news and the fab photos.